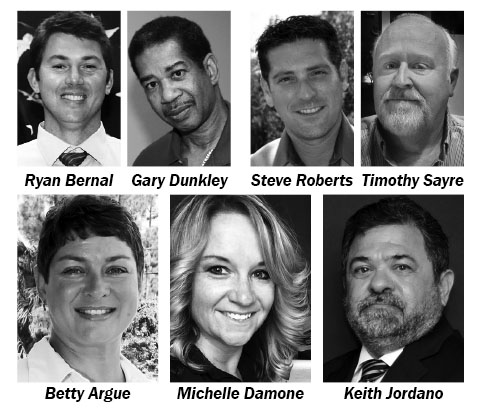 From now until the Aug. 30 primary election, the Town-Crier will ask questions each issue to the seven people running for two seats on the Indian Trail Improvement District Board of Supervisors. This week’s questions: How would you characterize the drainage services currently offered by the Indian Trail Improvement District? What improvements need to be made? How should such projects be funded?

Betty Argue — Drainage should be of paramount importance to the Indian Trail Improvement District for the health and safety of our residents. It is a primary responsibility of the district to the ITID taxpayer. Drainage services to the district include swales, canals, telemetry and drainage permits from the South Florida Water Management District. These services are paid by the ITID taxpayers and should protect all of our assets and home investments. Though many improvements were made as a result of the public outcry stemming from Tropical Storm Isaac, improvement continues to be needed in order to correct and catch up for the past 16 years of drainage infrastructure negligence.

As an ITID supervisor, I will support all efforts and work diligently to ensure increased drainage through the permitting process with SFWMD, obtaining drainage to the Moss property, as well as exploring additional drainage and storage options within the district. Our current engineer, Jay Foy, continues to be the best professional to be tasked with bringing our drainage systems up-to-date. I have confidence in the direction he has provided to the board of supervisors.

ITID needs the right leadership to prioritize rebuilding the infrastructure to ensure that the impact of a major rain event such as Tropical Storm Isaac is not repeated. Such leadership would not postpone critical projects nor would it allow our area to flood. It is worth reminding the voters that the Seat 4 incumbent was the president of the ITID board during Isaac. That lack of leadership left us underwater in The Acreage for at least two weeks!

Over the last four years, some improvements have been made, most notably by our governor stepping in through the SFWMD and forcing the J.W. Corbett Wildlife Management Area to honor its permitting levels so as not to jeopardize the northwest portions of The Acreage again. In addition, half of the Corbett berm has been constructed, with funding allocated this year towards the second half. Funding is still needed to complete the project. ITID has invested into clearing our small canals in order to battle erosion and increase capacity. We have also invested $1 million in improving Pump Station 2 so that we can reverse flow to the northwest into our impoundment area if needed.

No matter your feelings about the G.L. Homes plan, it includes contributing 640 acres for water storage to ITID. This component of that development is key to any future flooding conditions for our area, as water storage and discharge are key to meeting 100-year storm flooding standards.

The key to continue to improve drainage is to budget for specific projects and seek grant funding to match the budget allocated for a bright future ahead.

Keith Jordano — The drainage services need improvement. We need new and upgraded pumps, much better canal maintenance and better flow agreements with Royal Palm Beach and the South Florida Water Management District. Living in the Acreage for 17 years and growing up in New Orleans gives me the best prospective of what needs to be done and how to do it. I live on a canal, and it is overgrown. The banks are covered and cannot get easy access. We need the easements cleared for ease of access to do maintenance and repairs, as well as to make good paths for horses and other uses. The funding can come from better in-house management of taxes, the county, developers, the state, federal funds, bonds and grants. The current board has not used tax money where it was designed to go nor have they reach out to other sources to fund much-needed and overdue projects and maintenance. It is hurricane season, so another year we need to hold our breath.

Ryan Bernal — The drainage services should be measured by its greatest failures. When the community needed ITID’s water drainage the most in 2012, it failed us miserably. The alarming part is that the failure occurred during a calm tropical period where the area did not suffer from a large-scale hurricane since 2004.

One would think that since the devastating flood of 2012, ITID took all precautions necessary so it wouldn’t happen again, but did they? Since then, they have wasted taxpayer dollars needed for drainage to build, or begin and not finish 15 years later, projects like a dog park and the $8 million community park expansion.

What will happen when the developers begin to build and drainage becomes more of an uncertainty? ITID’s legal drainage limit and current local retention areas are inadequate. The developers are currently demanding that ITID residents pay more than our fair share of the financial burden of increased drainage needed. Our community deserves representatives who will negotiate in the best interest of our residents. We cannot trust current ITID board members who have taken money from the developers and their lobbyist. We need someone who is aligned with our interests and will protect our properties.

Funding for additional drainage should come from the developers. ITID residents being taxed more than their fair share is ridiculous. Developers should pick up their true portion of the cost. Grant funding should be utilized and the remainder of long-term funding should come from bonds while interest rates remain historically low.

Gary Dunkley — The drainage services provided by the Indian Trail Improvement District have always been a challenge because of regulatory agency restrictions levied on ITID and its residents, as well as balancing the drainage needs of our residents versus keeping water levels constant in our canals and easements. When we have a 10-inch or more rain event, that is when the rubber hits the road. These happen every several years or so. That is when we need drainage. This is an absolute. We do not ever want another flooding experience such as Isaac or October 1995 to happen again. Luckily, our staff of experts is working to make the pieces fit into the puzzle, which cover the needs of all of our residents.

Several developments in and surrounding The Acreage (Avenir, Westlake, G.L. Homes, etc.) will have a role in making sure drainage and storage do not affect current or future residents. ITID is currently working on a long-term plan in which several key components have already been implemented. Staff is clearing canals of debris ensuring constant flow, stabilizing roads, replacing culverts and seeking additional storage and/or discharge. The costs have been calculated in the current budgets available. Any additional costs will be analyzed and weighed for the benefit of all residents. Right now, all of South Florida is facing tremendous challenges where water is concerned. As an ITID board member, I will work with our experts to always ensure the health, safety and welfare of our residents. Balancing drainage and water is the job of the Indian Trail Improvement District first, foremost and always.

Steve Roberts — In the past five years, I have only witnessed a drainage problem once, during Tropical Storm Isaac. That was noted by the media as a once in a 100-year storm, and to all of our surprise, hit us very quickly. I do feel that with the newer developments that will be coming to The Acreage area, we will have less space for water retention and need to work with them to push for additional funding for maintenance and upkeep of the existing pumps.

I do not believe that the district should have to foot the bill for excessive usage, and with the amount of building we are facing, we will have limited space for the water to go should we encounter another storm of that caliber. I am not a professional water engineer, and I do believe that we need to listen to the current administration regarding the health of the ITID canals, equipment and pump stations so that we are not spending funds recklessly. We need to be smart with the repairs and be able to ask the questions so we are not just spending money on a temporary patch that will cost us double later. I would also like to see a more proactive approach to side roads with the swales being properly maintained, since we have so many vacant lots that are obstructing the water flow.

Timothy Sayre — The current drainage service is severely limited by the amount of water we are allowed to pump each day. This is not the fault of ITID, but needs to be continuously followed up by ITID until we have the right to pump an adequate amount of water to keep our residents from being flooded in an emergency, while also finding ways to store the water in impoundment areas to help replenish the aquifer as water is used by residents and their wells.

ITID needs to continue on with its improvement plan laid out by the engineer until we meet the needs of the community. We also need to look into the future to see what will be needed and start planning for that now and not when it becomes a necessity. The equipment, culverts, etc. need to be maintained and not allowed to fall into disrepair, and timely inspections need to be made to make sure that the equipment will operate when it is needed.

Water movement and improved drainage that affects the entire area should continue to be paid for out of the general fund.