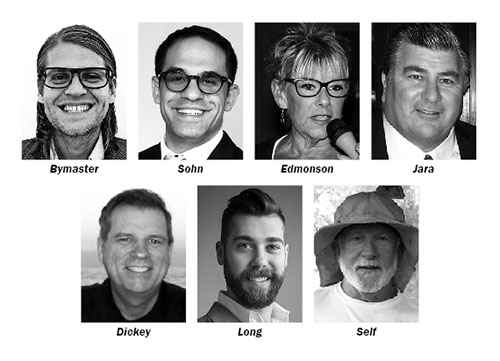 Voters will get a chance to choose among eight candidates for three available seats on the Palm Beach Soil & Water Conservation District Board of Supervisors in the Nov. 8 general election. The nonpartisan election is open to all Palm Beach County voters. The winners will serve a four-year term.

The candidates are: Matthew Bymaster and Daniel Sohn in Group 2; Patricia “Pat” Edmonson, Jesse Jackson and incumbent Stephen Joseph Jara in Group 3; and Karl Dickey, Rob Long and incumbent Dave Self in Group 4.

The Palm Beach Soil & Water Conservation District is a little-known local agency designed to “educate residents, land users and businesses on ways to protect our natural resources, promote best management practices and conserve, improve and sustain the environment,” according to its web site.

Although a public agency run by elected officials, the district does not have taxing authority. It operates as a not-for-profit organization and derives its financing from Palm Beach County and the Florida Department of Agriculture & Consumer Services.

Matthew Bymaster — Bymaster has joined several startup companies and worked his way up. He has a bachelor’s degree in industrial systems engineering from the University of Florida and is a lifetime resident of Palm Beach County.

Bymaster worked on a mushroom farm in New Jersey for a couple of months, which gave him a feel for the farming community. He is now working on a startup related to web development. If elected, he wants to increase the district’s transparency.

He wants to provide residents with up-to-date information, including posting meeting minutes online. Additionally, Bymaster wants to conduct an efficiency assessment to determine how much value the district brings to farmers in the Agricultural Reserve and to taxpayers, he said.

Previously, he and his brother started a company that cut the price of TV converter boxes for analog to digital sets in half and delivered more than 100,000 boxes around the nation. In 2010, Bymaster worked at a local commodities firm as an office manager, where he expanded the company to three offices and left as the chief operating officer in 2015.

“I have a history of success,” he said. “A history of helping out taxpayers and using funds efficiently. And I would like to continue on with that.”

Daniel Sohn — If elected, Sohn wants to promote responsible development and green development, and to expand the reach and involvement of the district.

Sohn has a history with nonprofit organizations, which he said will be an asset. He wants to expand the district’s budget, which is allotted by the state and county governments, by applying for grants.

“We need to be able to increase the visibility of this district,” Sohn said, “which requires money.”

He favors expanding the district’s ability to influence colleagues who can to make changes. The school board, property appraiser, county commissioners and municipalities should be educated on environmental and conservation issues by the district, he said.

Sohn also wants to bring environmental and conservation education into all schools. “We know the conversation about environmental issues begins in the classroom,” he said.

Getting the public involved in the conversation about the local environment is important to him. He plans to attend county commission meetings and partner with cities.

“I want to make Palm Beach [County] a cleaner and greener place to live, work and play,” Sohn said. “I need the voters to help me do that.”

Patricia “Pat” Edmonson — Edmonson has always lived in coastal cities. She was an elected official in Virginia Beach, Va., and, when she moved to Palm Beach County, became concerned with the local water quality.

“The current district is [agriculture]-centric and not paying a whole lot of attention to our current and very urgent water issues,” Edmonson said. “So that’s why I decided to run.”

If elected, Edmonson said she wants to help the county acquire land south of Lake Okeechobee so discharges of the lake’s water can flow south into the Everglades, closer to its historic flow. This new flow would decrease dirty freshwater mixing with saltwater and filter the water that would then flow into the Florida Bay, she said.

Additionally, Edmonson said that the district should be more transparent and open to the public. She wants to move the district’s meetings from the USDA offices into county meeting offices where the public can ask questions. She said there are many environmental and conservation issues that need to be addressed to the public.

Ensuring that the district’s current programs such as the Envirothon and school poster contest are well-publicized is also one of her concerns.

“People should vote for me because I get things done,” Edmonson said. “Activism is the rent we pay for living on this planet.”

Jesse Jackson — Jackson stresses that he is not a politician. He manages a company and oversees 20 employees, and he has worked in the private sector for more than 30 years.

Jackson has one issue he wishes to tackle if elected, which is to abolish the position and dissolve the district. He said that the district costs taxpayers $325,000 every year to keep it operational.

The best way to disband the district is from within, he said, as opposed to approaching county commissioners on the subject.

“It’s a waste of tax money,” Jackson said. “It is of little to no benefit to Palm Beach County and its citizens… This is just another example of bloated government.”

Jackson grew up on a farm and said he is well-versed on what it takes to raise crops and animals while taking care of the land. “Don’t abuse the land, but work with the land,” he said.

By voting to shut down the district, Jackson said, he is going to do what’s in the best interest of the citizens of Palm Beach County.

Stephen Joseph Jara — A native of Boynton Beach, incumbent Jara has experience in agriculture and business.

Previously, Jara worked in country club management and development, and now he is a Realtor at Golden Bear Realty. He also owns a cattle ranch and a tree farm in Okeechobee.

Jara was president of the South Palm Beach chapter of the Coastal Conservation Association, was on the board of directors of the Snook and Gamefish Foundation, and has Green designation for homes and properties from the National Association of Realtors.

Jara ran unsuccessfully for the Group 2 seat on the Palm Beach Soil & Water Conservation District board four years ago. About six months ago, he was appointed to the vacant Group 3 seat. Now he is hoping to be elected to a full term.

He said he will use his hands-on experience in agriculture and knowledge of best management practices to help educate the public on the district and its importance.

“I would also like to utilize my experience in assisting whatever agencies — state or federal — with the discharge from Lake Okeechobee into the estuaries, which caused the blue toxic algae,” he said.

Jara said the position is important to him because he can assist residents and business owners in Palm Beach County.

Karl Dickey — Dickey is a franchisor of dry-cleaning plants in South Florida and the mid-Atlantic states. He has run for political office before, he said, but has never been elected. He ran unsuccessfully for a seat on the Palm Beach Soil & Water Conservation District board in 2014.

Having gone to district board meetings on and off for a few years, Dickey believes that the agency needs to be more transparent. “It’s an agency that doesn’t get a lot of exposure,” he said, adding that he wants to increase the public’s awareness of the district.

If elected, Dickey also wants to address issues surrounding clean water and to encourage people in the farming industry to use more environmentally conscious fertilizers.

Dickey said that Palm Beach County residents should vote for him for the Group 4 seat because, “I’ve been around a while, and I know how to get things done.”

Rob Long — Long is running as part of a progressive slate with Sohn (Group 2) and Edmonson (Group 3). He said that together, they want to create an increased focus on environmental stewardship, public outreach and water resource management.

Long is a field engineer at a large insurance company, which sends him to commercial properties to assess the properties’ exposure to natural disasters and advise how to mitigate the risks.

He has a scientific engineering background and is a member of environmental volunteer groups, Delray Beach’s Green Implementation Advancement Board and the Palm Beach County Democratic Environmental Caucus.

If elected, Long wants to make the district more accessible and expand public outreach and education. He also wants to revamp its web site and create social media pages.

Long is generally against development in the Agricultural Reserve. He also wants to increase awareness of the causes of the toxic algae bloom from Lake Okeechobee and secure land south of the lake to create reservoirs.

“The repercussions of it are pretty scary to public health, the ecosystem and the economy,” he said of the algae bloom. “I think we can make a difference there.”

Long wants to change the board into something that makes a difference, and he thinks it could be doing a lot more than it does now.

Dave Self — Self, the Group 4 incumbent, has been in the nursery business since 1975 in Palm Beach County. “I’m a nursery man,” he said.

Self was president of the Florida Nursery, Growers and Landscape Association, was on the board of directors for the Society of American Florists, and is now a board member of the Western Palm Beach County Farm Bureau and a member of the Palm Beach Agricultural Enhancement Council.

Self has been appointed to the board twice in the past four years due to vacancies and is now running for a full term.

He said he wants to continue in the direction the district has been going and keep supporting the county commission in acting as a watchdog for the Agricultural Reserve and ensuring that farmers are adhering to best management practices. He also favors keeping the district involved in educating youth on environmental and conservation issues.

Self believes that if the district is abolished, the county would have to hire people to do the work that the district does.

“People get a lot in turn for our dedication and time,” he said. “I really like working with the district and the people there and what we do.”