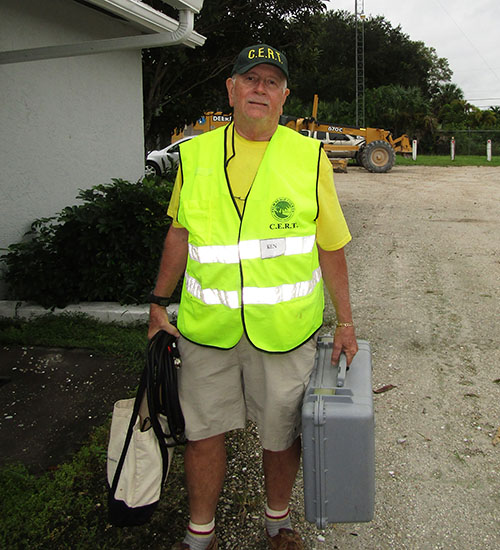 Hurricane Matthew caused minimal damage in the western communities, but the Loxahatchee Groves Community Emergency Response Team (CERT) was active the day after the storm passed by Palm Beach County, turning the event into an exercise for new members.

“Our team here in Loxahatchee Groves is having a really quick activation this morning for the newest members who have never been through a hurricane,” said CERT Director Ken Johnson, who was at the Loxahatchee Groves Water Control District Office on Friday morning preparing for the exercise as Hurricane Matthew worked its way up the Florida coast. “All of the members are going to drive a designated route, coming back to the base, which is on Okeechobee.”

The team members did a rapid impact assessment to get a feel for what’s going on when they do have to activate for an emergency. “It’s going to be a practice,” he said, adding that he was carrying ham radios for the team to use. “We’re going to talk to all the hams out there in Loxahatchee Groves. It’s going to be broadcast as a drill.”

Johnson said they would not be trying to communicate with hams to the north, but would monitor their communications in case they transmit a need.

“We will get word, and if anybody wants to go up there, they’re fine to go,” he said.

Johnson said that there are 10 ham radio operators in Loxahatchee Groves available.

“Anytime we put a team out there, a ham goes with them so we always have communication,” he said.

ABOVE: CERT Director Ken Johnson on his way into the Loxahatchee Groves Water Control District office in preparation for a post-hurricane exercise.