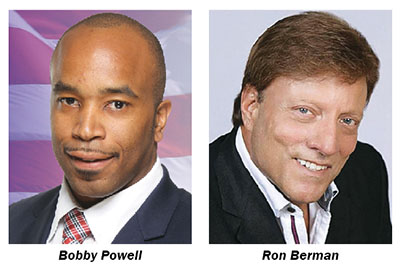 The newly redrawn and renumbered District 30 covers Royal Palm Beach, Loxahatchee Groves, eastern portions of The Acreage, the northeastern corner of Wellington and extends to the coast to include Jupiter to the north and Cloud Lake to the south.

A West Palm Beach resident, Powell is an urban and regional planner. He was elected to the Florida House of Representatives in 2012 and re-elected in 2014. He is the Democratic ranking member on the Transportation & Ports Subcommittee, and a member of the Agriculture & Natural Resources Appropriations Subcommittee, the Economic Affairs Committee and the Economic Development & Tourism Subcommittee.

Although out-financed by his opponent, Powell handily defeated Steinger by a two-to-one margin.

“We got through the preliminary battle, and now I’m running hard, strong and fast in the general election,” he said. “I’m working with other Democratic candidates because this race is no longer Democrat versus Democrat. It’s now Republican versus Democrat, and we’re both battling to see who will represent District 30.”

Powell said he decided to move from the House District 88 race to the District 30 Senate race because he felt he was the best-suited candidate.

“It’s an opportunity to serve a higher number of constituents and be accountable to those we are representing,” he said.

Powell is an advocate for clean air and water for current and future generations.

“We are stewards of that, and we need to have sustainable ideas for clean and renewable energy,” he said. “We have to make sure that we are responsible with our budgets so we’re not balancing our budgets on the backs of those who will be coming later, our children.”

He will also work to restore infrastructure that lagged behind during the recession, and assure that a fair amount of funding comes back to Palm Beach County, as he did as a state representative.

Powell wants to make sure that the county receives adequate money for education, including Palm Beach State College and Florida Atlantic University, and parity in education in public schools to educate children, and to grow a strong and healthy economy.

He considers the top issues of the campaign to be accountability and healthcare.

“People generally want to know that someone is going to represent them when it comes to the education of our community, that our children are properly educated; the economic impact to make sure that we have a strong and reliable workforce; and make sure that our communities are safe, clean, free of crime and free of environmental dangers,” Powell said.

As a representative, he considers some of his top accomplishments to be bringing more than $1 million to Palm Beach County for infrastructure projects, being a team player in the legislature, and fighting for affordable housing, quality healthcare and strong education.

“We got legislation passed with relation to sickle cell disease that allows funding to be added to the Closing the Gap program,” he said, noting one of his accomplishments.

He has also enjoyed taking students to Tallahassee each year to see how government works.

One of the most frustrating things for Powell this past session was the lack of Medicaid expansion.

He said people should vote for him because he is a sensible candidate who has served in the legislature and has worked for people, not just as a legislator but as a volunteer who has been a community servant, and has been a representative of the community as a whole.

Berman said that he is running because he is at a point in his life where he finally has the time.

“I’ve always had a keen interest in politics,” he said. “My minor in college was political science. I’ve been involved in campaigns helping other politicians for many years, but I was an attorney and business guy for decades, and really was too busy running companies to have time to run for office. I’m at a time in my life now where I’m not actively running any businesses anymore.”

Berman has been living and working in Palm Beach County for 21 years.

“I saw they did the redistricting and there would be an open State Senate district,” Berman said. “I decided this is the time. I’ve got the experience, I’ve got the skill-set to do it, I’ve got the passion and the desire, and the time to do it now.”

Originally from Michigan, Berman said he came to the area because it is one of the best locations in the state, if not the world.

“I wanted to go where there was sunshine, so I was thinking Florida or California, and ended up wrestling at the University of Florida,” he said. “On the weekends, I would go around the state to the beaches, which I was not familiar with growing up in Michigan. I decided that when I’m able to come back to Florida and live on the ocean, I’m going to do that, and 20 years later, I did.”

Berman said he is running to make a difference rather than start a career as a politician.

“I’m going to be 60 years old,” he said. “I’ve got kids and grandkids. I’ve decided to do this because I think I can make a difference. In fact, on the state level, you can accomplish more sometimes than on a national level affecting people’s daily lives. There are 40 state senators who are representing a state that’s almost 20 million people, and I fancy myself as a problem solver.”

He looked at problems that senators face on a regular basis and asked himself, “What can I do to make society better?”

“What I came up with, and these are nonpartisan issues, we all have the same problems,” he said. “I like to say we all want higher graduation, we want more employment, less drugs, less crime, less people incarcerated, less people on government assistance, and help your citizens mentally and physically. Now that I’ve identified that, what can I do to work toward making all of that better?”

One solution Berman believes in is to bring more vocational training to high schools.

“We have a 75 percent graduation rate, and of the kids that go to college, 40 percent of them never finish and they’re saddled with debt,” he said. “The ones who do graduate, six years later 37 percent of them are working in jobs that don’t require a college education.”

He said the push to get high school students into college leads to disenfranchisement and increases the dropout, unemployment, crime and government assistance rates.