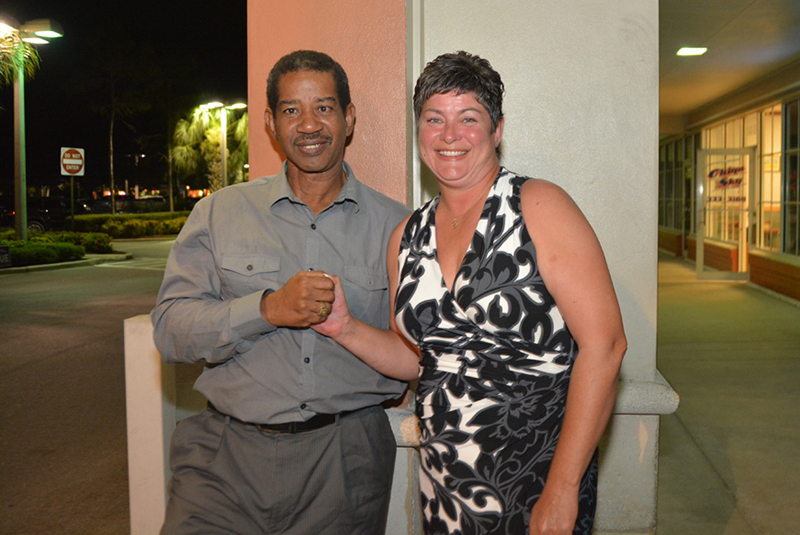 Incumbent Gary Dunkley and challenger Betty Argue claimed seats on the Indian Trail Improvement District Board of Supervisors after the votes were counted on Tuesday, Nov. 8.

“I’m really excited and looking forward to getting to work for the residents of the Indian Trail Improvement District,” Argue said after results came in Tuesday night.

Dunkley, who was first elected in 2012, thanked his supporters.

Dunkley said that maintaining adequate roads and canals and addressing encroaching development have always been his focus, and that was the message he sent in his campaign: “Infrastructure, drainage, roads and dealing with overdevelopment, being the voice of the people,” he told the Town-Crier on Wednesday.

The way to address those issues is for the board to become more cohesive, he said.

“We, as a board, have to come together and stop the petty bickering and focus on our target, and we have to come up with answers as a board, not as an individual,” Dunkley said. “That is what was missing before. There were these little petty fights that didn’t make sense, and it took us away from the problems that we had to solve.”

He said having Argue on the board would lead to less contention. “We need fresh eyes,” Dunkley said. “We have problems that we have to deal with.”

Dunkley said that he does not know Argue well, but he knows that they share many of the same ideals. They also were seen campaigning together often, and awaited results together Tuesday night at Kocomo’s Island Grill.

“She had volunteers, and I didn’t, so I kind of piggybacked off of her volunteers,” Dunkley said. “What is most important is that whether we agree or disagree, we can respect each other’s opinions. That’s for the good of the whole community.”

He said he’s elated at the decisive victory for both him and Argue.

“Yes, I am happy, but now it’s time to roll up my sleeves and start working,” Dunkley said.

In the future, he plans to work on term limits for ITID supervisors.

Argue, an active member of ALERTS (Acreage/Loxahatchee Engaged Residents Taking a Stand) of PBC, which has been fighting against overdevelopment, said her message to voters was the need to refocus the priorities of the board onto maintaining roads and negating the damage of the development around them.

“It’s who I am,” she said. “That’s what I’ve fought for. My campaign and concerns were different only in the respect as it relates to Indian Trail and the responsibilities of the supervisors.”

Argue said she anticipates that the board will be more cohesive with her as a member.

“I’m not saying that we’re going to be 100 percent on the same page, but we’ll be able to talk and… to work things out,” she said. “All our goals are the same, and that is the best interests of the community. I know that from talking to every single one of those board members. We’ll be able to work together well, and we can try to find common ground.”

Argue said that she is hearing the priorities from the community loud and clear.

“It doesn’t mean that we’re not going to do parks,” she said. “There were all kinds of terrible rumors that I’m against parks and spent all kinds of money on frivolous lawsuits. That’s just not the case, but does it mean I’m just going to be a pushover and kowtow to the county and the developers for what they want? No, I’m going to argue for what our authority and our rights are, and I’m going to argue for the best interests of our community, and I’m going to try to negotiate to mitigate the damages.”

Argue said that the new developers should be held responsible for using district roads that Acreage residents paid for.

“Why should we just turn them over when that’s our authority?” Argue asked rhetorically. “We have a fiduciary obligation to our taxpayers, so I’m going to keep the best interests of the district and the residents in mind at all times. It won’t be what the county and the developers want to happen, the easier, softer way.”

Argue said she is confident that the board will be able to turn things around, and that she will be a positive influence. “We’re going to clean up and focus on the right things,” she said.

She said she’s grateful for all the people who worked on her campaign. “I have received a tremendous amount of support. There were people out there every single day during early voting manning the polls, and people out talking to people and working behind the scenes trying to generate votes for me,” Argue said. “I’m very grateful for that support, and I’m humbled by it.”

She is also grateful for her husband, George, who kept their household together while she was campaigning.

“I’ve been gone campaigning for months now, since the primary election and before that, too,” Argue said. “It’s hard to do that when I’m a stay-at-home mom. We have a certain routine, and my kids are used to me being home. They’re used to me being with them 24/7. It has been a huge sacrifice for my family, and my husband was very supportive and picked up the pieces.”