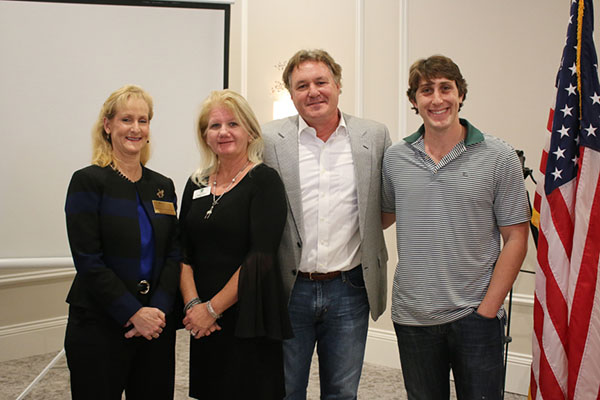 The Wellington Chamber of Commerce hosted its 10th annual kickoff to the equestrian and polo season luncheon at the Wanderers Club on Wednesday, featuring keynote speakers Mark Bellissimo and Noreen O’Sullivan.

O’Sullivan, representing the Gold Coast Dressage Association and Wellington Classic Dressage, has been involved in the sport for more than 20 years.

“It started as a hobby, it became my passion, and later, I guess you could say, it’s an obsession,” she said.

A financial advisor with Coastal Wealth, she has hosted, managed, coordinated and run many dressage events. “I truly understand the impact and the importance that equestrian sports have on our business community,” O’Sullivan said.

Gold Coast kicked off its season the weekend of Nov. 12, she said, at the Global Dressage Festival complex.

Last year, there were 2,600 horse-rider combinations, with participants from 23 countries besides the U.S. competing.

Equestrians, she said, are a well-educated group with a great deal of discretionary income.

“This will be an exciting qualifying year, as the 2017 FEI World Cup Dressage Finals will be hosted in Omaha, Nebraska, late March of 2017,” she said, noting that many important events will take place in Wellington.

Wellington will be hosting the Regional Championships and many other high-profile events that support the growth of the sport, O’Sullivan said.

“Visions are a dime a dozen. They’re easy to come by. Many people have them. The difference is the ability to execute them. Really, it’s surrounding yourself with amazing people,” Bellissimo said.

Equestrian sports have shifted from focusing on horse shows toward focusing on the industry since Bellissimo took over the Palm Beach International Equestrian Center in Wellington in 2007.

“In reality, it has been a great opportunity for us to redefine Wellington,” he said.

The connection with the community has been incredibly important, he explained, noting that the turning point was taking a horse show that sat in a community, but isolated, toward something that included the community.

Offering free admission allows the community to embrace and discover equestrian sports. Making the connection between human and horse accessible is one of the goals of Equestrian Sport Productions, Bellissimo’s horse show production company.

“How do we make it much more accessible and much more affordable for a broader group of people?” he asked.

In the next wave of action, Bellissimo said that they will be working to make equestrian sports more accessible. With the recent purchase of the Wanderers Club and the International Polo Club Palm Beach, Bellissimo’s partnership has invested close to $400 million in the community. They aren’t shying away from spending a great deal of money to achieve their goals.

“I think it’s the greatest investment in the history of equestrian sport in the context of an industry, not necessarily just in the event itself,” he said.

Bellissimo is excited to see what the future of the community can be.

“I do believe that we have just scraped the surface of the opportunity here,” he said.

Coming up on Feb. 4 is the 2017 Great Charity Challenge. The event has raised more than $9.2 million for local nonprofits over the past 8 years.

“Let’s be the community that challenges what we’re doing and creates a wonderful place for all families to enjoy, not only the wealthy of the wealthy, but also the people who live here every single day,” Bellissimo said.

Learn more about the 2017 Winter Equestrian Festival at www.pbiec.com.