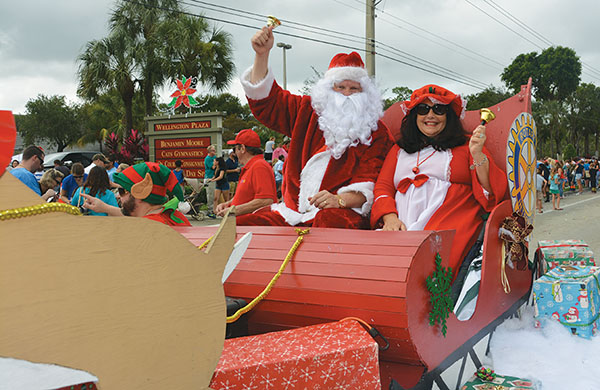 The Central Palm Beach County Chamber of Commerce and the Village of Wellington will host the 33rd annual Wellington Holiday Parade on Sunday, Dec. 11. The theme of this year’s parade is “Hollywood Movie Magic.”

“I love the theme,” Central Palm Beach County Chamber CEO Mary Lou Bedford said. “It was something that the staff come up with.”

Floats and performers are embracing the theme, she said, getting into the holiday spirit with movies that bring them back to memories of holidays during their childhood, or special holiday memories through the years.

Just a week away, residents and visitors will be able to see the magic created as dozens of marching bands, decorated floats, dancing groups and other sights to be seen will walk, dance and march their way along Forest Hill Blvd. from the original Wellington Mall to the Wellington Amphitheater.

The parade begins at 1:30 p.m., with roads closing at 1 p.m. Holiday Park, a special location with crafts, arts, food and music at the Wellington Amphitheater, will be open from 11 a.m. to 4 p.m.

This year’s master of ceremonies will be Ben Boynton, and parade judges will include Jim Sackett, Karen Cavanagh and Sal Delgreco. At 3:30 p.m., Santa will be arriving at the judge’s stand to mark the end of the parade.

Holiday Park will offer plenty for everyone, Wellington’s Cultural Programs & Facilities Manager Joe Piconcelli said. There will be vendors and music around the amphitheater.

The parade just keeps getting bigger and better each year, Piconcelli said.

“If you’ve been like I’ve been, back here since the very beginning, and saw it from when it originally started to where it is today, it’s an amazing event,” Piconcelli said.

Longtime chamber volunteer Dennis Witkowski put together the first parade and has chaired the event ever since.

“Every year we try to improve a little bit. I think we’ve managed to do it some way or another,” Witkowski said. “I can remember organizing the first one like it was yesterday. It has been a long time, but it’s just so near and dear to my heart. I get a lot of personal joy and satisfaction out of it every year.”

This year, the grand marshals will be Dance Theatre at Wellington’s DTX Dance Team, which recently was invited to dance at the 2016 Macy’s Thanksgiving Day Parade.

Part of the fun of the parade is being one of the thousands of spectators, where you can see all of the performers and floats going by. Bedford enjoys watching the spectators’ reactions.

“I always get excited to see the spectators,” she said. “They’re just incredible. They start getting there early in the morning — it’s like a family affair with multigenerational groups together.”

There’s tailgating, and neighbors, friends and family come together, some knowing one another, some not, and they bond while seeing different organizations within the community take part in the parade. “It captures the spirt of the holiday,” Bedford said.

The excitement is contagious as the parade is about to begin, and people can hear the helicopter flying overhead, Bedford explained.

This is Bedford’s second parade as the CEO of the chamber, but her sixth year taking part in the parade.

“The parade keeps getting better every year. We’re excited to have a lot of the entries that we’ve had in the past, and a lot of new entries as well,” she said.

It wouldn’t be possible, however, without the parade committee.

“Our committee is just phenomenal,” Bedford said. “Everyone does so much to make it a success. I really enjoy that aspect of it.”

“We’re going to have a really, really great parade,” Witkowski said. “I get excited about it every year because it’s the western communities’ finest hour. Everyone comes together. The spirit of the holidays is so evident. Everyone is filled with joy. The greatest joy that I get every year is watching the faces of the people along the parade route, and whether they have a relative in the parade or they’re just out enjoying being with the rest of the community, everyone’s in such a great mood.”

The chamber, he said, offers at least 10 scholarships to graduating high school students in the western communities as a result of the parade.

“We have an extra benefit that the community enjoys that most people aren’t even aware of,” he said, explaining that entry fees and sponsorships are used to fund the scholarships.

“Come early, get your seats. Parking is limited,” Piconcelli stressed. “Come to stay, because once you’re in, there’s no way of getting out until the parade is over.”

The parade is presented by the Schumacher Family of Dealerships, the Winter Equestrian Festival, the International Polo Club Palm Beach and the Global Dressage Festival.

ABOVE: As is tradition, the Wellington Rotary Club’s Santa Claus float will once again bring up the rear of the parade.