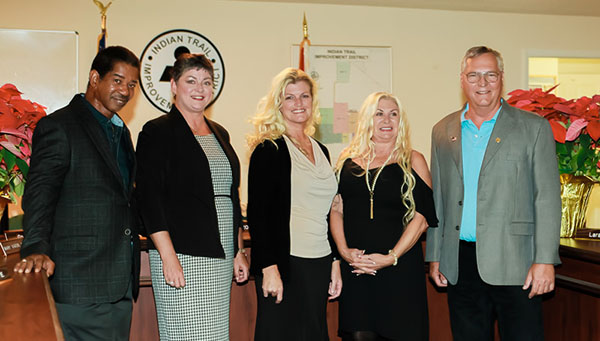 The Indian Trail Improvement District Board of Supervisors approved changes to Acreage Community Park last week that will combine several aspects of two phases into the first phase, including an amphitheater and a splash park, at the same cost.

At the Wednesday, Dec. 14 meeting, District Manager Jim Shallman said concerns had been raised over the cost of the parking lot for the south expansion at Acreage Community Park, and district and county representatives had come up with solutions.

“It involved a couple of changes in the elements, but it is a big improvement,” Shallman said.

Renee DeSantis with Craig A. Smith & Associates presented the recommended changes. “We have three options that we’re going to present tonight, and we need direction from you, the board, to proceed,” DeSantis said.

Option A was to proceed with the original site plan, option B was to move forward with a modified plan, and option C was to start over and rebuild the project.

Construction of the park is in two phases, and the consultants recommended moving some of the phase two plans into phase one in order to save money.

“By staying with the original site plan, that’s option A, the majority of the cost is being spent to totally remove and replace the existing parking lot,” DeSantis said. “Bathroom one is located too far from the active area of the park, and the band shell amphitheater is not included in phase one. Therefore, you could possibly lose $200,000 designated to that band shell. There is not a splash park that’s included, nor a concession stand.”

Bathroom one would be eliminated, but the electrical connections would remain enclosed in the same location as the original site plan. The band shell amphitheater, splash park, concession stand and bathroom two would be built in phase one instead of phase two.

“That way you would be able to possibly keep your $200,000 that’s dedicated for the band shell. Bathroom two, which is currently storage, will be modified to include a concession stand, and then we’ll add a splash park and a picnic area. Of course, a multipurpose field and the Garden of Hope will be as is. We feel that this modified plan and recommendation is a better investment, and it provides much more for your community.”

Option C would be starting from scratch and going through a complete rebidding process.

“The goal for tonight is for you to give us the direction on how to proceed,” DeSantis said. “We feel that to preserve the intentions of the integrity of the park, it is imperative that you decide on one of these options so that we can proceed.”

DeSantis added that she had met with builder Rosso Construction, and they had reviewed all of the proposed modifications.

“Rosso Construction did express that they can’t commit until you give direction on which option to proceed with,” she said. “The awarded contract as it exists today is budgeted at $3,389,776. If the board’s direction is to move forward on the recommended modifications, all modifications will be completed within that budgeted amount.”

DeSantis added that they are still looking at possibilities for outright ownership of the land rather than the long-term county lease that currently exists.

The consultants did not know the cost of completely rebidding the project, but that it could jeopardize some grants the district has, specifically one set aside for the amphitheater and band shell of $200,000, since it expires within six months. It also may delay the actual construction of the park several months.

Craig A. Smith consulting engineer Gene Schriner said that Rosso also wanted authorization for a member of the board or ITID staff to authorize the specified changes so that they don’t have to wait until the next board meeting to proceed.

“If he has to wait, he’s not interested,” Schriner said.

Shallman recommended option B, and the board members unanimously agreed. However, Supervisor Gary Dunkley said he was concerned about who was going to watch over the budget.

Supervisor Betty Argue said she was excited about option B because it adds value to the contract.

“I think that our community will be far more excited about it,” she said. “I have a concern, as Gary does, about motioning to authorize staff to make the modifications. I also understand the concerns of Rosso.”

Dunkley said his biggest concern is investing all the money building on land that the district does not own.

“I still don’t see a clear way of ownership,” he said. “I don’t feel secure about that.”

Consultants said they are working on ideas to get full ownership, but time restraints force them to move quickly, especially with the amphitheater project.

Argue said she would be willing to act as agent on behalf of the board to authorize the change orders for option B. Consultants pointed out that most of the changes are for less money, and Schriner said he would be glad to work with Argue.

“We’re actually getting many of the public benefits built in now for the same cost,” Argue said. “Once we do this phase, we could be done with this park, and we don’t need to do a whole lot more.”

Argue made a motion to authorize option B, and authorize herself to make administrative changes on behalf of the board, with legal approval, and the specification that the changes do not exceed the amount of the original contract. The motion carried 5-0.

ABOVE: The Indian Trail Improvement District Board of Supervisors swore in newly elected Seat 4 Supervisor Betty Argue and re-elected Seat 2 Supervisor Gary Dunkley on Wednesday, Dec. 14. Supervisor Jennifer Hager was chosen as president, while Dunkley was tapped for vice president and Argue as treasurer. ITID attorney Mary Viator will remain secretary. Argue was selected as representative to the Western Communities Council, while Dunkley was re-appointed as representative to the local chambers of commerce. (L-R) Dunkley, Argue, Hager, Supervisor Carol Jacobs and Supervisor Ralph Bair.