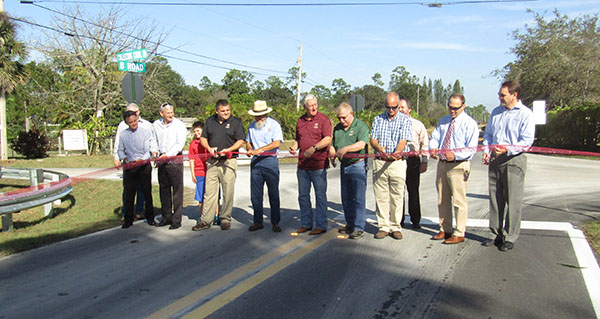 The Town of Loxahatchee Groves held a ribbon-cutting ceremony on Tuesday for the opening of B Road from the Palm Beach State College entrance to Okeechobee Blvd.

The road had been closed for several months while it was paved with asphalt. Culverts were placed underneath the road to allow drainage from swales on the side of the road opposite the canal.

The project evolved from the open-graded emulsified mix (OGEM) paving that has been used previously to asphalt with a rock base, on a recommendation from the town’s consultant.

The $1.2 million, 1.25-mile paving project came about because the developers at B Road and Southern Blvd. — Palm Beach State College, Atlantic Land Development and Solar Sportsystems — agreed to pitch in money for the town to do the paving.

The curbs and paving between Southern Blvd. and the college entrance were done by the developers themselves. “Part of our negotiation with both the developments at the corner of B Road and Southern were that they would pay whatever it took to pave B Road from Southern all the way to Okeechobee,” Mayor Dave Browning said. “They paid for the bridge; they did whatever they needed to improve B Road.”

Browning said that the town started the road project at about the same time that the Loxahatchee Groves Commons project started, which has been open several months. The B Road paving had a January completion date set.

“We were able to get a blacktop road and a thicker road rather than the original OGEM,” Browning said. “We were able to get drainage for the road to transfer the water to the canal… The town got a really good bargain in exchange for that commercial [development].”

He said that the council would probably look to future developers along Southern Blvd. to contribute to road improvements in the town, but probably not on as large a scale.

“That particular one was two very large developments, including the college, and they were going to impact that one road,” he said.

Browning believes that the town will use the road as a template, but did not anticipate as large a project next time.

“We won’t be able to get one development to pay for a whole road, but if we put them together, I think we can do the same thing,” he said.

Because of the increased traffic anticipated, Browning said it was important to have a sturdy road that would last a long time.

“We felt that between the college and the other developments, we would increase our traffic on B Road, therefore impacting our traffic and the residents,” he said.

Town Manager Bill Underwood said the agreement was the result of complex negotiations between the town and the three developers.

“We all had to decide who was going to fund what, when, and set up an escrow account, and we got that all worked out,” he said.

The town had its engineer, Keshavarz & Associates, design the road, and got a low bid from Hardrives Inc. The project was finished a month early.

“The original plan was an OGEM road, but at a better price for a better product, in fact a lower price, was to do asphalt paving,” Underwood said. “The three parties had to agree with the town in modifying the agreement.”

Underwood said the project under Hardrives moved along quickly, although there was discussion at the time about speed tables vs. speed bumps.

He expected much improved road drainage in the area.

“The original design was to put the catch basin in the road,” Underwood said. “We asked property owners along B Road if they could provide 10 feet for a swale and catch basin so we could actually have it off the road.”

Underwood added that most of the property owners along B Road have agreed.

ABOVE: Town officials gather with other VIPs to open the improved B Road.