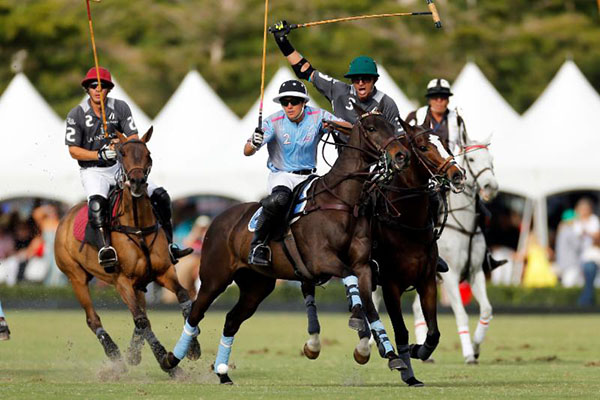 Week three of the 2017 polo season showcased the quarterfinals of the 2017 Joe Barry Memorial Cup at the International Polo Club Palm Beach. While attendees enjoyed social activities, La Indiana defeated Goose Creek 12-10 and secured a spot in the semifinals.

In the first chukker, fouls were the story for La Indiana, as the team committed five fouls, giving Mariano Gonzalez two early penalty goals and an early lead for his Goose Creek team. Goals from Jeff Hall and Mike Azzaro at the end of the first tied the game in what turned out to be a back-and-forth affair.

The game turned into a penalty shot battle between Gonzalez and Azzaro with a combined 21 penalty shots. With only three field goals combined between the two teams in the first half, the second half was going to be determined by which team could avoid fouling. The fourth chukker was close, with patron Michael Bickford adding a goal for La Indiana. Another penalty goal from Gonzalez as well as a penalty one goal for Goose Creek tied the game at 6-6.

During open play, La Indiana generated more scoring chances, shooting at the goal 14 times throughout the game. However, Goose Creek continued to place Azzaro on the penalty line, and in the final two chukkers he found his stroke, converting four of five penalty shots to put his La Indiana team ahead for good.

La Indiana was strong defensively against young Peke Gonzalez, who, at 16 years old, has been a bright spot for the Goose Creek team throughout the tournament. La Indiana kept him from scoring on the day and potentially making the difference in the close game. Azzaro was named MVP. Best Playing Pony went to Azucar, played by Peke Gonzalez.

Aside from the action on the field, the Pavilion kicked off another lavish brunch and after party. Guests saw new brunch options that allowed them to get closer to the action. For $25, brunch ticket holders were able to upgrade their seats to the front row. Beverage package add-ons allowed brunch goers to enhance their experience with bottles of Veuve Clicquot and Ketel One.

Guests also enjoyed the newly expanded Veuve Clicquot Champagne Garden. Opening at 1 p.m., the garden was the perfect spot to grab a drink before the Pavilion opened. Sponsored by Ketel One, the Ketel Kitchen held cocktail classes from 1:30 to 3 p.m. Each week, guests can attend the class, craft a specialty cocktail and receive a commemorative copper mug for $20.

Robbin Lee, CEO of Wellington Regional Medical Center, opened the game with the coin toss on the Engel & Völkers Championship Field. Joe Everson sang the National Anthem while painting a live action artwork. IPC showcased his art in front of the stadium next to the new retail location that had merchandise from Island Company.

The 2017 season runs from Jan. 1 through April 23. For more info., visit www.internationalpoloclub.com.