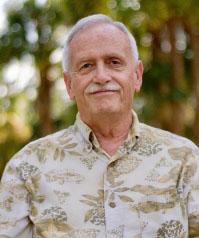 Seat 5 is the only council seat up for election this year. Goltzené and DeMarois will face off Tuesday, March 14.

DeMarois, a 31-year resident of Loxahatchee Groves, left the board in June 2016 when Simon Fernandez and Anita Kane won election to the LGWCD board. Former Supervisor John Ryan had chosen not to seek re-election.

DeMarois noted that he has a long history of working for the residents of Loxahatchee Groves, including getting county water utilities installed in some areas while he was a supervisor, which has helped lower fire insurance premiums for many residents.

“We did North Road, where they put in the piping underneath the water when they were going to do Scripps,” he said. “We got all of those canals re-dug. We got new embankments put in, and we got hydrants put in. That was a multimillion-dollar thing that we got for the citizens of Loxahatchee Groves. The fire hydrants saved on fire insurance for them, so we’re proud of that.”

He added that working with Palm Beach County, the district also had South F Road paved, and in the process opened up an equestrian trail.

“That was one of the first ones we had in Loxahatchee Groves,” DeMarois said. “We’ve been pro-equestrian all along, but it has been hard with our sparse funding that we couldn’t do a lot with it. Now that we’ve turned it over, we can get legislation for it with the help of the town. I think we’re going to be able to move pretty fast on that. At least that’s what I’m going to try for if I get elected. We should get some trails opened this year.”

He also wants to continue support for small agricultural interests in the town.

“Loxahatchee has always been like that ever since I’ve been around, and I started working with the fire department in 1976. It has been wide open, mostly agriculture and nurseries, and I support that. This is our last draw, I guess, in Palm Beach County. Unless they go west, there’s hardly any place else for them to operate with any acreage.”

DeMarois has also noticed more equestrians moving into Loxahatchee Groves, which is something he supports.

“We’re getting some people from Wellington who are developing some nice equestrian ranches out here,” he said.

DeMarois said he supports the transfer of LGWCD roads to the town so residents can get them paved more easily, because the town has access to funding to pave them, which the district does not other than through an assessment on residents.

DeMarois also supports some form of restitution to those residents on lettered roads who petitioned for bond referendums to have them paved.

He would also like to improve some of the private roads.

“We used to do that once before,” he said, noting that it has been difficult working with the town’s management companies on that issue. “Being on the council, I think we’re going to be able to work through those problems and make it better for everybody at a lower cost.”

DeMarois also wants to implement the recommendations of the Palm Beach County Inspector General, which include ensuring that state and federal laws are followed, the monitoring of all town contracts, adhering to its purchasing and payment policies, and making sure that vendors are properly insured and that they have proper approvals.

“I haven’t seen a whole lot done at this time,” he said.

DeMarois does not support the council’s recent imposition of a 30-mph speed limit on Okeechobee Blvd.

“I’ve ridden it in both directions today, and so far the average speed I’ve seen people do is around 40 mph,” he said. “I’ve seen deputies there, but not that many times, and I’ve not seen them pull anybody over yet. I’ve heard they have, but I haven’t seen any.”