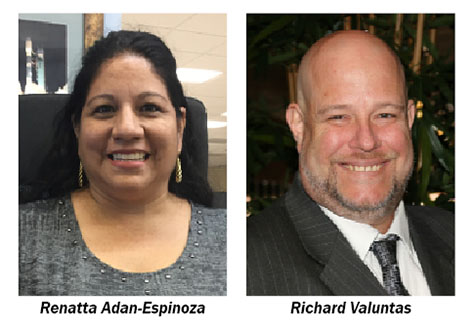 With a few days to go before filing closes, two challengers have come forward to take on the two Royal Palm Beach Village Council incumbents up for election.

Former Councilman Richard Valuntas, who lost his seat last year, is challenging Councilman David Swift in Group 2, while Renatta Adan-Espinoza, a member of the Royal Palm Beach Education Advisory Board, will challenge Councilwoman Jan Rodusky in Group 4. Rodusky was appointed to a vacant seat last year.

Filing closes at noon on Tuesday, Feb. 14. A televised candidate forum hosted by the Town-Crier is scheduled for Monday, Feb. 27 at 7 p.m. in the Village Meeting Hall. The election will take place Tuesday, March 14.

Espinoza, principal at the Academy for Positive Learning in Lake Worth, said she is running because she loves Royal Palm Beach.

“I’ve been a resident since 2002,” she said. “They’re doing a great job, but it seems when I’m at the meetings, there needs to be more going out and listening to the constituents.”

She wants the community to continue growing, with a diversity of businesses and a new generation of young residents.

As an educator, Espinoza is also concerned about maintaining high-quality schools by not only reaching out to them, as has been done on the Education Advisory Board, but getting feedback from parents as well.

“I love the Village of Royal Palm Beach, and it’s a great place to live,” she said. “I want to tell the constituents to come out and say what you have to say. Don’t be shy.”

Espinoza said that she has been told by residents that they have issues but are intimidated by public meetings. She encourages them to speak up. “The only way you can solve problems is to communicate, and then let’s try to solve it together,” she said.

Espinoza finds the Education Advisory Board meetings very exciting, with participation from local school presentations, as well as regular attendance by school officials.

“When we get a crowd, especially on the Education Advisory Board at the village, it’s phenomenal,” she said, explaining that parents and students of all ages comment to her about the meetings. “There is not enough said about the Village of Royal Palm Beach. We need to be at the schools to tell the people who we are and what we do for the village, and how we’re here to listen and help them. You need to have a friendly face.”

Espinoza also wants the council to talk more about its budget at meetings.

“At the last meeting, when they were talking about the speed bumps, you’ve got to look at your budget,” she said. “We’re very lucky to be a municipality that has a positive budget, because the budget has to be looked at constantly. There are two meetings a month, and one of the meetings has to be to look at the budget. I haven’t seen that yet.”

She said the Academy for Positive Learning, where she is principal, is a Title I charter school.

Espinoza said she tries to keep the governing board members active, involved and interested in the goings-on of the school. “They’re doing this for free, and it’s their time,” she said. “They’re volunteering, so I want to make it as important as anything.”

She said the school is big on “human caring” by taking benevolent trips to under-served countries, including Cuba, the Dominican Republic and Haiti.

“We were the first middle school to go to Cuba when [former] President Obama landed,” she said. “Our students, because they are Title I students, to go over, we have private companies donate money for the students’ trips.”

The students, in turn, collect school and personal supplies to take to the countries for distribution.

“The kids learn how to give back, not just where you live, but also to other countries and learn what is going on in other countries,” Espinoza said. “They learn a lot about what’s out there in the real world.”

Espinoza’s father worked for NASA at Cape Canaveral, and she was born in Cocoa Beach. She moved to Royal Palm Beach because she likes the environment, including the parks, activities for kids and her church, Our Lady Queen of Apostles.

Valuntas, an appellate attorney with the Office of the Attorney General, narrowly lost his seat last March to Councilwoman Selena Smith. After the election, he said that a number of people encouraged him to run again.

“A lot of folks are of the mind that the era of the career politician is over, and Dave has been there for 29 years, and that’s long enough,” Valuntas said. “Things have changed, and we need to change with the times.”

Valuntas said he was touched by the support he received after his loss last year.

“It was a really close election,” he said. “It wasn’t like I got blown out — 160 votes, and it was the biggest turnout we’ve ever had.”

Valuntas said there is what he considers unfinished business from his time on the council.

“I’m extremely interested in getting a quality senior housing facility in the village,” he said. “I know we went down that path, and when we went out for a [request for qualifications], we didn’t have any takers. I know it’s going back to the drawing board.”

Valuntas pointed out that his mother is turning 70, and he has to think about things like that.

“She’s fine and in great health, but you don’t know that that’s going to continue on forever, so I would like to have her close to me if that need ever arose,” he said. “I know it’s a concern among some of the seniors… that if they’re not independently able to stay in their home anymore, it would be nice to live somewhere within the community and not have to go too great of a distance where they lose touch and access to their friends and their support network.”

Valuntas is also concerned about traffic that will come with development out west.

“It would be nice to get with some of our neighboring communities to have a united front or strategy for the traffic that’s going to come,” he said. “Right now, Southern Blvd., getting home and getting to work is a nightmare due to all the construction that’s being necessitated by Cypress Key, which, finally, some of it’s going up. That’s a great thing, but I’d like to see it done. But another big question mark that’s out there is what are they going to do with the commercial part?”

Valuntas, who lives in that area, noted that the developer was trying recently to change the village’s ordinance to allow for a 40,000-square-foot Walmart grocery store across the street from single-family homes that he and his neighbors did not like.

“My opponent did, and he voted for it, so changing the law to accommodate even more density like that is not something I’m typically a proponent of,” Valuntas said, adding that another development under construction south of Southern Blvd. will also add to the congestion there. “It looks like there may be requests for more density, and I don’t think I’d be in favor of that.”

Valuntas remains concerned about the well-being of local schools.

“I’ve got three children in our local schools,” he said, noting that all his children went to Cypress Trails Elementary School with one still there, the eldest now at Western Academy and the middle child at Crestwood Middle School.

He credits the village’s Education Advisory Board with maintaining a close relationship with the local schools.

Valuntas said his accomplishments while a councilman included stopping the proposed use of red-light cameras, which turned out to be problematic because of legal challenges.

“The state law changed on it, so when I got on the council, they were going to amend the red-light ordinance to make it comply with the new state law,” he said. “Because of my educational background and experience, I was able to take a hard look at the issue and figure out that the evidence was not quite clear that it was necessary.”

Valuntas was also instrumental in getting portions of the village removed from the assessment roll of the Indian Trail Improvement District.

“They were assessing people down here without any legal authority whatsoever,” he said. “They weren’t doing anything. The village was the one that had taken over all that maintenance, and there was no basis for that assessment.”