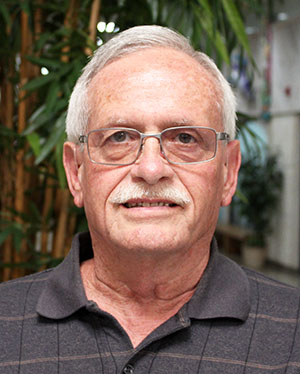 DeMarois served with the U.S. Army in Vietnam and later worked for 30 years with Palm Beach County Fire-Rescue. He spent much of his service with PBCFR working in the western communities. He also spent 33 years as a reserve deputy for the Palm Beach County Sheriff’s Office.

“That pretty much covers all I’ve done,” he said. “My record stands for itself.”

DeMarois is most well known in the town for his service on the LGWCD board for 19 years, including 14 as chairman. He was unseated in last year’s district election.

“The value that I have to the community and to the taxpayers is that I am going to try to work better with the water control district and the town, where we can save taxpayers money and give them a better value for their dollar,” he said.

When he joined the board in 1997, he noted that there weren’t any paved roads in Loxahatchee Groves. DeMarois worked to find funding to get shellrock for every road in the community and later county funding to pave some of the district’s roads.

When Scripps was going to be built north of The Acreage, and Palm Beach County decided to lay water lines in the area, DeMarois and the LGWCD board used the opportunity to improve the canals on North Road and bring fire hydrants to the area, saving residents on their insurance.

Cleaning out the canals in Loxahatchee Groves, decreasing flooding after major storms and automating district flood control equipment were additional important achievements, he said. Further, in his time on the board, DeMarois worked to put in place a procedure where residents of roads who wanted it could seek paving with open-graded emulsified mix, or OGEM.

“A lot of people, when I first got on the board, didn’t want modernization,” he said. “As more people moved in, their needs changed. That’s why we opened it up for OGEM. Quite a few people took advantage of it.”

DeMarois said he is concerned with town government activities and feels that he is a better person to fix problems than Goltzené, who he noted has had to recuse himself from a number of council votes due to his business interests in the area.

Loxahatchee Groves recently received feedback from the Palm Beach County Office of the Inspector General regarding how the town operates, DeMarois said. Implementing the suggestions from the OIG is something that he wants to accomplish as one of his top goals.

He also wants better council regulation of town management and hopes to have the LGWCD and the town government work together to save money, particularly on road maintenance.

DeMarois pointed out that the LGWCD and the town are both supported by tax dollars and should give residents the best value for services. The relationship between the two, he said, perhaps should change down the road, such as by the LGWCD being absorbed into the town.

“The Acme [Improvement District] did this with Wellington,” he said. “They did it right from the beginning, where we didn’t, but we have a problem there. Right now, if we wanted to do that, we’d have to [conduct a referendum]. I think at this time that wouldn’t go through.”

Town services, he said, are starting to pick up, where the town is learning to maintain roads properly. However, management problems are plaguing the town, DeMarois said.

“They’ve had management problems ever since the town incorporated. They’ve had several different managers in there. I think they’re on their fourth management company,” he said.

While the previous town management firm worked well with the LGWCD, DeMarois said that Underwood Management Services Group does not. A new town manager would be ideal, he said, suggesting that to protect the community, the town should have its own employees.

“Then, if it goes from management to management, you don’t lose everything when they walk out the door,” DeMarois said. “You don’t have to stop and start over all the time, and I think that’s one of the problems that they’ve had in the town’s 10-year history.”

DeMarois eventually sees Okeechobee Blvd. with more lanes through the town, which is almost guaranteed by the development to the west. “It has to be. We have all the development that’s coming out west. I perceive probably within two years they’re going to pave it once construction starts, and they start sales,” he said.

He sees limited additional development on Okeechobee Blvd. in Loxahatchee Groves. Allowing some commercial businesses on a case-by-case basis would be advantageous, DeMarois said. It would be a missed opportunity, with all of the future residents, to not provide commercial businesses, particularly those that serve the rural lifestyle.

Loxahatchee Groves’ budget, DeMarois said, is pretty good, but the money is sitting around and not working for residents.

“With the water district, for the 19 years I was there, we might have raised assessments no more than 10 percent,” he said. “We always had a safety backup, if something happened.”

DeMarois predicts that the nurseries in Loxahatchee Groves will do well in the next decade due to increased regional development, and equestrians coming from Wellington will continue developing properties in the town.

“I would like to see it as still a rural community where people can run businesses out of their own homes like they’ve been doing, but still serve these equestrian people, have those equestrian trails opened that we can do and have the agricultural,” DeMarois said. “So we maintain our community like it is. It’s a rare instance that we have here, Loxahatchee Groves in Palm Beach County. It’s something that I’d like to maintain if we can.”

DeMarois wants to win this election to help improve the town. Among those improvements is a long-term plan to pave the roads. “I’d rather pay for the roads as we go, get them when we can afford to get them, improve and maintain them all the time,” he said.

In 2006, DeMarois opposed the town’s incorporation because it was another layer of government that residents would be taxed on.

“At that time, I thought things were going pretty smooth. We had the Loxahatchee Groves Landowners’ Association that was representing us to the county, and they had done a good job,” he said. “Loxahatchee Groves has had a history of trying to slow down the development out here.”

Knowing what he knows now, DeMarois is unhappy that at the town’s 10-year mark, there have been four managers and not enough done to help the residents.

“They just haven’t caught their stride yet,” he said.

DeMarois hopes to work together and steer the council like he did the LGWCD board.

DeMarois feels that he is a better candidate for Seat 5 because of his background.

“As far as I’m concerned, my view is: What’s best for the taxpayers? What’s going to give them the best value?” he said.

“Personally, I don’t think that they should be there, but if I go in there, I will sit down and talk to them and say: ‘You have a clean slate. This is what I would expect. If you go forward, we’re going to work along fine. If you don’t, I’m going to address this to you… My goal would be to get a different management team if you can’t do that,’” DeMarois said.

DeMarois said his top strength is that he listens.

Goltzené, DeMarois said, has a finance background, which is a strength.

“One of his weaknesses is that he doesn’t use it to watch his manager, or he believes his manager is doing a good job,” DeMarois said.