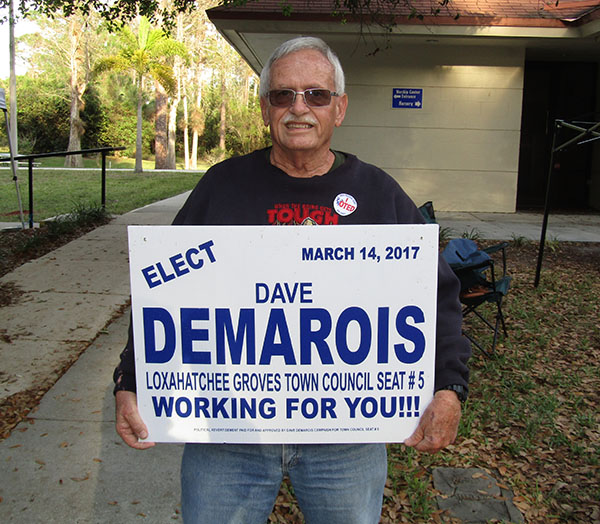 With his victory, DeMarois claimed a three-year term in Seat 5 on the Loxahatchee Groves Town Council.

DeMarois had 240 votes (52 percent) to Goltzené’s 221 votes (48 percent) in unofficial results Wednesday from the Palm Beach Supervisor of Elections Office.

DeMarois attributed a successful mail-out campaign as a major contributor to his victory.

“The campaign went smoothly,” he said. “We did two mail-outs. We did one just before the absentee ballots, and I think that’s the one that probably saved us.”

After some confusion with results at the Supervisor of Elections Office, DeMarois finally got a call from Town Attorney Michael Cirullo late Tuesday night telling him he had won.

Although DeMarois has a long history with the LGWCD board, he anticipates a learning curve as a council member.

“It’s a little different than the water district, so I’m just going to have to go in there with an open mind and learn and try to find out what’s going on there,” he said. “You hear all kinds of things from everybody, but it’s best to find out for yourself. I want to go in there and do just that.”

He expected to have meetings this week with Cirullo and Town Manager Bill Underwood in preparation for the upcoming council meeting on Tuesday.

In the campaign, DeMarois was sharply critical of Underwood’s leadership at the town. However, he said Wednesday that they have a cordial relationship.

“He has always treated me with respect, and I try to give him his respect, and we don’t have a problem,” DeMarois said of Underwood. “I talked with him when I was with the water district and tried to work a deal where we could work with the town… but it just never came about. At that time, he said he was probably going to be leaving the town in a couple of years, so I don’t really know what his intentions are until I get to talk to him when I get in there.”

After the learning curve, DeMarois said he wants to pursue the goals he outlined in his flier, which include providing a road policy that is fair to everyone, supporting equestrians and agricultural interests, and implementing all recommendations from the Palm Beach County Office of the Inspector General.

He pointed out that he wants to fully understand the implications of the $6 million road bond that passed on Tuesday.

“I want to talk to Bill and see what his feelings are and what he wants to do, and give him what my thoughts are on it,” DeMarois said. “I’ll try to sell my points to the council and see what we can do with them and if we can work together. I’d like to at least do something with the water district, get some answers and see if we can’t work together and save some money.”

DeMarois said he wants the town to keep its road contractor, Bergeron Land Development, but more as a backup to the LGWCD, which has historically maintained the roads.

“I think the water district can save us some money,” he said, pointing out that the council will now have three former LGWCD supervisors: Ron Jarriel, Dave Browning and himself.

“Dave Browning already called me this morning and said, ‘Congratulations,’” DeMarois said. “He has worked with me before, I’ve worked with him, we understand each other, and we have no problems. When we were on the district together, everything went smoothly, and I think everything’s going to go pretty good now.”

DeMarois added that Goltzené was a gentleman during the election process.

“I appreciated that,” he said. “We talked to each other and I said, ‘Congratulations if you win,’ and he said the same thing back.”

DeMarois said he got a great deal of feedback from his mail-outs, and he listened to respondents’ comments.

“On the Okeechobee [Blvd.] speed issue, I had about 35 percent against the 30 miles an hour, and I had about 25 percent for it,” he said. “I’ll see what the rest of the board thinks about it, but I’d like to put it back up to at least 40 mph if I can. I don’t know what they’ll do, but my goal is to change it to where everybody’s kind of uniform.”

However, he added that he understands the council’s logic in lowering the speed limit to reduce cut-through traffic, especially with the advent of new developments west of town.

DeMarois said that he is optimistic about improving relations between the town and the LGWCD.

“Most of the supervisors were very happy that I won, and they look forward to having a better relationship,” he said. “I had a couple of them helping me on my campaign.”

DeMarois wants to focus on getting everyone to work together.

“I want to do the best I can for the citizens, for the people who voted for me, and I want to try to keep the people on Goltzené’s side happy, too,” he said. “I want us to work together and make Loxahatchee Groves a productive place where everybody gets along.”