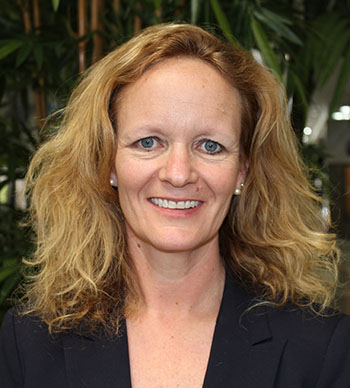 Councilwoman Jan Rodusky is seeking to continue her service on the Royal Palm Beach Village Council, asking voters to elect her to a complete term in Seat 4.

Rodusky was appointed to fill a council vacancy last spring. In her bid to keep the seat, Rodusky faces a challenge from education activist Renatta Adan-Espinoza. The election will be held Tuesday, March 14.

A Royal Palm Beach resident since 1996, Rodusky noted that she has the experience of being in office already, but is still learning the mechanics, dynamics and some of the history of the village that goes along with her position as a council member.

“The vision is a continuation of beautification. It’s a place where we are serving the public in a way that is safe,” Rodusky said. “Public safety is not just low crime, but it’s also quick response times. It’s great value and our code enforcement on top of issues.”

For the future of the village, Rodusky sees the opportunity to continue focusing on Royal Palm Beach’s identity for the residents.

“The future looks like a mobility plan that’s in place with art that is infused into the village, and it maintains that hometown feel, and it’s a place where people want to raise their families,” Rodusky said. “We will have services that we provide that are intergenerational, from youth all the way to seniors.”

With the additional one-cent sales tax that Palm Beach County voters passed in November, Rodusky said she has experience that will help the village handle the money that will come in because of the additional tax dollars. Municipalities such as Royal Palm Beach are slated to get some of that money.

“I think it’s about $2 million every year for the next 10 years or when it sunsets, making sure that those dollars are used to prioritize what’s in our capital improvement plan as well as capital projects we’ve got in the pipeline, as well as what we’ve got in the strategic plan,” Rodusky said. “It’s really important that we… use those dollars in the very best way we can.”

Another top priority for Rodusky is traffic issues in the village.

“We are in the middle of this traffic calming study. We are going to look at four roads right away. But, then we are also going to look at the policy, and what is that going for, for roads that we are not looking at today,” Rodusky said. “And then, how does that link into the mobility plan, and the other pieces of the mobility plan, [meaning] other vehicles, other public transportation, bicycles and pedestrians. What does that all look like, and how can we create a plan that is safe?”

Transportation issues are critical whenever the council is looking at future development, she said.

“If you look at the map of our village with our major thoroughfares and connector roads, we don’t have a lot,” Rodusky said. “So with every development that we create, every new development, whether it be single-family homes or multiples, we have to be concerned about how it affects the roads.”

Rodusky is the current chief grants officer for the Cultural Council of Palm Beach County. She noted that she has an eye for art and sees ways that Royal Palm Beach can continue to have more opportunities for arts and culture to be used in the community, architecturally and socially.

Rodusky was born and raised in Akron, Ohio. She received her master’s degree in public administration from Kent State University, where she met her husband, Andrew.

“While I was working on my master’s, I was hired by the City of University Heights, Ohio,” Rodusky said. “I finished an internship there and proceeded to work there for a couple of years, while my then boyfriend and soon-to-be husband was finishing up.”

Her husband got an opportunity to work in Philadelphia.

“It was whoever got the first job, that was where we were going to go,” Rodusky said. “So he won. We went to Philadelphia. And when I left the City of University Heights, I left with the key to the city. And I thought, ‘Well, this is what I want to do the rest of my life. I’m going to go work in municipal government,’” she recalled.

But, it wasn’t smooth sailing for Rodusky professionally, as she had trouble finding work in the Philadelphia area.

“I was on a short list for a county position in Bucks County that didn’t pan out,” Rodusky said. “We were there for about a year and a half.”

In the end, her husband did not like the job in Philadelphia, which eventually led them to Florida. “He was working for a consulting firm, and we came down to Florida in 1994,” she said.

While Rodusky still aspired to work in municipal government, she found herself on a different path.

“I ended up working in nonprofit organizations for about nine years in the fundraising side,” Rodusky said. “So I started. I cut my teeth with special events, then annual fund, then grant writing.”

Rodusky worked for Comprehensive Alcoholism Rehabilitation Programs, the Deaf Service Center of Palm Beach County and Intracoastal Health Systems, which evolved into the Palm Healthcare Foundation. During those years, she worked in nonprofit fundraising and grant writing.

Rodusky’s current job is with the Cultural Council of Palm Beach County, where she has been since 2008. She manages about $4 million each year for local nonprofit organizations.

She said it has been her dream job being able to give money away.

“I have often dreamed of winning the lottery, or Publishers Clearing House comes knocking on my door, and they’ll be there with the millions of dollars that I will use to start my foundation. I know exactly what I’m giving my money away to,” Rodusky said. “But, that whole notion of being a public servant and stewarding these dollars in the way that they are intended to is really important to me.”

Rodusky said with the past 20 years of experience she has accrued working with nonprofits and managing grant money for the purpose of providing for different communities and people, she has the experience for her position on the council.

“I have a pretty good knowledge of the strategic plan at this point, looking at the comprehensive plan, my master’s in public administration and my skills around really managing those dollars in a meaningful way,” Rodusky said.

She holds other positions in the community through other organizations, such as serving on the board of Leadership Palm Beach County and as a member of the Forum Club of the Palm Beaches, the Central Palm Beach County Chamber of Commerce and the Western Business Alliance.

“The other thing that I am connected to is the German Marshall Fund,” Rodusky said. “It’s an outfit out of Washington, D.C. It was created after World War II. It was a result of the Marshall Plan.”

For 40 years, the organization’s fellowship program has worked to connect young professionals from Europe and the United States.

“So, in 2008, I was selected to go through this program,” Rodusky said. “There have only been, I think we are up to three or four now, in Palm Beach County, young professionals who have been accepted into that program. I’m one of them. So creating those relationships, not just locally, but nationally and internationally, all those connections will hopefully help us become more familiar with each other, communication becomes easier, and solving problems is that much easier.”

Rodusky, who served for several years on the village’ Recreation Advisory Board before her council appointment, believes that she is a better choice than Espinoza, who serves on the village’s Education Advisory Board and works as a charter school principal. She did give Espinoza credit for her knowledge of school issues. “She is very passionate for education,” Rodusky said.

However, Rodusky feels that she is a more well-rounded choice for the council.

“I am an excellent listener,” she said. “I’m a bridge-builder. I am someone who can connect with many people in the community through various community engagement aspects, whether it’s a project or networking or picking up the phone and solving a problem.”