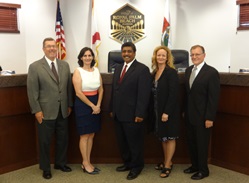 The Royal Palm Beach Village Council gave final approval to its new traffic calming policy on Thursday, March 2 with changes based on residents’ input at prior meetings.

The adoption was the result of several meetings to take comments from residents, after authorizing studies of four residential streets being used by cut-through traffic, largely to avoid heavy traffic on Royal Palm Beach Blvd.

“We’re still putting the final touches on the policy,” Mayor Fred Pinto said at the start of the discussion.

Village Engineer Chris Marsh said that village staff had made some changes based on direction from council members at previous meetings, which include enabling any resident or homeowners’ association to initiate an assessment of their street.

Consulting traffic engineer Bryan Kelley with Simmons & White said that at the council’s direction, they had changed the 50 percent plus one for approval to 33 percent for the initial approval of a study, and 66 percent for actual approval of traffic-calming measures for residents living on those streets.

“The study will include only those residents adjacent to the roadway link receiving the traffic calming, and this is the initial petition,” Kelley said. “Assuming that we get that initial 33 percent, the traffic study will be conducted with traffic counts, a speed study, a cut-through study and crash reports.”

“Residents will see exactly what they’re voting on,” Kelley said, adding that final approval must be by 66 percent of the residents in the study area.

If approved by residents, the traffic calming would be installed, then evaluated six months later for effectiveness.

Marsh pointed out that the initial 33 percent petition approval process had been bypassed for Sandpiper Avenue, La Mancha Avenue, Ponce De Leon Street and Sparrow Drive because it had already been determined that studies are warranted there.

Vice Mayor Jeff Hmara asked whether the consultant and staff had developed a scale of size for traffic study areas and approval.

Marsh said they would break up the roadways into logical links. “Once we get the data back from the traffic study, then we’d go from there and what links would look like for traffic calming,” he said.

“I look at elections; 66 percent is a landslide,” he said. “I wonder if the council might want to think more about 60 percent or some range like that. It seems like a difficult number if so many people are unengaged.”

Pinto said dividing long roads into segments for study and approval seemed like a logical process because one segment might not be affected by traffic as strongly as others, and approval by that smaller segment of residents would not be so difficult.

“If there are three phases, each one would have its own segmentation,” he said.

Councilwoman Selena Smith said she was not so concerned about a percentage for approval as having renters in the study area who might not be so interested in a study that they respond.

Village Manager Ray Liggins said homeowners versus renters would be tracked for possible consideration of the approval tabulation. “I don’t think it will be a high percentage,” Liggins said. “I don’t think [the renters] will be more than 20 percent. Once we get the data, and we’re looking at all these particular streets, if the council sees an issue there and wants to talk about the policy, I think we should deal with it at that time.”

Swift said he had walked Sandpiper Avenue and, in talking with residents, he found that about half want more law enforcement as opposed to traffic calming.

“I’ve had so many people tell me this is a simple problem, just add traffic police and the problem is solved,” he said.

Liggins said that anytime traffic officers are used to slow drivers down, it is temporary.

“The problem will never go away, and the people sitting in this audience who want the cars to slow down will still be here,” he said, adding that the use of law enforcement is very expensive, and would be done at the expense of more heavily traveled roads with a higher number of crashes.

“If you look at all of our roads, if you were to take those kinds of resources and put them on the roads, you wouldn’t put them here,” he said. “You would put them where you have the more serious accidents — on State Road 7, State Road 80, Okeechobee Blvd., Royal Palm Beach Blvd. — and you would be looking at changing driver behavior to reduce the number of serious accidents at intersections and things like that.”

Liggins added that traffic calming has been refined over the past 30 years and has come to be recognized as effective in slowing speeders down.

After more discussion, Hmara made a motion to approve the traffic calming policy but to reduce the percentage for final approval by residents from 66 percent to 60 percent, which carried 5-0.