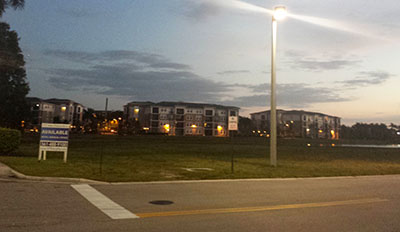 Wellington’s Planning, Zoning & Adjustment Board reviewed a proposal Wednesday to build a new hotel near the Mall at Wellington Green.

“The request is to amend certain conditions of approval to allow an additional 125-room hotel,” Project Manager Damian Newell said.

The Wellington Green Development of Regional Impact (DRI) was approved with seven multiple use planned developments (MUPDs) and one planned unit development zoning for the property at the southwest corner of Forest Hill Blvd. and State Road 7.

Originally, one hotel was permitted, Newell said, explaining that the Hampton Inn hotel was constructed within MUPD A.

“This request is to allow a second conditional use hotel within MUPD B,” Newell said.

The specific rules for the project’s DRI sunset on Dec. 31, 2016. With the sunset, he said, regional or state review is no longer required. From now on, only Wellington’s review of a development order is required.

MUPD B is currently zoned with a maximum 163,000 square feet, with approximately 89,425 square feet of retail and a 4,936-square-foot bank approved. To the west of the proposed hotel is Palm Tran’s Park-n-Ride parking lot, owned by Wellington, currently being used at less than 1 percent of its capacity, Newell said.

The village is working with the applicant to purchase the parking lot while still providing Palm Tran access to parking for a few years.

Access to the site is from Olive Drive and Wellington Green Drive.

The conditions for the proposed hotel include that it is not to exceed 72 feet in height; both hotels cannot have more than 250 rooms, including the existing hotel; each hotel and its accessory uses must be located in the same property; there would be amended uses for the Park-n-Ride facility, reducing the number of parking spaces used while providing the hotel with additional parking; and there must be a replat of the Park-n-Ride parking lot and hotel property.

The hotel would provide additional rooms for regional and national sporting events, equestrian events and specialized medical uses, according to the staff report. Village staff recommended approval with the conditions of the resolution to allow for a five-story 125-room hotel. The nearby Hampton Inn is a four-story, 122-room hotel. The proposed hotel is expected to be a Fairfield Inn.

Board Member Jeffrey Robbert asked about sidewalk connectivity, which staff member Cory Lyn Cramer said will be discussed within the Development Review Committee (DRC). Board Member Thomas Bueno suggested that both the nearby businesses and the rest of the mall would benefit from pedestrian access.

Jennifer Vail of the Wantman Group, on behalf of the applicant, Birch Development Ltd., noted that there would be additional access points and cross access as suggested, as well as parking around the hotel. The applicant, she said, also agreed to staff’s conditions.

During public comment, Dennis O’Shea, representing the owners of the Hampton Inn & Suites, said his client opposes the project.

The existing hotel is in Parcel A, O’Shea noted, while the proposed hotel would be in nearby Parcel B. He noted that a civil complaint on the matter was filed March 3, noting that his client was promised hotel exclusivity. The complaint, which was copied to the village, shows the declaration of covenants, a copy of the developer’s application, a copy of the interlocal agreement between Palm Beach County and Wellington, and other documentation.

Birch, he said, approached the owners of the Hampton Inn and offered to sell the land in Parcel B, but the existing hotel’s owners declined the offer. Now, O’Shea said, Birch wants to build a competing hotel where currently, only one hotel is allowed.

O’Shea asked that the matter be deferred until the court can review the complaint.

Village Attorney Laurie Cohen explained that this is a private dispute, which will be resolved through litigation. The board, she explained, must look at the task at hand and how it complies with elements set forth in the staff report.

Bueno asked about the possibility of making Olive Drive safer to cross. Cramer explained that staff is looking for different solutions, whether it be a raised walkway or crosswalk lights. However, those details will be determined during the site plan, Cramer said.