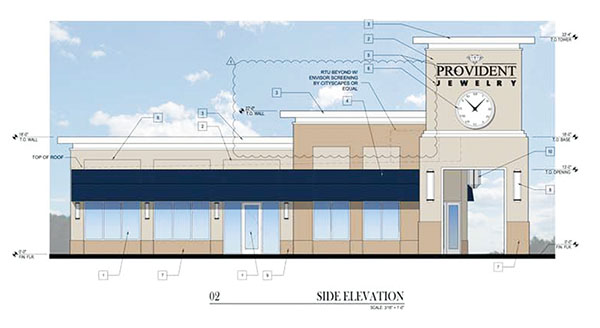 The formal review consisted of the request to move forward with all building materials and design features that were either already presented to the board or updated from the informal review meeting on Feb. 15 for both projects.

“I just want to say thank you for incorporating our vision into the buildings; both of them are very nice,” Board Member Ron Shamash said.

New topics of discussion focused on signage for both businesses. CVS originally met sign standards in the plaza. However, at village staff’s request, updates were made to the CVS monument sign to make it larger in proportion to the more than 13,000-square-foot building along Forest Hill Blvd.

There will also be a new multiple tenant monument sign facing the street along Forest Hill Blvd. This will be in proximity to the north entrance that is being reconstructed for improvements.

Provident Jewelry will not have a traditional monument sign. Rather, a distinctive clock tower is the main feature for Provident and the plaza.

“The tower is really the token element here of this location. It really is signage for Provident. It’s an anchor for the center and really ties down this design at the corner of the building,” said Stephan Claren of Claren Architecture + Design.

When the ARB met for the informal review of both future business locations last month, board members requested certain features to be changed or improved for CVS, with some smaller details to be updated for Provident.

John Bell of Robert Reid Wedding Architects & Planners, the architect for CVS, presented his updated renderings to the board.

“I’ve made some changes based on the points of recommendation, which was to raise the main towers up to 131 feet,” Bell said. “We broke up the massing by creating these key elements.”

Changes include the addition of diamond-shaped elements to break up the mass of the building walls.

That and other changes were made to the design blueprints because ARB members thought that there needed to be a better distinction for the hierarchy of the CVS location with the goal of making the building more aesthetically pleasing from all sides.

“We matched some of the items of the parapet similar to the Provident design to pick up a couple of elements from there as well, even though we’re an outparcel, and we don’t have all of the same elements and all the finishes, but we do have some of the elements of the shopping center,” Bell said.

Claren presented the updated renderings of the future Provident location in the shopping center.

“Staff had recommended that we raise the parapets, so we have raised the parapets that are next to our tower,” Claren said.

Provident will have an outdoor overhang that is to allow for future outdoor events.

Shamash made a motion, seconded by Board Member Tom Wenham, to approve the CVS and Provident Jewelry designs at Wellington Town Square, along with updates to exterior design features and signage. There was also a recommendation made by Shamash that all awnings be properly maintained. The motion passed unanimously.

Currently located in the main section of the plaza near Publix, the new CVS will be located on an outparcel near the corner of South Shore and Forest Hill boulevards, replacing the Star Liquors store that is there now. Provident Jewelry will move from its current location to the southernmost end of the plaza facing South Shore Blvd.

Both locations are a significant investment for one of the village’s oldest shopping centers. Wellington officials hope that it will be the beginning of updates and improvements to the entire plaza.

The new Provident location is the inspiration for the rest of the plaza, which includes blue awnings and tan walls.

“The intent is in the future to also renovate the rest of the center with this scheme, with these types of elements and all the architecture that we’re introducing here,” Claren said. “We are incorporating blue awnings. These are currently being replaced in the existing center in other places, so that color will be consistent from the get-go.”

ABOVE: The design of the new Provident Jewelry location includes a distinctive clock tower.