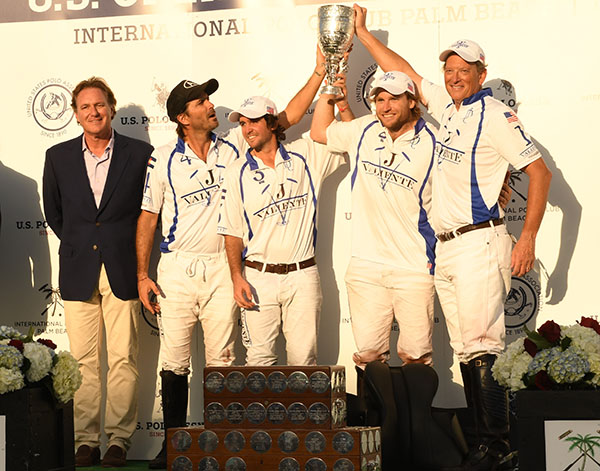 Valiente was striving for polo’s “triple crown” after having won the C.V. Whitney Cup and USPA Gold Cup earlier this season, while Orchard Hill was looking for back-to-back U.S. Open titles. The previous match-up between these two teams was a thrilling overtime affair that resulted in a Valiente comeback, but Orchard Hill was looking for a different outcome this time around.

The final was exciting from the first moment the ball left the umpire’s hand. Orchard Hill’s Polito Pieres took the throw-in and found Facundo Pieres on the end of a pass. Facundo bounced a shot in off the goal post to open the scoring less than 30 seconds into the game. After both teams traded penalty goals, with Facundo converting a penalty 4 for Orchard Hill and Diego Cavanagh converting a penalty 2 for Valiente, 10-goaler Adolfo Cambiaso drove downfield with time running out. Shooting from approximately 60 yards out, the ball sailed over the inside edge of the post, narrowly missing a goal.

The close game continued as Cavanagh took advantage of early fouls from Orchard Hill to score the first five Valiente goals, but Orchard Hill controlled open play. Polito scored his first goal of the game while Facundo scored his third goal to maintain a 4-4 tie after two chukkers. Juan Chavanne was making his impact felt on the game, pestering Cambiaso wherever he went on the field, allowing the Pieres cousins to keep the momentum in Orchard Hill’s favor.

Orchard Hill exploded in the third chukker, outscoring Valiente 5-2 and converting five of seven shot attempts. The emergence of Polito Pieres for Orchard Hill was a huge factor. He played his best game of the season, highlighted by a first half that saw him score four of his six goals and win six of his game-leading 11 throw-ins on the day to give Orchard Hill a 9-6 edge at halftime.

When play resumed, Valiente showed why it was the highest-scoring team of the 2017 season. Cambiaso scored off the first throw-in to cut the deficit to two goals. Matias Torres Zavaleta then hit a perfect backhand to set Cambiaso up for a breakaway and put pressure on Orchard Hill as its three-goal lead quickly shrank to just one goal. Just as it seemed Valiente would keep scoring, Polito Pieres snuck up behind Cambiaso and stole the ball, springing himself on a breakaway of his own to give some momentum back to Orchard Hill. However, Valiente had hit its stride and won the fifth chukker 2-0 to tie the game up at 11-11, setting up a thrilling sixth chukker.

After Cambiaso gave Valiente its first lead of the game with his fifth goal, Cavanagh had a penalty 3 opportunity to extend the lead to two with less than three minutes remaining, but was unable to convert. Polito Pieres answered by taking a Facundo backhand and hit a cut shot from 40 yards out that just found its way inside the goal post to tie the game. Seconds before the final horn, Facundo Pieres caught Cavanagh on a turn near the Valiente goal. After a reversed call and a challenge, Orchard Hill had a penalty 4 opportunity. The ball sailed over the post just wide, throwing the game into overtime.

After six chukkers, Orchard Hill had shot a very efficient 11-of-15 from the field, while winning the throw-in battle 20-9, potentially giving them a slight edge heading into overtime. The fast-paced action never stopped. Facundo and Polito Pieres both made runs at goal for Orchard Hill, while Cambiaso missed a goal by inches on a shot from 40 yards out. After the ball went out of play approximately 100 yards from the Orchard Hill goal, Cavanagh broke out of the pack and ran to goal, slamming the ball through for his seventh goal of the game, handing Valiente the 13-12 victory and the 2017 U.S. Open Polo Championship title in one of the most thrilling games of the season.

Normally the U.S. Open final concludes the winter polo season at IPC, but this year brings an added tournament. Sunday, April 30, will feature the Federation of International Polo (FIP) Zone “A” World Championship Playoffs. Team USA will once again compete for the opportunity to win one of the eight slots in the FIP World Polo Championship, culminating in Sydney, Australia in October.

The cost to watch the game is only $5 a carload, and the first 40 tailgaters who reserve online can attend free of charge. Sunday brunch at the Pavilion will be available for $65 per person.