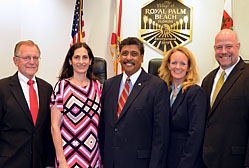 The Royal Palm Beach Village Council approved the first reading of an ordinance last week to revise flood plain maps for the village that greatly reduce the number of structures considered at risk during exceptionally wet storms.

The new versions, created in response to the Federal Emergency Management Agency’s flood plain maps introduced after Tropical Storm Isaac, would reduce the number of buildings at risk from about 8,000 to approximately 600.

At the council’s April 20 meeting, Village Engineer Chris Marsh said the current maps used by the village are from 1982, which are largely inaccurate.

In updating the maps, FEMA initially released versions that were grossly inaccurate.

“The county was prepared to sue them, FEMA pulled back, and then there was an issue bringing those back because of the Lake Okeechobee dike, so that further delayed it,” Marsh said. “They were working on a breach analysis, and then finally, in 2013, they brought maps back to us, and those maps weren’t great.”

They showed about 70 percent of the village within the special flood hazard area. In June 2013, the village submitted an appeal to FEMA, along with many other local agencies, including Palm Beach County.

“We felt that these maps simply weren’t accurate,” Marsh said. “After reviewing the data from the village, the South Florida Water Management District, the county and other agencies, FEMA decided to revise these maps, which was a good thing.”

Fortunately for the village, the SFWMD at the time was conducting a study of the C-51 Canal, which controls water not only in Royal Palm Beach, but across the central part of the county, Marsh said.

“FEMA was willing to wait for that study to get completed, and then redo the maps,” he said. “It actually allowed a lot of input from the village, which was good, because new developments were updated and there was new data that was added to these maps.”

As a result, the village was able to reduce the affected structures to about 5 percent, or 600 buildings, within the special flood hazard area.

Elevating properties would entitle them to lower insurance rates, enable less expensive cleanup and improve the overall score for the village, Marsh said, adding that the Florida Building Code is in the process of adopting these measures, so the village would have had to do it at some point.

“It’s definitely a good thing to give ourselves a little bit of leeway in these storms,” he said.

Mayor Fred Pinto asked if the new residential project at the old wastewater treatment plant site would be affected. Marsh said new developments are controlled by SFWMD permits, which generally require elevations about a foot above the flood hazard threshold.

“That’s something that I’ve been looking at and recommending, but they’re well above it at the baseline elevation in that area,” Marsh said.

He said the amended code will reduce the threshold of substantial damage from 50 percent to 49 percent damage to a structure to require complete rebuilding.

“What that means is if you have a home impacted, and it doesn’t have to be flooding, it could be a hurricane or a fire, but if that home is in a special flood hazard area, and more than 49 percent of the value of that home at the time is damaged, in order to get a building permit, they have to elevate out of the special flood hazard area,” he said.

“What we know from the survey data that they have from the aerial photography, these homes may be below it,” Liggins said. “It kind of red-flags them, and then if there’s anything needed, they have to do survey elevations and get an actual elevation to see where they are.”

If the ground around the building is low, Liggins said, they don’t necessarily know whether the structure itself is above the flood hazard level.

“We don’t know what the finished floor is,” he said. “Surveys would have to be done. We know that. They’re on average 6 inches higher than the ground around them, so how many of those 600 are actually above the base flood, we don’t know.”

Marsh said the digitized maps allow them to do a quick analysis of the status of the structures.

Marsh said the LOMA includes an elevation certificate proving that the property is above the flood hazard area.

The flood hazard map has been posted to the village’s web site at www.royalpalmbeach.com with a link on the left side in yellow titled “RPB Flood Zone Map.”