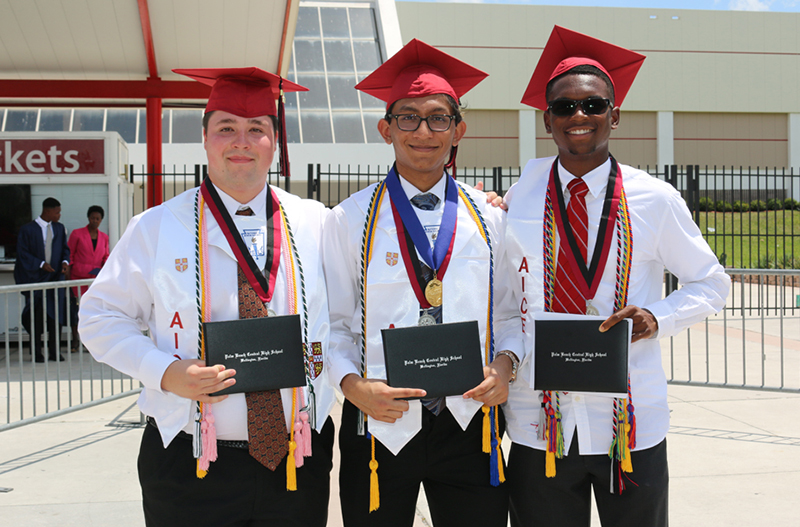 Palm Beach Central High School’s Class of 2017 started a new chapter of their lives Tuesday, May 23 when they moved their tassels from right to left and officially became high school graduates.

Their commencement ceremony, four long years in the making, began with a processional as the seniors entered the South Florida Fairgrounds Expo Center in lines to the music of the Palm Beach Central High School Band, directed by James Yaques.

They waved to friends and family before participating in the Pledge of Allegiance, led by Student Government Association President Summer Boltz, which was followed by the national anthem sung by the Senior Ensemble.

“To the Class of 2017, it is my great honor to celebrate this day with you — graduation. As principal, I would like to share wisdom that will inspire and motivate you to accomplish wonderful things,” Principal Darren Edgecomb said.

Before continuing with the ceremony, he asked for a moment of silence for five departed students who were not able to graduate with their class: Sharlynn Calle, Dalton Dobkins, Robert Griffey, Kenneth Mahr and Aaron Valle.

Edgecomb told both his personal story and the school story.

“As Broncos, the setting for your story has evolved over the last four years,” he said. “For the majority, the classroom set the stage for numerous accolades and accomplishments.”

Whether it was the Pathfinder Scholarship; the National Merit Scholarship; state championships in band and cheerleading; boys tennis and baseball earning district championships; or debate, theater and science fair competition recognition at state, district and national levels — there are many accomplishments that were made by students in the Class of 2017, Edgecomb said.

“Seniors, your stories are still being told. There will be more sayings, more conflicts and more characters that will add to your story,” he said. “As the author of your life story, what parts you play will be up to you. We are honored to have been part of your story… On behalf of the faculty and staff at Palm Beach Central High School, we wish you much success.”

He gave kudos to Edgecomb, then asked seniors to stand when he listed the various schools in Wellington that helped shape them as students. “Let’s hear it for the feeder pattern here at Palm Beach Central,” he said. “Thirteen years of education!”

Some of the most dramatic changes in technology, entertainment and pop culture have been experienced by the Class of 2017, Christiansen said.

“I hope this motivates you to truly believe that nothing is impossible. I’m proud of you, and I know your principal, your many teachers and family members are proud as well,” he said.

“Who would have thought that the kid who had his color card changed to red every day, who struggled in school with ADHD and anxiety, who couldn’t read at grade level until the age of 12, would be standing here today giving a speech to his graduating class,” Rodriguez said. “It’s easy to look at those at the top of their class and think that they’ve always been destined for greatness. Or to look at those who have achieved success and see it as unobtainable. We have a tendency to see ourselves as inadequate to others, and are discouraged by the magnitude of our dreams. But all great things have humble beginnings, and no great success story is without sacrifice and personal struggle.”

The past may define who the students are, he said. However, it does not determine who they can become.

“No past achievement guarantees future success, and no current lack of achievement prevents it,” Rodriguez said. “You do not need to be distinguished now to be successful in your future.”

He encouraged students to pursue and find their passion as they sculpt their futures.

Valedictorian Tarang Patel began by thanking all those who helped him on the path to achieving his dreams. The families they were given, and created, he said, helped students reach graduation day.

“Life led me in a promising direction, and four years ago, I came in through the doors to another family — high school, a family. Palm Beach Central High School, a community of individuals with a variety of interests that has empowered us with the will, this will to achieve our dreams and attract challenges so that we can learn together to overcome them,” Patel said. “We are a family that has lived through much and will continue to benefit from all that we have experienced and all that makes each of us unique.”

Though some doors may close, he said, others will open.

Patel is looking forward to the future, and said he would be honored to mention that the Class of 2017 will bring this world into a new era. “Thank you, to this family,” he said.

“But today, we look around at one another, being addressed as Broncos for the very last time, and can finally say, ‘We made it.’ We put forth 13 years of hard work in order to reach today, the final destination of this journey,” she said.

Mills noted that graduation was the last moment they’d all be together, but it was not the end of the story. “Class of 2017,” she said, “our journey is just beginning.”