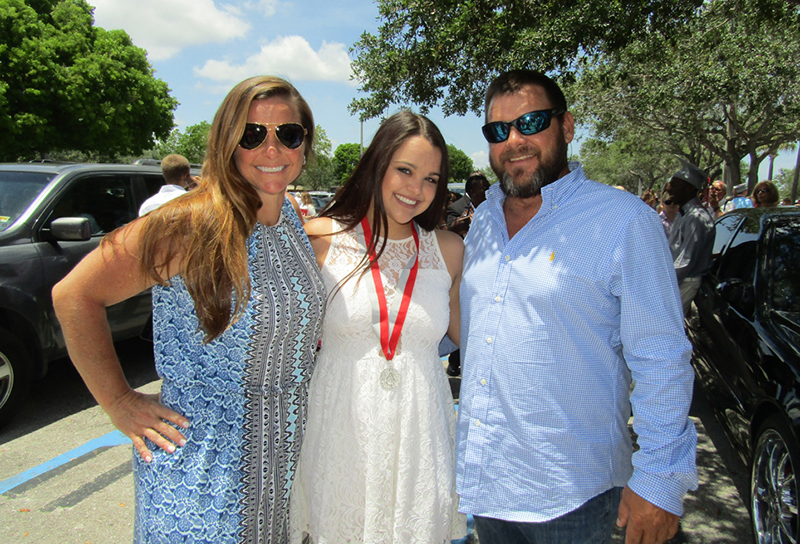 Avossa said that graduation from high school marks the beginning of the seniors’ lives as adults, noting that their path after graduation will not be simple.

“The reality is that many of you will have five or six different jobs over your lifetime, some of which have not even been created yet,” he said. “The Class of 2017 has experienced some of the most dramatic changes in technology, entertainment and pop culture. You’ve seen events that have changed our entire world. I hope that you will see that nothing is impossible after you walk across this stage. I’m proud of you, and I’m also proud of your principal. He also exemplifies the importance of continuing to learn. Let’s congratulate him on earning his doctorate degree.”

Machado, the senior class president, reflected on the accomplishments of the Class of 2017.

The Class of 2017 also raised money for the Children’s Miracle Network through the University of Florida’s Dance Marathon program.

“We are blessed to be a part of a phenomenal year three years ago and helped to raise $49,043 this year,” Machado said. “You can’t forget those who helped us make this mark, our parents and teachers.”

Machado told graduating seniors that their lives ahead will not be easy. “There are going to be obstacles, mistakes and roadblocks along the way, but we’ve made it this far, so keep up the good work,” she said. “Whether you’re going to college or straight into the work force, we’ll keep pushing because we know what we can achieve.”

Machado will be attending Palm Beach State College to pursue a career in nursing.

Salutatorian Alyssa Pace recalled that her high school journey did not begin at Seminole Ridge.

“I started my freshman year at Wellington High School,” she said. “I remember my very first day. I arrived early to try and find a few familiar faces, but there weren’t any. As the school year progressed, the unfamiliar faces remained unfamiliar… I grew to feel that this was what high school was supposed to be like.”

Eventually, she decided that Wellington High School was not the place for her.

“I officially registered for Seminole Ridge High School, and it was the best decision I’ve ever made,” Pace said. “From the moment I stepped on campus, I could feel the fullness of the atmosphere. It was an environment that promised both scholarship and camaraderie. I began to look forward to going to school every day. This was the high school I had been hoping for.”

Pace said that at Seminole Ridge, she has learned from some of the best educators she has ever had. “They have all expressed a genuine interest in our education, shared with us their valuable insights about the world and given us encouragement about the future,” she said.

Most of all, Pace said she appreciated the sense of community at Seminole Ridge.

“It didn’t take long for me to become fully immersed in Hawk culture,” she said. “It was an immediate sense of community and school spirit. It wasn’t as if the school operated independently from the student body. Everyone seemed to know each other, to be engaged, interacting with their teachers, playing sports, joining clubs, and both planning and attending school events. I was reunited with old friends and introduced to new ones.”

Although she and her classmates are moving on, she said the high school experience should be something they hold on to and appreciate.

“Cherish these final moments as high school students,” Pace said. “Remember the hallways, the classrooms, the desks you sat in, the conversations you shared with your friends in the cafeteria. All these familiarities are going to become memories. Today, we recognize the closing of an important chapter, but we celebrate the beginning of a new volume in the collection of the stories of our lives.”

Pace will attend the University of Florida to study biomedical engineering.

“For those of you who don’t know, the choir is a fantastic group of people with incredible discipline and work ethic,” she said. “I can’t tell you how much this program benefited me.”

She also thanked the theater department for keeping her happy and busy for four years and inspiring her to pursue a career in musical theater. Pelfrey also thanked her parents for their support.

Pelfrey plans to attend the University of West Florida to major in theater and history.

Campbell said that Seminole Ridge’s mission and vision is to engage all students in a superior education so they can achieve their highest potential.

“I think all mission statements have the same underlying theme — student growth,” he said. “Every school exists to be a part of and to facilitate your growth for the next days of your lives. That growth comes in many forms.”

Campbell spoke of several graduating seniors who turned their lives around during the course of high school to become leaders and scholars with promising futures.

“Stories like that are why we have the elementary and middle school principals joining us on stage today, so they can see and congratulate all of you on your growth,” he said. “At graduation, it’s easy to focus on the end of your high school career. Most of you would say that you’re happy that high school is ending and excited about what comes next, but many of you are quietly fearful about your future, and that’s OK, too. You don’t have to have everything figured out just yet. You just have to keep growing.”

ABOVE: Graduate Shelby Blakeney with Mary and David Blakeney.