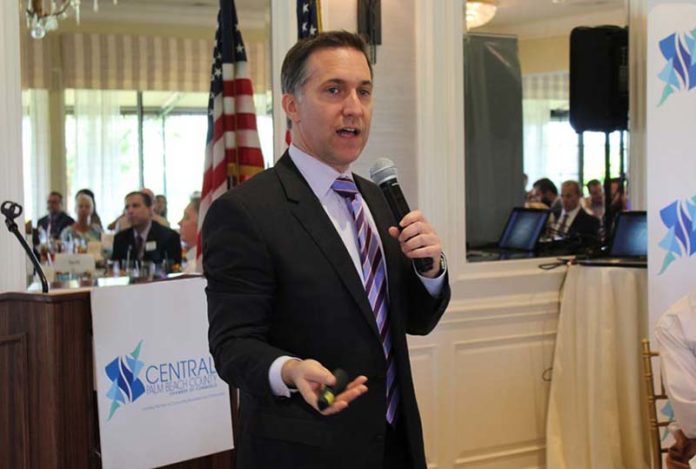 The focus of the luncheon was “the Economics of Addiction.” Aside from Aronberg, the luncheon featured the chamber’s Medical Board of Governors.

“We spent a lot of time deciding on what the best activities [were] for the Central Palm Beach County Chamber to be involved in. We have heard from all of you that these economic luncheons are very valuable, so we’re very excited that all of you are here today,” said Wellington Regional Medical

Center CEO Robbin Lee, vice chair of the chamber and a member of the Medical Board of Governors.

Aronberg brought to light how close to home and the workplace opioid abuse hits in the country, the state and, specifically, in Palm Beach County.

Aronberg said it is important for community leaders to come together to get a handle on this issue.

“A lot of people think… this is just another drug issue, where users are always going to use, and you can’t do anything about it except for maybe get more money for rehabilitation,” Aronberg said. “But it’s more than that. You need a law enforcement response, which we’ve done. But you also need laws to help us out.”

Aronberg said arrests can’t be the only solution to the problem of drug abuse in the state, but also the help and support of the state and federal governments.

“If one person dies, it’s a tragedy; if 2,700 people die, it’s a statistic. People get dehumanized based on raw numbers. You have to personalize it,” he said. “But government doesn’t do a great job of preventing and predicting and anticipating. It does a better job of reacting after a crisis has occurred.”

In his presentation, Aronberg showed a clip of a hidden camera brought to a pain clinic in Broward County showing that the only form of payment available to patients was cash. In the video, a narrator said there was, “only one course of treatment: drugs.”

This was a Broward clinic run by the infamous pill-mill kingpins Chris and Jeff George, who used their mother’s Wellington home to store millions of dollars in cash. Both men are now in federal prison for their crimes.

“Firefighters, paramedics and police officers will come to their aid. They will give them Narcan in their nose, or intravenous, and they will be brought back to life, oftentimes to overdose again that same day,” Aronberg said. “That’s how powerful addiction is.”

He said there are laws that have enabled the prescription drug crisis. These laws allow sober homes to be established and to stay in communities.

Because these residences are protected under federal law, it basically creates a loophole that allows them to persist, and it can take a great financial toll on municipalities. “So, a sober home moves in and puts nine people in the home, and then the village says: ‘You can’t do that. Your limit is three.’ And then, the sober homes’ lawyer sends a letter to the village saying, ‘We request under the [ADA] a reasonable accommodation,” Aronberg said. “And then, you pretty much have to grant it because they are protected under the ADA.”

In one instance, Aronberg said Boca Raton lost a case under a similar circumstance and had to pay $3 million when it lost the lawsuit filed against the municipality.

“I feel for local government. When people complain to village council members, to city council members, and say, ‘Why aren’t you doing something about this? There is a flophouse living next to us. There are eight people loitering around. There are all these cars in the driveway,’” he said. “You say, ‘Hey, they’re protected under the ADA,’ and they don’t want to believe you.”

Work is being done to try to get the ADA to differentiate between legitimate sober homes and those that are not, he said. For example, Aronberg said U.S. Rep. Lois Frankel (D-District 21) asked the federal government for clarifications toward the terms under the ADA that seem to allow flophouses to stay standing as sober homes. But so far, there has not been anything concrete to clear up the problem, except when there are enough clusters of sober homes in one area to where it is a hazard to the overall health of the community. Still, clarity on what number defines a cluster is unclear, Aronberg said.

“For instance, accidents caused by alcohol account for nearly half of the [emergency room] visits per year,” Gilbert said. “This affects both health and car insurance. With the high number of accidents each year, the cost of healthcare and insurance goes up for everyone. Eventually, what once seemed like someone else’s problem creeps into our own personal and professional budgets.”

She said the biggest impact that substance abuse in the community has is on the financial aspects from the county level to nationwide.

“The GDP for the United States last year was more than $18 trillion. The total cost attributed to excessive drinking, prescription opiate overdose, abuse and dependence was $302 billion. That’s more than 1.5 percent of our gross domestic product,” she said. “That’s hundreds of billions of dollars that we are paying if we choose to not help these people.”

Gilbert said that if community members work together, the trends that are being seen at all different levels within the county, the state and the country can be changed.

“We need long-term recovery if things are going to get better, specifically with heroin, where someone who recovers from it is at a high risk of dying if they relapse,” she said. “If we focus on getting people into recovery, whether that’s getting them into a 12-step program or a treatment facility, we can reverse every single one of the negative impacts.”

In partnership with Retreat, the chamber will conduct a workshop on Thursday, June 29 to recognize symptoms that employees or anyone might show if they are experiencing substance abuse.

Aronberg said that locally, the county needs more support from the federal government to continue to improve the measures necessary to bring consequences to flophouses that pose as legitimate sober homes. But the lack of support, he said, won’t prevent him and his Sober Homes Task Force from continuing to reach their goals.

“We are going to continue to put handcuffs on people who are taking advantage of individuals at the lowest stages of their lives,” Aronberg said.