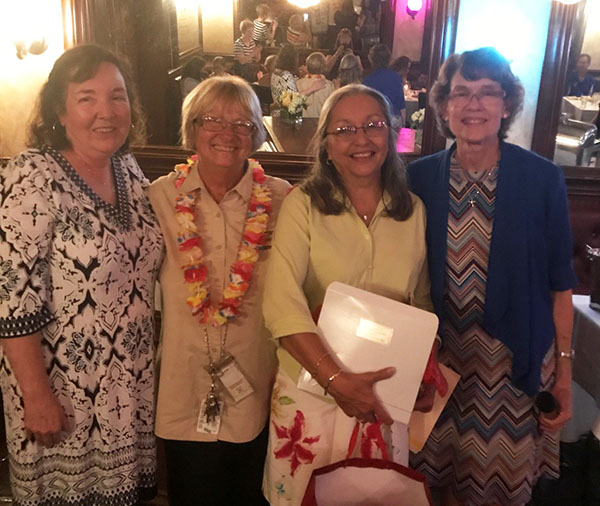 It’s the end of an era at New Horizons Elementary School in Wellington now that Mickey Simmel, the school’s longtime assistant principal, retired this month after 18 years as the school’s second in command.

“I came over from Crystal Lakes Elementary in 1999,” she said.

From 1984 to 1999, Simmel was a fifth-grade teacher. Prior to that, she worked filling in during the 1970s to cover when teachers were on leave at Plumosa Elementary School, her childhood elementary school.

In 1984, she started working consistently in the school system at Forest Park Elementary School, following the principal when Crystal Lakes opened.

“I was lucky enough to get to go and open up a new school, which is a great experience,” Simmel said.

After 16 years, Simmel transitioned to the role of assistant principal at New Horizons.

“I liked it. It’s something different all the time,” she said. “My motivation for going into administration was I had a vision of what I felt education could be like for the 21st century. So, I was very balance-driven and literacy-driven, very hands-on group sort of lessons. It was exciting. You were coming with all of the things you had learned as a teacher and going to a school that was well-established and had a great reputation.”

When she started at New Horizons, just about everyone was new, with different jobs than what they have now, she recalled.

“We were all beginners at what we were doing,” Simmel said.

The first year Simmel was at New Horizons, the school had a gifted center that would eventually move to Binks Forest Elementary School, then under construction.

Some of Simmel’s favorite things about being the assistant principal included the kids she met and the people she worked with.

“The kids, the teachers, the very nice staff — a very caring staff and a very hardworking staff,” she said. “I think kids are always wonderful to work with. It’s a challenge, and it’s enjoyable. They have good energy and they push that off on you.”

Simmel embraces change and enjoyed being exposed to different students and different philosophies. “I believe in change. I think change is good,” she said. “It was just enjoyable. It’s a nice, caring, pleasant place to work.”

New Horizons is family-driven, with parents and the PTA involved, she added, noting that the school is like a family.

There was a surprise retirement party. Simmel was caught off guard but pleased. She enjoyed working with Principal Betsy Cardozo and enjoys the friendships she created at the school.

Simmel lives in Hobe Sound, which is a testament to how much she cares for New Horizons.

When she started teaching, she lived in Delray Beach. She later moved to Hobe Sound and built a house.

“That probably says a lot for the school and people in it that I would commute and do that drive,” Simmel said. “That kind of says it all on the caliber of the people and the energy that you’re around.”

In her retirement, Simmel plans on spending time at the beach, volunteering with children and setting up a trip to Ireland, which has been a longtime dream of hers.

Some of Simmel’s fondest memories are with the kids whom she was able to make a difference with, the office staff she worked with over the years and the friendships she has made.

“Change is your friend,” “always put kids first” and “love what you do” are some of the words of wisdom Simmel, who has turned 70 years old, shared. “You need to love your job,” she said.

ABOVE: Mickey Simmel (second from left) at the retirement party.