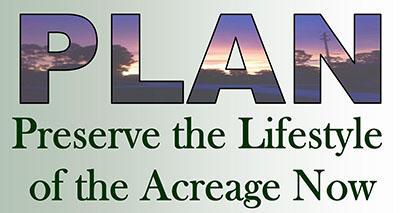 Preserve the Lifestyle of the Acreage Now (PLAN), a group initiating an effort to incorporate The Acreage, met again at the Acreage library on Tuesday, May 30, where members reviewed small changes in its feasibility study and proposed charter.

“We’ve been at this for about a year now,” said PLAN President Brett Taylor, who thanked the dozen or so people at the meeting for coming out the day after a holiday. “We really didn’t expect that great of a turnout, but we really want to maintain continuity, so we’ve been holding these meetings about once a month.”

Taylor said the purpose of incorporation is to have more control in preserving the rural lifestyle of The Acreage, which is beset by encroaching development.

“We have the freedom to pursue agricultural interests, livestock interests, equestrian interests,” he said. “We can operate our own small businesses right from our house, so there’s a lot of benefits of living somewhere like The Acreage.”

PLAN is at a point now where it has the material it needs to send to the state for consideration.

“We’ve had some communications with the state,” he said. “They don’t have any problems with our feasibility study, our charter and those documents necessary to be considered for incorporation. Tonight, what we’re going to do is go over some of the changes we made to our feasibility study and the municipal charter.”

Taylor explained that the feasibility study is a financial projection of what kinds of revenues are owed to a municipality. He explained that as an unincorporated entity, The Acreage is not eligible for revenue sharing available to municipalities.

“Our preliminary results show that The Acreage is entitled to roughly $15 million that we pay in taxes,” he said. “When you go and pay road and gas and sales taxes, all this money that you pay out doesn’t come back to our community. The only way we get it to come back to the community is through incorporation. That might not sound fair to you, but that’s just the way it is.”

The charter is an outline of the type of government The Acreage would have if approved in a public referendum. All the documents, including the feasibility study and proposed charter, are available on the PLAN web site at www.preservetheacreagenow.com.

The changes being reviewed on Tuesday, which were minor in nature, were based on communications they had with the state and from residents’ feedback at previous meetings, Taylor said.

PLAN member Bill Gotthelf, who was an Indian Trail Improvement District supervisor more than a decade ago when ITID started a process to incorporate The Acreage, said that many people believe that ITID is the government of The Acreage.

“Indian Trail, because it’s a special district, is not entitled to any of the sharing in revenue from the state,” Gotthelf said. “We’ve talked about gas tax and sales tax and all of the taxes that you pay when you go to the store. The county enacted a new one-cent sales tax. The county has a six-cent sales tax. The state has a 21-cent gas tax that’s on every gallon of fuel you buy.”

He explained that a portion of those taxes come back to the municipalities and the county, which doles out that money wherever the county chooses.

“The county has been collecting this money for our community because we’re unincorporated,” he said, explaining that ITID made an incorporation effort in 2002.

He believes that the previous effort failed due to misinformation that scared residents.

“I was on the board at Indian Trail,” Gotthelf said. “I was not reelected because people were afraid of taxes and everything else. So, when I got involved with PLAN, the biggest thing was I wanted to make sure that everybody’s mind was put at ease about taxes.”

Gotthelf said he took the feasibility study to the state’s Office of Finance and Budget in Tallahassee, where he talked to an official who is from Wellington and is familiar with the area.

“He made a couple of suggestions,” Gotthelf said. “He also said that our $15.5 million that we anticipated the new municipality would take in the first year in everything but property taxes — we’re not talking about any property taxes — he said it was conservative, and he looked at the state budget and said it would be closer to $19 million.”

Gotthelf said the professors at Florida Atlantic University who did the feasibility study were intentionally conservative with the $15.5 million revenue estimate, which more than covers the approximately $10 million estimated to run the fledgling municipality.

“We’re going to leave it at that, and we’ll live with those numbers, because there’s already a $5 million surplus,” he said.

One of the changes they made in the feasibility study was that there would be no property taxes for three years, and any property tax would not go up by more than 0.3 mills per year thereafter. It is likely that the municipality would be required by the state to levy an ad valorem tax after three years, although PLAN’s goal is to avoid property taxes.

“[The state] told us that we couldn’t do that because the state constitution and state laws said that you can’t restrict the government’s ability to raise taxes,” Gotthelf said.

“They actually granted the waiver for property taxes because there had been other municipalities that started out with no property taxes,” he said.

After advice from state officials, PLAN representatives changed the “no tax” clause from three to five years because there would be more than enough money coming in to also reduce ITID assessments.

They also asked for a variance in a requirement that the applicant for incorporation cannot be within two miles of any other municipality.

“We have Loxahatchee Groves, Royal Palm Beach, West Palm Beach, Palm Beach Gardens, Westlake — we’re within two miles of them, so we’re asking for a variance from that state law, and they granted the pass,” Gotthelf said.

Under the proposed charter, ITID would become a dependent district, possibility with ITID supervisors seeking seats on the new municipal council.