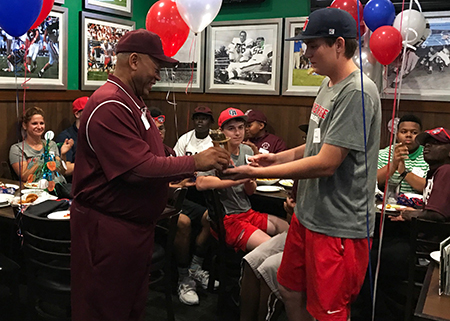 The Oxbridge Academy baseball team showed true sportsmanship when they took it upon themselves to raise a total of $7,000 for the Palm Beach Lakes High School baseball team for equipment, uniforms and umpire fees necessary to complete their season.

The initiative was led by Oxbridge sophomore Juan Salinas-Bentley of Wellington, a pitcher on the school’s varsity team, who started a fundraising program in 2013 named GAME (Giving Athletes More-of-an Edge) Day to help teams that needed financial help.

Salinas-Bentley dedicated his fundraising efforts for this year to the Palm Beach Lakes team after reading about the team’s needs and the coach’s plan to rebuild the baseball program. However, they desperately needed new uniforms and equipment. Salinas-Bentley got in touch with the coach George Powell, who had already begun fundraising for the 2017 season, but it wasn’t enough. Powell sent Salinas-Bentley a wish list, which totaled $3,300 to purchase new jerseys, pants, caps, bats, gloves, helmets, baseballs, scorecards, two sets of catcher’s gear, a first aid kit and field striping paint.

Salinas-Bentley was able to raise $2,700, which was matched by family friends, Mr. and Mrs. Beau Van Metre of Palm Beach, for a total of $5,400. A few weeks later, Powell reached out with news that the baseball team’s season would be cut short because the school budget did not have the money to pay for umpires for the remaining 11 home games. Salinas-Bentley and his Oxbridge baseball teammates rallied to raise an additional $1,600 to cover the umpire fees.

“The leadership shown on this project encompasses everything great about the culture of Oxbridge,” said Patrick Hollern, director of athletics at Oxbridge. “The compassion and dedication demonstrated by everyone involved is truly an inspiration.”

All monetary donations given to GAME Day are spent to purchase much-needed equipment, uniforms and gear.