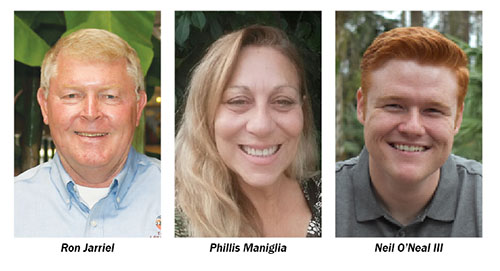 A three-way race has emerged for Seat 1 on Loxahatchee Groves Town Council, while the challenger for Seat 3 has won unopposed after the incumbent did not file for re-election.

Jarriel, the Seat 1 incumbent, said he is not intimidated by the challengers.

“I’ve got faithful people who have known me for years, and we have a lot of new people coming in,” he said. “Strategically, I believe I’m better off the more people who run.”

Jarriel will have served nine years on the council in March and was on the Loxahatchee Groves Water Control District Board of Supervisors for nine years prior to that. He will have been retired as a firefighter for 10 years in June.

“I’ve got a lot of experience, but my main advantage is I’ve lived in Loxahatchee Groves for 57 years,” he said, adding that his work as a firefighter and on the LGWCD board has given him expertise in roads and drainage, the two biggest issues facing the community. “Those have got to be the things we look at first.”

At the last two council meetings, Jarriel said he got council members to support using about $800,000 in the town’s share of revenue from the recently enacted 1-cent county surtax to dedicate for drainage basins in anticipation of future road paving.

“One problem that hurts our roads is bad drainage,” he said. “We can work on that now, and when it comes time that we get our bond, we can move on with paving it.”

Another thing he wants to move forward with is equestrian trails.

“Certain people don’t want those trails to come into existence, and I fought hard for the trails, and I’m hoping that we can move on with it and start getting some equestrian trails,” he said.

Jarriel is also concerned about bringing in more revenue for the town. “It’s got to be commercial off of Southern Blvd.,” he said. “Whatever we bring into this town has got to benefit the residents over the developers.”

He noted that the Groves Town Center development at B Road and Southern Blvd. will soon give a presentation on a proposed comp plan amendment to allow 96 homes as well as a Wawa, Chase Bank and an Aldi grocery store on its 90-acre property there, which has been approved for mixed commercial use.

“These homes would be $500,000 and greater, so what I’ll be looking at as a council member, since it’s off of Southern Blvd., is how much revenue it will bring in,” Jarriel said.

His focus, however, will be on existing residents. “I’ll be glad to listen to what they have, and mainly it will be how much is it going to benefit the residents and how much revenue it will bring in that we can make better roads and better drainage,” he said.

Jarriel added that he has requested emergency grading of badly deteriorated roads in the town. “They haven’t done it, and being a firefighter working with police officers, I’m very frustrated with the condition of our roads,” he said.

Maniglia has spent years recovering from a devastating traffic accident in 1991 and has lived on disability payments for a long time. She regularly attends council and committee meetings, as well as water control district meetings, and is an outspoken participant in town issues.

“I was hit by a drunk driver three years after I purchased my home. My life drastically changed. I’m very good at pinching a penny,” she said.

Maniglia got involved in local politics in 2013 when she was one of 20 residents cited by code enforcement for violations by a water control district supervisor who was working for town code enforcement at the time.

“I realized that the way they rule this town was fear,” she said. “A lot of our residents will not sign a petition. They will not come to the council. They don’t want to make waves because they are afraid of our board members and our council members. I feel that the code enforcement system is selective and definitely needs some updating.”

She said residents need to know immediately if they have a code enforcement complaint against them. “They should get it in the mail immediately, but that does not happen right now,” she said.

Maniglia said that there is a serious road problem in the town that the council has not addressed in years past, although there are council members and former water control district supervisors whose roads are paved.

Maniglia asserted that there is no future vision from sitting council members, only strategies to keep themselves in office.

“We need to stop these issues before they bloom into full-blown disasters,” she said. “We need to get rid of the career councilmen.”

She also has an issue with what she called hiring friends and neighbors to do town work.

“We have a bidding process,” Maniglia said. “I believe it should be a closed bidding process, and I feel that in some cases it’s been pretty obvious that some people get jobs because of who they know, and that needs to stop in our town.”

She is also frustrated that there has been no progress cleaning up portions of Southern Blvd. commercial where there is loitering.

O’Neal, 21, studied finance at the University of Central Florida. He said he is running because he wants to help the town.

“Obviously, we have financial problems because we can’t get an approved millage rate,” he said. “We need to look at all sources of income… anything to help the road problems right now, because they’re pretty bad.”

He expects that fixing the roads is going to take more money than the town currently has available.

“I know no one likes to hear that their taxes are going to be raised, or that they’re going to get a special assessment… but, unfortunately, that’s just the situation that the town is in right now,” O’Neal said.

O’Neal believes he can offer a fresh perspective to remedy the town’s problems. He has attended council and committee meetings regularly for the past six months and has offered comments on the issues at times.

“Each meeting is always different, but usually it’s about the same theme — roads,” he said. “There’s a couple of other issues that the town has worked through, but watching the council operate and back and forth with each other, I think that there is some animosity up there that some councilmen have for each other, and some have animosity toward town management. I think we need to work together in order to fix our problems. They’re only going to get worse if we fight with ourselves.”

He said he would support any proposals that will improve the roads and drainage.

He said one small step he will make is to not take any salary from the town if elected, adding that he has had several sit-down conversations with Town Manager Bill Underwood in order to better understand the state of the town.

“I think he is a very knowledgeable person, and I think he’s great at his job,” he said. “I think the only thing really holding him back is getting good, clear and concise direction. I don’t think we offer that to him. I think he is working with his hands tied behind his back a lot of times because of our financial troubles. There’s only so much that we can do with the money that we have.”

“I don’t believe that commercial is suitable for Okeechobee Blvd., especially in the state that it is now,” he said. “I know that there have been talks from the county that they are planning on four-laning it all the way through, but as far out as their budgeting is, we have time to go ahead and… protect ourselves from making Okeechobee a cut-through.”

Batcheler spent months gearing up for a campaign that never happened. She will be sworn in after the March 13 election. Once on the council, she is eager to help improve the bad road conditions.

“How we get to repairing the roads may vary between the candidates, but that’s obviously going to be the number-one priority,” she said.

She thinks a charter amendment is needed to allow the council to take out the necessary loans.

“I know it has been brought up before for a vote — but perhaps the council would be more willing to consider it now — is to change the charter that requires any type of borrowing to be put on a referendum, and only being able to borrow what the town could pay back in three years,” Batcheler said. “I feel we need to have a release on that, even if it’s in the way of an equity line or something similar to that, so when we get in an emergency situation, we have a resource that we can go and borrow money to take care of the emergency.”

She said the town was fortunate to have reserves to pay for the cleanup after Hurricane Irma, but it’s not clear how soon, if ever, it will get a refund from FEMA.

“I’m totally in support of what they are proposing to do now with the capital improvement funds… and taking care of some of the drainage issues… because if they don’t get the water gone, anything they put there is just going to wash away,” she said.

Batcheler is also interested in a development that is being proposed along the Southern Blvd. corridor.

“I know some people absolutely are so against any kind of development whatsoever, but the Southern Blvd. corridor has already been marked for commercial. I’ve tried to point out to residents that either you allow some other means to help pay for everything, or you take absolute responsibility, 100 percent, for coming up with the money you need. You can’t have it both ways,” she said.

Batcheler said commercial development would go a long way to relieve some of the financial burdens that the town faces. However, she does not favor development in the interior of the town, or subdividing the five-acre lots.

“I think that’s what the voters voted on and wanted when the town incorporated,” she said. “I would like to see those five-acre lots retained that way and not broken down.”