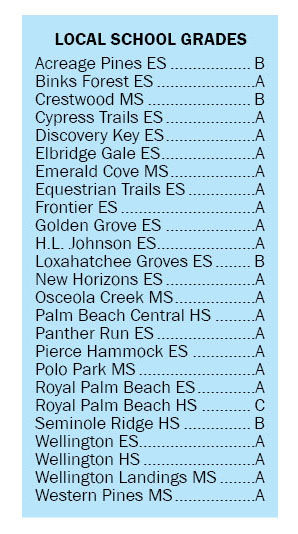 The School District of Palm Beach County is an A-rated district and has the highest number of district-operated “A” schools when compared with other large urban school districts.

According to preliminary school grades released Wednesday by the Florida Department of Education, the district ranks highest in Florida on total number of points earned when compared with other large urban districts.

The district also was highest among its peer districts in math achievement, science achievement, math learning gains for all students and the high school graduation rate.

“Our district’s A rating is due to the hard work and dedication of Palm Beach County’s teachers, staff and students,” Superintendent Dr. Donald E. Fennoy II said. “We also know that the support of our parents and community play a large role in our success, and we truly appreciate the involvement of our families and community partners in making us Florida’s highest performing large school district.”

Student performance on the Florida Standards Assessments (FSA) provides the foundation for state grades, based on a school grading system adopted by the Florida Board of Education. Districts and schools are rated “A” through “F” based on a percentage of points earned.