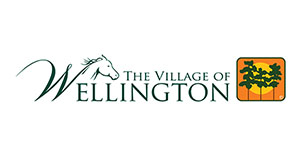 The single agenda item for Wellington’s Architectural Review Board on Wednesday, July 18 was the approval of an alternate design for a privacy wall to better screen part of the Palm Beach Polo & Country Club neighborhood from Pierson Road.

The homeowners’ association of Winding Oaks of Palm Beach Polo, a community of 18 single-family residences, sought a permit to install 203 linear feet of an eight-foot-high concrete block privacy wall with the goal of providing “an aesthetic look, privacy and security for the community.”

After being turned down because village requirements call for no higher than a six-foot wall, the HOA was told it could take the matter before the Architectural Review Board.

Winding Oaks is located within the southeastern portion of Palm Beach Polo, adjacent to the C-23 Canal and Pierson Road.

The board gave the nod for the extra two feet of wall amid discussion of “opening up a can of worms” because it would be the first HOA to receive approval for a variance for an eight-foot wall, despite other communities, along other more congested and equally noisy roads, having been permitted the standard six-foot walls.

Senior Planner Kelly Ferraiolo said that eight-foot walls have been approved in the past on a case-by-case basis for individual homeowners. She stated that staff recommended approval, “so homeowners can enjoy their property.”

“The approval of alternative development standards will be consistent with the general intent and purpose of these regulations and will not be injurious to the neighborhood or otherwise detrimental to the public welfare,” Ferraiolo’s report stated.

Staff also indicated that there is currently an existing eight-foot privacy wall located on the adjacent Winding Oaks Lane property that was constructed in 2005 without Architectural Review Board approval, having been missed by inspectors at the time. The new wall would continue that existing wall.

Additionally, the existing Winding Oaks barrier of ficus and Surinam cherry hedge, which is deteriorating, will be removed, and the wall will be installed in its place, matching and extending the wall of the adjacent property.

“The proposed wall will be in alignment with the existing wall, will be painted white and will also have a climbing bougainvillea along the south side facing the C-23 Canal/Pierson Road,” according to the staff report.

The bougainvillea will be required to match the condition of the existing wall, and must be maintained, Ferraiolo explained.

Marty Miller of M Squared Management, representing the HOA, showed a large swatch of the paint to be used on the wall which he said had a tiny bit of gray in it.

“The white is a little off,” he said. “I wanted to show it to you, so you know I’m not trying to sneak anything past you.”

Board Chair Ron Shamash said that the adjacent canal represented a special condition, allowing the exception. “If they keep it covered and nice, I don’t think it could be a precedent,” he said.

In other business, a last-minute item was added to the beginning of the agenda, as requested by Assistant Village Manager Jim Barnes earlier in the day.

He explained it was a technical measure to take advantage of a grant availability with a short closing time.

Barnes said that to be eligible for a 2018 Florida Recreational Development Assistance Program Grant, a project must have been discussed before a village committee, and staff must have been available to entertain any questions.

“We have nothing to lose applying for the grant, and since you were the next committee to meet, you drew the short straw,” Barnes said.

Barnes described one project that is on the drawing boards for fiscal year 2019-20 and two conceptual possibilities that would be farther in the future.

The planned project is a linear park in the Folkestone/Yarmouth area that involves closing a section of unused street to create a playground and basketball court. It is already funded in the budget. “If we receive the grant, we would recoup some of these dollars,” he said.

Other projects mentioned are being tentatively considered for installation in the area of Wellington Town Center. The first is a waterfront playground and the second is an additional splash pad facility for children that would be “new and improved.” Barnes asked for any questions, and there were none. No other action was required by the board.

Having met the requirements of the grant application by making the two-minute presentation, Barnes thanked the board members for their time.