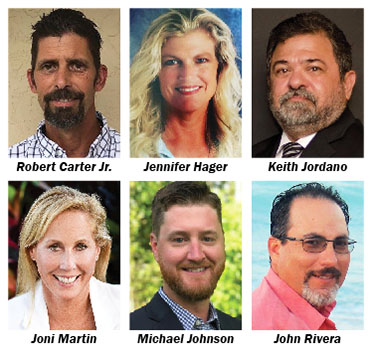 The Town-Crier asked a question this week to the six people running for three seats on the Indian Trail Improvement District Board of Supervisors. The election will be held Nov. 6. This week’s question: What changes would you like to see at the Indian Trail Improvement District, and what, in your opinion, should be ITID’s focus over the next four years?

Jennifer Hager — The Indian Trail Improvement District has made a great deal of very positive changes over the past several years. We have had renewed direction and focus. Everything is proceeding smoothly. The board has set the tone for staff to kick it into gear, and that’s exactly what has happened. I feel that we have key people solidly in place. They are working in a cohesive manner and doing a phenomenal job.

Over the next four years, I would like to see continued effort on drainage. We have been working at a steady pace with an aggressive plan, which includes the replacement of large culverts throughout the district, reclaiming canals and replacing road material. We have increased our focus on becoming self-reliant for additional water storage projects within the district, some of which include the 640 acres from GL Homes and the memorandum of agreement with the South Florida Water Management District for the drainage owed to us.

We will also be lobbying for additional grant funds to support equestrian trail improvements, as well as drainage and water storage projects — all the while, keeping a healthy balance of reserve funds. This may seem like a tall order, but we are determined to remain diligent in our goals to serve the public’s best interests.

Indian Trail has overcome many hurdles in the past. We have learned from mistakes and are working harder than ever to correct them and prevent them in the future. As a taxpaying resident, from the outside looking in, I see the work being done. I feel proud to call this district my home.

Robert Carter Jr. — There are many issues that need to be addressed within the Indian Trail Improvement District. With a few changes, one as simple as board members working together as a team and cooperating with residents, many issues that residents have been complaining about can be solved. The district has been mismanaging funds, which has resulted in spending with no improvements made. Residents need to be more involved and more informed about what is going on in their own community. The Acreage is growing more each year, and the way residents can be reached/informed needs to be changed. A better web site or newsletter needs to be established. Social media outlets is also a great way to keep in contact.

ITID has three main responsibilities: roads/roadways, canals and parks. The residents out here pay the county top dollar with no improvements to show. Certain canals and parks have been long overdue for maintenance and improvements. It should not take three times to do a road. There are many changes that need to be made in each area. Roads that need the most work have not been touched in a while, there are many issues of drainage such as culvert failures and plenty of equestrian trails that need fixing.

Over the next four years, ITID’s focus should be on actually improving the community, not stating one thing and then doing another. The residents are assessed each year, and each year property taxes have been going up. Where is the money going? This coming year, ITID plans on spending more of the residents’ hard-earned money on the R3 program, which covers paving of the long roads. ITID is a special district only and should not be taking the responsibility that the county should be covering. If ITID focuses on the important issues at hand and not cosmetic challenges, many useful changes could occur.

Joni Martin — I will bring a positive and fresh approach to the ITID board and will work toward accomplishing goals in a timely and cost-effective manner. The focus of ITID over the next four years should be our roads, canals, parks and infrastructure, and how they can best be upgraded to serve our residents and the current growth of our area.

I will also communicate with community members and educate new and old residents on what ITID is responsible for and how they can best voice their concerns to the board. I would like to promote more community participation and trust in ITID.

Maintenance on dirt roads, canals and swales is ongoing, and we need to make sure it’s done in a timely and efficient manner and consistently monitored.

ITID roads currently experience too much through-traffic and need to have alternate traffic-calming measures implemented for safety and optimum emergency response time. I will work with county commissioners and neighboring communities to focus on mitigating commercial traffic from our ITID-controlled roads. Repairs and upgrades to current roads and infrastructure are top priority, and I hope that our community park will see completion in the next six months. I will push for a moratorium on new projects until this long-overdue project is completed.

I hope I am able to earn your vote and serve you on the ITID board. Please see my page at www.facebook.com/electjonimartin or my web site at www.jonimartin.net.

Keith Jordano — As a longtime resident of the Acreage — close to 20 years — I would like to see more transparency, more professionalism and respect for other board members and the residents.

I have attended many meetings over those 20 years, and they can lack decorum and respect. The board could use a lesson in Roberts Rules of Order. The meetings would not drag out as long and more could get done.

Over the next four years, we need to get back to basics. First, maintenance of our canals and improving drainage. Second, improving and making our roads safer. Finally, our taxes are going up, but services seem to be going down.

I want the district to be more frugal with our tax dollars and get more bang for our bucks.

• We need to improve our overall level of service.

• We need to improve our grading schedule.

• We need to look at the cost of ITID mowing and possibly outsourcing mowing.

• We need to improve mowing schedules.

• We need to improve park maintenance and re-establish equestrian trails.

• We need to improve or create worker training programs.

• We need to improve the quality of work and work ethics.

• We need to work with Palm Beach County and the Florida Department of Transportation to find the most effective traffic-calming devices, without impeding rescue, equestrian or agriculture vehicles.

In my opinion, in the next four years, I would like us to focus on infrastructure and find better road material to repair dirt roads. I would like to see a plan to clean and repair our swales and canals. I would also like to look for additional grants and community partnerships for parks, and review the overall budget to minimize wasteful spending.

Michael Johnson — The question is “what changes would I like to see?” I would like to rephrase the question to “what changes would I not like to see?” I would not like to see the negative impact of urbanization from surrounding areas on the residents of The Acreage, including traffic issues and crime issues. Indian Trail is a voice for the people of The Acreage. One of the first areas that I believe Indian Trail should focus on is working with state and federal government programs to make sure the interest of the people of The Acreage is represented in the public policy making process.

We need to work with all the new developments on Seminole Pratt and Northlake in order to improve the traffic plan. We all see the gridlock, standstill traffic that is relatively new to our community, and we do not need Westlake and other new developments to channel their traffic through The Acreage without implementing a better plan. To ensure that, we can apply for state and federal grants to improve transportation infrastructure and safety measures. Additionally, we should further coordinate with the PBSO on law enforcement issues and how we can work together to further prevent crime that is, unfortunately, becoming a problem.

Indian Trail needs someone who is not self-serving. We need someone who is a forward-thinker and will bring common sense to the ITID table. We have enough self-serving individuals in government; let us keep that out of our local ITID!