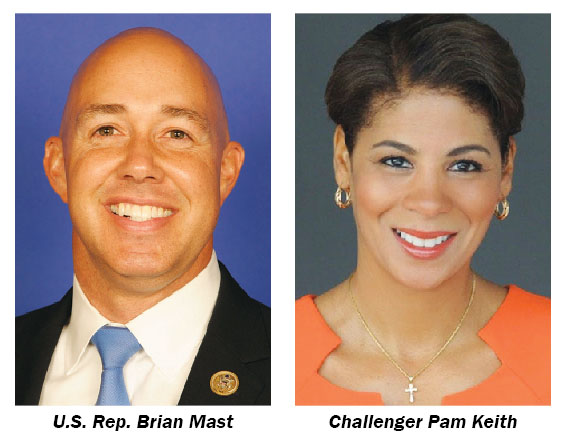 District 18 covers northern Palm Beach County and the Treasure Coast. In the western communities, it includes parts of Royal Palm Beach and most of The Acreage. It tends to elect Republicans, but not by a wide margin, and is considered somewhat of a swing district.

Mast, a U.S. Army veteran who lost both of his legs serving in Afghanistan, was elected in 2016 and is currently seeking his third term. He won his second term in 2018 with a bit more than 54 percent of the vote.

A U.S. Navy veteran, Keith is an attorney who has run twice before. However, this is her first time securing the Democratic Party’s nomination. She previously ran for U.S. Senate in 2016 and for the District 18 seat in 2018.

Monday’s debate, moderated by WPTV’s Michael Williams, was supposed to allow voters to determine who should represent the district in the U.S. House of Representatives but focused more on each candidate’s disdain for the other. The only thing that the two seemed to agree upon was the unworthiness of their opponent.

“The biggest thing about being a representative is not being on the TV or being in debates,” Mast said. “The biggest thing is the way a representative fights for the people of their community. People are coming into their office every single day. Hands-down, that is probably 90 percent of the work we have to do. The 20,000 people that we have helped during the coronavirus [pandemic] on a host of different situations — if you let me be your representative, I will do it the way I did in combat, and I will look at people as people and not as a commodity as [Keith] does.”

Keith accused Mast of dishonesty on a number of fronts, including the pandemic.

“You may not agree with my policies, but I will absolutely tell you the truth,” she promised. “Elections are functionally job interviews. We are asking you to hire us as your representative, and Brian committed a fire-able offense, and that is he absolutely knew about [the dangers of] coronavirus and chose to keep quiet, and now the country is hurting like it has never hurt before.”

When asked why she is the right choice for the job, Keith replied that she has better judgment than her opponent, again noting that he had briefings on the virus in February and said nothing to warn the community of its danger.

Next, the candidates answered about their stance on stimulus spending by blasting the record of their opponent. Mast said he was against it only on the third vote and that was because of unrelated measures that were attached to the bill. Keith thinks the stimulus should have paid more to ordinary Americans. “Millions of people are going to be out of work. They need more money than just enough to put food on the table,” she said.

Mast said he was proud of his record of working across the aisle, while Keith was more taciturn. “I think the problem is when it comes to fighting for the people, Democrats start too close to the Republican position,” she said.

Regarding another stimulus package, Keith was against what she had seen because, “It was just the bare minimum, and we were going to have to come back to the table later.”

Mast was against it because, “There are hundreds of billions of dollars left unused [from the first package].”

When it comes to the Affordable Care Act, Keith is for expanding it to cover more Americans, citing other western nations with healthcare coverage for all and explaining that not having such a plan costs more in the long run. “I think America should be providing healthcare as a fundamental right,” Keith said. “Businesses can’t grow because they have to factor in healthcare.”

Mast said it should be up to Americans to decide based on “choice and cost.” People who don’t want to buy the insurance because it’s expensive should not have to get it, he said.

Keith disagreed. “I think it’s very simple,” she said. “The coronavirus pandemic has made obvious the folly of tying health insurance to employment — 30 or 40 million Americans have lost their jobs.”

“I think people love the private insurance more than they love no insurance,” Keith replied.

Mast said that a universal plan is unfair to the people on Medicare who have been paying in all along. “The rest of the world has healthcare for their citizens and where do they want to come? To our system,” he said, adding that America’s for-profit system provides innovation and treatment that would not exist under a Medicare for All system.

The two also sparred on water quality issues, which has been a focus for Mast while he has been in office.

“The federal government should take land south of Lake Okeechobee by eminent domain, and I mentioned that because I think it’s my duty to inform people and tell them the truth,” Keith said. “Eminent domain is always a possibility. It is a last-ditch effort when you can’t get any place with good faith bargaining.”

Mast relied on his record. “When it comes to water quality, I consider it my biggest accomplishment,” he said. “I wrote the bill in Congress.”

Solving water quality issues through eminent domain has been talked about for more than a decade, said Williams, the moderator.

“Eminent domain would probably be pushing that reservoir back 10 years because of the lawsuits and the additional money. You would have to authorize it at the state and federal level, and then go back and pass it again,” Mast said.

Keith said she would put her focus on the Everglades as a freshman congresswoman.

“Our problem is that our Everglades are dying,” she said. “We believe in environmental stewardship and in science.”

Mast said that he would keep his focus over the next two years on the same issues he has made a name for himself on. “The environment and veterans are what I spend my time in Congress doing,” he said.

Next, the debate turned to statements each have made that are featured in the others’ advertising, including several improper social media posts from a decade ago that have gotten Mast in some hot water.

Mast is quoted as telling a friend who was traveling that he hoped, “He woke up in a bed full of 15-year-olds, as it’s legal over there.” He also quoted a line of a man telling someone, “Don’t make this rape a murder.”

Mast apologized for the remarks, which he said were improper but meant in jest. “I would like to be thought of as the sum of everything I’ve done after that with the military and my family and my work,” he said.

When it came to saying sorry, Keith demurred. “I do not apologize. There’s a sea of difference between what I said and what he said,” she said.

Keith said that her ad is fair.

“I absolutely think it is a fair ad that I have been running. I didn’t alter a single thing he said. It’s the thought that’s the problem,” she concluded.

“I think it cheapens the apology that you offered by making excuses,” said Mast, who added, “I was just ripping on my friends.”

Keith, who is of African descent, said that racial equality and COVID-19 are the crucial issues this election. “I think we could argue they are two of the greatest issues,” she said.

Mast put his focus on making sure that the central current issue is addressed.

“Maybe we can talk specifically about police reform,” Mast said. “I think we have to declare that no police officer will ever punish someone they are detaining. I hate racism. There is no place for it.”

Williams asked how they would move forward working with people with different points of view.

“I have worked with Republicans my whole career,” Keith said. “I work on moving forward the conversation in a positive way, telling people the truth. I’m trying to find common ground.”

Mast said he reaches across the aisle frequently.

“I do it on a daily basis,” he said. “I am ranked as one of the most bipartisan members of Congress.”

To learn more about Mast, visit www.mastforcongress.com. Find out more about Keith at www.pamkeithfl.com.