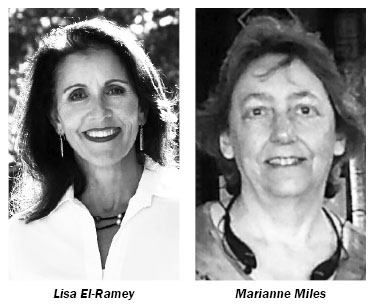 Roads, public works and commercial development are the key issues as incumbent Lisa El-Ramey and challenger Marianne Miles square off for Seat 3 on the Loxahatchee Groves Town Council in the Tuesday, March 9 election.

“We incorporated in 2006 so that we could have our own rules,” said Miles, a New York State native who has lived in Loxahatchee Groves since 1990. “Certain things have been neglected a long time. We’re still stuck in the mud, literally and metaphorically. We’ve been spinning our wheels for years, and that’s why I’m running.”

Miles noted that the narrow roads that often run beside canals are so poorly maintained that they pose a safety hazard not only for drivers but also for law enforcement and fire-rescue vehicles trying to respond to emergencies. She said that she favors paving all of the “letter roads.”

“There are too many fatalities in our roads,” Miles said. “We need to make a plan, set a schedule and get moving on it. It’s time for paving.”

El-Ramey, a Florida native and a professional in the equestrian industry, was elected in 2019 to fill a vacancy. She is currently serving as the community’s mayor, a post that is appointed from among the council members.

“My position hasn’t changed,” she said. “I believe we need to maintain the rural character of our community, which I would define as narrow roads, limited commercial traffic and bigger tracts of land.”

She is not opposed to paving some of the roads.

“Paved roads in some instances are fine, but there will always need to be speed bumps… [and] the money needed to pay for them would cause taxes to go up tremendously,” said El-Ramey, who is currently seeking a full three-year term. “We’ve seen a big influx of people from Wellington due to affordability and a more natural setting. A lot more equestrians are staying or wanting to stay year-round. We need to make sure that our community remains [financially] accessible to the average horse owner.”

In fact, there needs to be more and better access to riding trails, which already are being squeezed to the off-road side of many canals, which property owners often are reluctant to allow, said El-Ramey, adding that paving roads would further limit the options for horse owners.

Still, El-Ramey said she is well-aware of the maintenance issues involving many of the town’s roads. “Public works has not been able to keep up with what I consider essential services,” she said in January. “As far as long-term plans for the roads, I think we’ve got some things in the works that will give us a much better idea of the cost and the ongoing maintenance cost of those issues.”

Town leaders need a broader view of the community’s makeup and future, Miles said. “There certainly are a number of horse people moving in for whatever reason,” she said. “But we also have a lot of retired people here, too. And generational people. The town needs to benefit everyone.”

Allowing some commercial development would benefit average working people who live in Loxahatchee Groves and retirees on fixed incomes by shifting some of the tax burden for road paving and other essential services to businesses that want to operate in the town, Miles said.

“We have to have some development come in,” she said. “But it needs to be strictly controlled by the town.”

El-Ramey said she believes residents “are looking to us to maintain the original vision for the community. They want to be able to get out on their horses, go for bike rides, plant a vegetable patch for food or have a [golf] driving range in their back yard.”

Still, there must be reasonable limits on residential property use and any commercial expansion, said El-Ramey, listing getting code enforcement “back up and running” as one of her goals if re-elected.

“We’re starting to move a little prematurely regarding zoning changes, when we are still really not being effective at controlling some of the nonconforming uses going on around town,” she told the Town-Crier last month for a story on the 2021 council races.

Other front-burner issues for El-Ramey would be:

• To keep “the momentum,” as she described it, that has been built for positive improvements in the community and the town administration over the past three years.

• To push for better maintenance of existing roads and to get designs for affordable road improvements.

• Broaden the scope of the town’s drainage plan. “We don’t want to be in trouble with all of the water going into the C-51 Canal,” El-Ramey said. “We need to keep water at the [north] end of town and protect the aquifer.”

• Encourage the town to work more closely on traffic enforcement with the Palm Beach County Sheriff’s Office, which provides law enforcement services in the area.

• Expand access and availability to recreational trails without creating an extensive and expensive bridle trail system, such as the one in Wellington.

If elected, Miles said her goals would include:

• A “serious overhaul” of the budget. “Some tough stuff needs to be done… and things need to budget the right way,” she said. “We need to look at everything in the budget and see what can be cut.”

• Oppose funding for a recreational trail along Okeechobee Blvd.

• Create better communication between council members and the public, beyond already existing workshops focused on various issues. She proposes the use of town-generated mailings to poll residents on major issues. Council members are “not hearing what all of the residents want because they’re not asking them,” she said earlier this year.