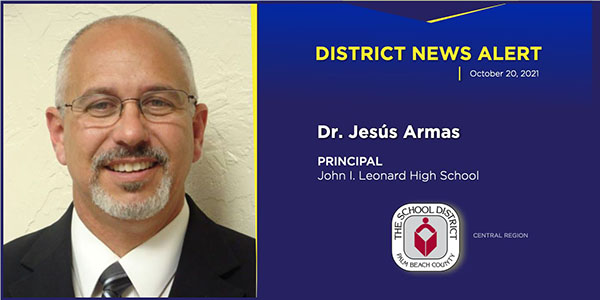 The School District of Palm Beach County announced Wednesday, Oct. 20 that Dr. Jesús Armas, principal at Royal Palm Beach High School since 2010, would be transferred to John I. Leonard High School to serve as the new principal at the Greenacres school.

At 11 years, Armas is the longest-serving RPBHS principal by far. Due to his successes at the school, Armas was named the 2020 Principal of the Year for the School District of Palm Beach County.

At John I. Leonard, Armas replaces Melissa Patterson, who was recently named the district’s director of multicultural education and migrant education programs.

Armas lives in Loxahatchee with his wife Teresa and their son Daniel, a 2021 Royal Palm Beach High School graduate.

The son of Cuban political refugees and a native of Belle Glade, Armas graduated in 1986 from the University of Miami. He earned a bachelor’s degree with a major in chemistry and a minor in biology. In the early part of his career, he taught science classes while also coaching basketball.

In 1999, Armas headed to Jupiter High School, where he became the school’s athletic director. During this time, he also attended Nova Southeastern University, earning his master’s degree in science education and receiving his certification in school leadership. He later returned to Nova Southeastern and earned his doctorate in educational leadership in 2017.

His first principal posting was in 2006 at Lake Worth Middle School. After dramatically improving the school’s rating, creating two choice academies and overseeing a campus expansion, he headed to the top job at Royal Palm Beach High School in 2010.

Armas took over a school considered by many to be in disarray, led by a revolving door of short-term principals. He put a strong focus on rigorous academic programs, including bringing the International Baccalaureate to the school, and redefining the school culture.

Royal Palm Beach’s test scores and graduation rate have significantly improved. Key to village officials, many students are no longer opting to leave Royal Palm Beach for their high school years as the school’s image has improved.

Given the outsized role Armas has had at the school and in the community, he will be difficult to replace at RPBHS.

On Monday, Oct. 25, there will be a community focus group meeting with school district personnel to provide input for the new RPBHS principal search process. The meeting will take place from 5:30 to 6:30 p.m. in the RPBHS Media Center. Interested parties can also join the meeting virtually by calling (240) 560-2935 and using the PIN 151 179 294#.

Interested parties are also invited to fill out a survey to give input into the principal selection process. The survey can be found at https://lp.constantcontactpages.com/sv/bpeWW2g.