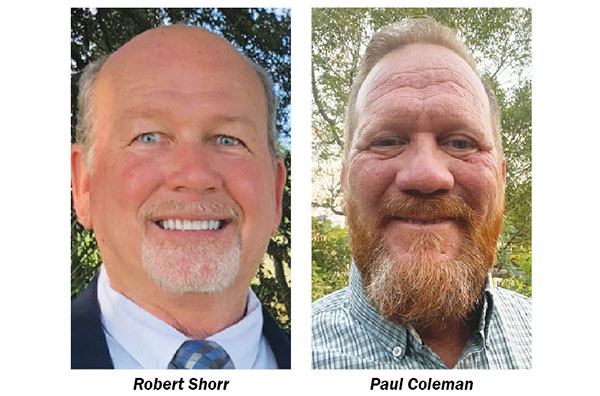 It is one of two races on the Tuesday, March 8 municipal ballot, with the other being the Seat 2 race between incumbent Vice Mayor Laura Danowski and former Councilman Todd McLendon. The winners will get three-year terms on the council.

Coleman’s goal if elected is to have a more global view of the infrastructure of the town — not just paving roads but having a broader vision so the town can move forward in a more sustainable manner. “By global, I mean talking about drainage, water quality, trash in the canals and cleaning the canals,” he said. “These canals haven’t been dug in decades.”

Coleman wants to move forward with a plan that encompasses trails, canals and roads.

“That’s not just throwing some asphalt on the road, and make sure those roads are going to last well past what the warranty is,” he said, explaining that the town has a three-year warranty on the surface of roads that were paved recently, or in the plan to be paved. “It doesn’t cover any of the rest of the road.”

His vision for the town is for it to be more sustainable and utilize whatever extra funding that can be found and build up relationships with neighboring communities.

“We can do things through ILAs [interlocal agreements] between the county, Royal Palm Beach, Indian Trail and Wellington, and work together as the western communities and sustain our way of life,” Coleman said. “I think working with neighboring communities can help shore up our borders as well. It’s not just about getting things done within our community but securing our way of life and the way we do things by solidifying our borders and making sure everybody’s on the same page. I think it’s imperative that we work with neighboring communities to make this happen. The drainage and infrastructure are all part of this global vision.”

He noted that drainage and infrastructure have been neglected in Loxahatchee Groves for decades.

“The powers that be neglected roads for decades,” Coleman said. “I hate to go back to paving roads because that’s not the only problem. Just paving to pave without any thought to infrastructure is an issue.”

He said the current paving policy of putting in catch basins where they are available is a shortcoming of the plan, while paving the whole length of the road is not taken into account.

“Each individual catch basin is put in in its own merit, whereas if we designed a road with the infrastructure in place, we could do it all at once,” Coleman said. “It might cost a little bit more money, but if you put the roof on before you do the foundation underneath, it’s going to cost you more money. We’re going to have to go back and repave where we didn’t put in catch basins.”

He added that the cost of putting in road rock before paving has not been publicized, thereby reducing the apparent cost of the project. “The reality is it’s not costing $200,000 a mile because we had already put down the subsurface,” he said.

Coleman has been a building inspector for Palm Beach County for the past five years and in facilities management for three years before that.

“I deal with everything from detached structures and fences to multimillion-dollar commercial buildings,” he said. “We ensure that the contractors are following the Florida Building Code. Part of the thing that we deal with, especially with the change in the FEMA maps, is property drainage and ensuring that when you build on a piece of property, you’re not letting your stormwater drain off onto your neighbor’s property. I’ve learned a bunch about drainage, flood plains and things like that.”

Coleman added that there is a lot of conflict resolution involved with his job. “I’ve been able to see at the ground level how some of these governmental processes work, the way things run, and the way things are done,” he said. “I think that would be beneficial if I get elected.”

Married to wife Kristi for 23 years, they have a 15-year-old daughter, Keelin. He has lived in the same house in Loxahatchee Groves since he was two years old, having moved there in 1976.

Coleman’s father, Tim, who passed away several years ago, served on the Loxahatchee Groves Water Control District Board of Supervisors, which is now the town’s public works department.

Wrapping up his first three-year term on the council, Shorr, 57, wants to complete the four-year paving process now underway, approved by the council in November 2021.

“We’ll replace failing culverts, install more swales and catch basins for road drainage, and we will lower the taxes for homesteaded residents by shifting the tax burden to the existing commercial properties,” Shorr said. “We already started doing that in a recent addendum to the hauler. We increased the franchise fee that commercials pay for garbage, and that money now goes into the budget as a supplement to the fee that is paid for residential waste, so we’ll be able to lower the garbage assessment for residents.”

Shorr said he will continue to look for ways to lower taxes for residents. “My biggest goals are to complete paving, keep improving drainage and lowering taxes,” he said.

“In two years, after the paving is done, and we’ve replaced these culverts, we will be at the point where we can plan our maintenance for the rest of the infrastructure — the canals, the canal banks, the guard rails,” Shorr said.

Among other goals he has are to retain a rural lifestyle, keep zoning at one residence per five acres and keep Okeechobee Blvd. a rural, two-lane road.

During his term in office, Shorr has been central in initiating many town events. “I will continue to do the community events that we started since I took office,” he said.

These events include a Fourth of July parade, Veterans Day parades, veteran ceremonies, several town cleanups, a council chili cookoff, coffee with the mayor, coffee with the sheriff, holiday food baskets and an equestrian scholarship poker run. Shorr noted that he has donated a lot of money into these events. Another accomplishment he listed is the dedication of the Ron Jarriel Memorial Trail on Okeechobee Blvd. from E Road to D Road.

“It’s along the south side of the canal on town property, it’s not on county right of way, so this trail will be there forever, no matter what happens to Okeechobee [Blvd.],” he said. “That was a huge effort of volunteers and financial commitment to help fence that trail off and clean it out and mow it.”

Shorr pointed out that town trails are multipurpose. “Every trail in town is for hikers, bikers and horses,” he said. “They are for people to walk on, ride bicycles on non-motorized.”

Among other accomplishments of the council during his time in office are opening town hall five days a week and initiating all permitting and inspections through town hall rather than a process through the county.

“It’s going to be an efficient process that is going to benefit everybody in the town,” he said.

Shorr added that the town has paid off all of its debt, and all the tax rates have remained the same over the past three years.

“We have built up a reserve of almost a million dollars,” he said. “We have spent our money efficiently in getting things done and not by consultants.”

He said he is proud of his military service as a U.S. Navy nuclear plant supervisor on a cruiser out of San Diego, where he was awarded Navy Achievement and Good Conduct medals.

Shorr was born in Lake Worth General Hospital, grew up in Greenacres, attended John I. Leonard High School and graduated from Palm Beach State College. His profession is to provide certified state reports for commercial air-conditioning systems.

Shorr is married to his wife Francine. They have two children and four grandchildren. His daughter is a teacher in Palm Beach County, and his son is in the same line of work as he is, having started his own company.