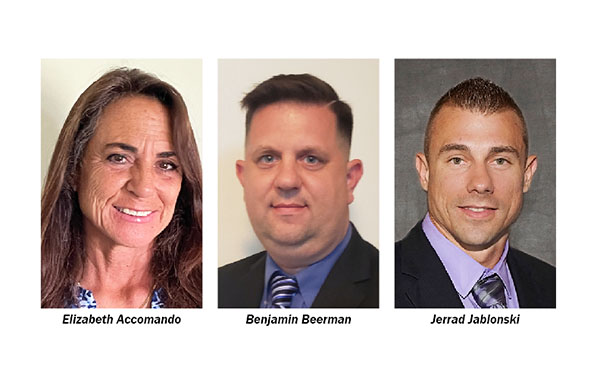 This issue, we are focusing on the candidates for ITID Seat 1. They are looking to replace incumbent Supervisor Jennifer Hager, who is not seeking re-election after 12 years on the board.

The responses of the three Seat 1 candidates — Elizabeth Accomando, who lives on Carol Street in Santa Rosa Groves; Orange Blvd. resident Benjamin Beerman; and Jerrad Jablonski of 61st Place North — are presented here. This is the first attempt at public office for all three candidates.

Background: Accomando moved from Long Island, New York, to Florida in 1991 and into the Indian Trail area in 2013. With a background as an insurance adjuster and business owner, she is founder and secretary/treasurer of Barky Pines Animal Rescue & Sanctuary. She was a prime supporter of the push to activate her rural neighborhood of Santa Rosa Groves into the district and was a member of the ITID’s Feasibility and Charter Review Committee. She is married with no children.

Why did you get into the race? Being part of the Santa Rosa Groves activation effort and the charter committee, “gave me good insight into the process and how the district works,” Accomando said. “I’m passionate about preserving the community the way it is… Growth is inevitable, but it needs to be slowed down. I have the heart and fortitude to see it through.”

What would be your top three priorities? Number one, she said, “is protecting our roads. That’s critical… The growth [in traffic] is not coming from inside the community. Our roads are being used at cut-throughs.”

Number two, she said, “would be drainage. We need to have a good, functioning infrastructure… Protocols need to be put into place” to make sure the swales are clear, and the canals are not impeded.

Number three, she said, would be “keep our parks safe for the kids. We need more security at the parks… and improved maintenance. It’s important that the parks are functioning properly.”

Should the Acreage Athletic League enjoy a near monopoly on youth sports in ITID? “I have no skin in the game,” Accomando said. “But it needs to be all about the kids… There’s nothing wrong with competition [among leagues] as long as it keeps kids playing in the district… The district should not be involved in running any sports or events… or even mediating these sorts of issues.”

Do you favor Palm Beach County’s plan to five-lane Coconut Blvd. from 60th Street North to Northlake? “I would not be for five-laning it,” Accomando said. “It will funnel too much traffic through a residential neighborhood. There’s something like 400 ingresses and egresses along that stretch of Coconut. It wouldn’t be safe.” She added that State Road 7 from 60th Street to Northlake “definitely should be finished” before there is any consideration of expanding Coconut.

What can be done to deal with the long-delayed completion of the Corbett levee? “Our homes are everything. They have to be protected,” she said reflecting on the high water that swamped much of the district during Hurricane Isaac in 2012. Without the proper infrastructure, “it’s bound to happen again.”

Are you for or against incorporation? While some saw the FCR Committee’s work as an unsuccessful effort to push incorporation, Accomando said it really was an effort to let the residents of the area decide, and that she thinks that still is what should happen. “Give us the right to vote. Let our community decide our future… I’m for self-governance, for home rule, for keeping our community the way it is… [But] the district is not sustainable as it is. In five to 10 years, we’ll be our own city, or we’ll be part of another city.”

In closing… Accomando said, “I came from Broward. I saw what happened there… I have no agenda other than keeping the community the way it is for as long as possible… I have a vested interest in doing that [because] I plan to die here.”

Background: Beerman is a Maryland native who moved to the ITID area seven years ago with wife Melanie. They have two children. Beerman has a background in property management for public and private facilities of all sizes.

Why did you get into the race? He said he wants to bring greater transparency to the activities of the board and the overall management of the district. He believes his background dealing with intricacies of public and private property management, including their finances, would be an asset. “I’ve handled a number of challenging, difficult tasks and with success,” Beerman said.

What would be your top three priorities? Number one, he said, would be representing the wishes of the people of the district.

Number two, he said would be making sure that the district maintains a safe and functional roads and drainage infrastructure. “There are a number of projects in the works,” Beerman noted. “We’ll have to see which ones are the most important.”

Number three, he said, is proper maintenance of the district’s parks.

Should the Acreage Athletic League enjoy a near monopoly on youth sports in ITID? “The parks are important to district residents. They need to be maintained to a level that the residents can enjoy… Looking at how they are being used is something that could be looked at in the future… [But] as long as a group goes through the district’s process to obtain an SPA [service provider agreement], fills out all the forms, has all the proper insurance and so on, I don’t feel one group should be favored over another.”

Do you favor Palm Beach County’s plan to five-lane Coconut Blvd. from 60th Street North to Northlake? Beerman said it appears that the county is looking to use Coconut as an alternative to pushing State Road 7 through to Northlake Blvd. “It’s probably not something I’d support… putting a five-lane in a residential area,” he said. “Not until all efforts on State Road 7 are exhausted. I want to see the State Road 7 extension brought though to Northlake.”

What can be done to deal with the long-delayed completion of the Corbett levee? Beerman noted that the project has been a “work in progress” for a while but is primarily the responsibility of the South Florida Water Management District. “One of my goals is to maintain our relationships and keep communication open between [ITID and the SFWMD]. It’s important to our residents.”

Are you for or against incorporation? “After having all of the facts presented to them, I think it is best left to the majority of residents to decide,” Beerman said. “I’ll support what the people want. My job is to represent them and not my personal views.”

In closing… Beerman said he would bring greater transparency to the office and to the board and serve with honesty, integrity and an open-door policy. While ITID faces challenges, he said he believes many of them can be overcome by building “relationships and rapport” other governmental entities. “I want to keep and maintain the feel [the community] has had for a number of years,” he said.

Background: Since 2015, Jablonski and his wife Ashley have owned Jabrewski’s Pizza Company in the Acreage Shopping Center on Seminole Pratt Whitney Road. He also is the owner of a valet parking company and of a parking code enforcement business. Jablonski was born in Palm Beach County. His family moved to The Acreage in 1990. He graduated from Royal Palm Beach High School before attending what was then Palm Beach Community College. He and his wife have an 11-year-old son.

Why did you get into the race? “I’ve wanted to be more a part of the community,” Jablonski said. “From going to some [board] meetings, I believe there are things I can do to improve the community.”

If elected, what would be your top three priorities? Number one, he said, is build better parks, maintain them better and offer more diverse sports for residents to enjoy.

Number two, he said, would be to push back against expansion of roads to suit the needs of non-residents.

Number three, he said, is to support more community events such as green markets.

Should the Acreage Athletic League enjoy a near monopoly on youth sports in ITID? “I have no issue with the [AAL],” said Jablonski, whose son plays AAL football. “On the other hand, I don’t necessarily think one league should run all the sports. People should have the choice.”

Do you favor Palm Beach County’s plan to five-lane Coconut Blvd. from 60th Street North to Northlake? Jablonski said that before even considering expanding Coconut, State Road 7 should be pushed through to Northlake.

What can be done to deal with the long-delayed completion of the Corbett levee? Jablonski said flooding issues have improved over the years, but he is not familiar enough with the Corbett levee situation to comment.

Are you for or against incorporation? Jablonski said he does not like the idea of more government, which would mean “lots more regulations. I grew up here when it was all dirt roads… [but] the community is definitely growing at a high rate. I mean, just look at the traffic… It’s a fine line. But I’m old school. I like it how it is. I don’t want to disrupt the community.”

In closing… Jablonski said, “No doubt, it will be a huge learning process for me. But I will give it my full attention and best effort.”