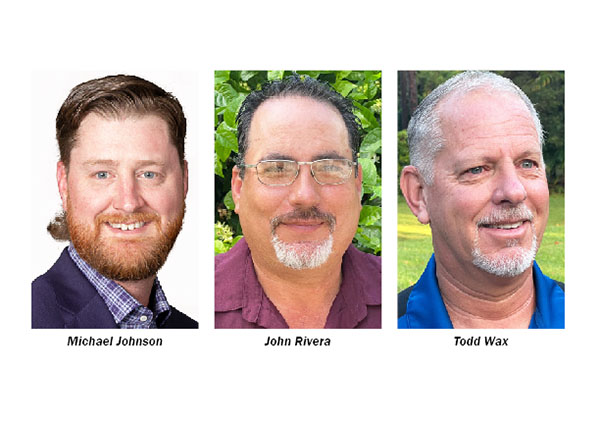 In this story, we focus on the candidates for ITID Seat 5, where incumbent and current ITID President Michael Johnson is seeking re-election. The responses of the three Seat 5 candidates — Johnson, who lives on 64th Place North; Tangerine Blvd. resident John Rivera; and Todd Wax of 61st Lane North — are presented here.

Background: Johnson is originally from Michigan. He moved to Florida 12 years ago, and to the ITID area in 2016. He is married to wife Isabella and is plant manager for TKM Bengard Farms in Belle Glade, one of the nation’s largest lettuce producers. He won Seat 5 in 2018, defeating Rivera in that race.

Why are you running for re-election? “We live here, and we plan on staying here. We want to keep the area’s hometown feel,” he said. “We have a lot of good projects going for the community. I want to see them through to the end.”

If elected, what would be your top three priorities? Number one, he said, would be seeing to completion plans for the R3 road paving, milling and traffic calming tables. “The traffic calming is very important for safety with [ITID] roads being used as cut-throughs to Northlake and Seminole Pratt,” he said. “We don’t want all our roads out here looking like Northlake and Seminole Pratt.”

His second item is also related to the R3 project. “The traffic is really tough on some of our residents. We want to create better traffic flows to help with the congestion we have around some schools,” he said, citing particularly problems on North 162nd Drive and 180th Avenue North.

Number three is completing the Corbett levee, he said, noting that he is ITID’s representative to the Palm Beach County Water Resources Task Force. “We’ve worked with [several agencies], and the project has been brought back to life,” Johnson said. “All the permits are there. Now it’s just a matter of getting the rest of the funding so that it is not a burden on the taxpayers.”

Should the Acreage Athletic League enjoy a near monopoly on youth sports in ITID? Johnson said he has “no problem” with the AAL but also could see more than one organization holding a service provider agreement to oversee sports in district parks. “We need to do whatever we need to do to make sure residents are being provided the best service,” he said.

Do you favor Palm Beach County’s plan to five-lane Coconut Blvd. from 60th Street North to Northlake? “No. It would not be safe for that area,” he said. “The obvious solution is extending [State Road 7] through to Northlake… The county is working with us.”

Are you for or against incorporation? “It’s scary to see what’s happening with Palm Beach Gardens pushing farther out Northlake… and now we have Westlake,” he said. “We want residents to be aware. We want to give them accurate information… and provide them with the options. At the end of the day, it’s up to the residents to vote. They deserve the right to vote yes or no.”

In closing… Johnson said his style is not to be overly vocal during meetings but to work behind the scenes with staff to accomplish goals for the community. “We have a lot on the table, and a lot of programs that need follow-through,” he said. “I want to keep things going and continue to fight for the residents of the district.”

Background: Rivera was born in Puerto Rico and has lived in Florida since 1979. He moved to Palm Beach County in 1989 and to the Acreage/Loxahatchee area in 1999. He started his own business in 1997 and now is president and owner of Sunshine Safe & Lock. He is married to wife Jennifer, and they have four children. A former president of the Acreage Horseman’s Association, he ran unsuccessfully for Seat 5 in 2018.

Why did you get into the race? “The board meetings are embarrassing. They’re shameful. The fighting back and forth. There’s just so much division. The board members need to be respectful of the speakers [during public comments] and respect each other,” he said. “I don’t know Mr. Johnson at all. I don’t see myself as running against him. I’m running for the seat. But as far as I can see, he hasn’t done anything for us.”

If elected, what would be your top three priorities? Number one, he said, would be “trying to unite the community. Get rid of some of the division… and listen to the people.”

Number two, he said, would be improved maintenance of the parks. “The parks are a great tool to bring people together… [but] I see all sorts of safety issues,” said Rivera, who plays on an adult co-ed softball team that uses ITID parks. “The fields need to be safe.”

Number three would be more law enforcement. “There’s a lot of petty theft in the area,” Rivera said. “We could use more police who could pull over people who don’t belong here. It’s all about safety.”

Should the Acreage Athletic League enjoy a near monopoly on youth sports in ITID? “I don’t have any argument with any organization [being in the parks] as long as they are legitimate and doing something good for the community.”

Do you favor Palm Beach County’s plan to five-lane Coconut Blvd. from 60th Street North to Northlake? “No, that’s way too big. I would not support that at all,” said Rivera, adding that State 7 needs to be finished to Northlake instead.

What can be done to deal with the long-delayed completion of the Corbett levee? “It has to be a priority. Who knows how bad it could be the next time?” Rivera said regarding future hurricanes or major rain events. “It’s a life-safety issue. We’ve got to get that fixed.”

Are you for or against incorporation? “I’m totally against it,” he said. “I won’t support it today or four years from now.”

In closing… “I’ve been here a long time, and I can see what’s going on,” he said. “I don’t like the direction we’re going in.”

Background: Originally from Michigan, Wax has lived in The Acreage since 1989 and has worked for the Village of Royal Palm Beach since 1999. He began his career there as an electrician in the Public Works Department and is now a plans examiner and analyst. Wax also is the owner of Wax Electric LCC, a family owned and operated electrical company. He has been married for 34 years to wife Christine. They have two adult children. This is his first run for public office.

Why did you get into the race? “Having worked for a municipality all these years, I understand how they work,” he said. “I understand what it takes to run it, especially from the budget side of things… As a businessman, I see that side of it, too.”

If elected, what would be your top three priorities? Wax did not list a specific set of priorities but said that many of ITID’s problems boil down to too much division on the board and the supervisors “trying to push things down the people’s throats.”

“They’re trying to overextend the boundaries of what they do. They’re not paying attention to what really is necessary to be done,” Wax said. “I don’t feel like they’re being completely honest with the community. I will be. I think I have something to offer in terms of settling things down.”

Should the Acreage Athletic League enjoy a near monopoly on youth sports in the district? “There has to be a main organization that keeps the programs running… [But] it’s just not right not to share,” he said, referring to the district’s recreation facilities.

Do you favor Palm Beach County’s plan to five-lane Coconut Blvd. from 60th Street North to Northlake?: “It’s crazy the amount of car traffic [that already exists]… There are no horses walking around the roads anymore. There’s too much traffic… We have to be realistic. It’s just part of the area growing. We have to make the traffic flow. We need to do both,” said Wax, referring to plans to five-lane Coconut and push State Road 7 through to Northlake.

What can be done to deal with the long-delayed completion of the Corbett levee? “I’m not sure why this hasn’t gotten done,” he said. “[The supervisors] should make it a priority.”

Are you for or against incorporation? “I don’t see the need for something like that. I’m not for more government. It’ll be a huge expense and a waste of money for all the people who live here with very little benefit,” said Wax, adding that fears of annexation by one of several surrounding municipalities is “just total hot air.”

In closing… “[Johnson] doesn’t stand up for the masses of the community,” Wax said. “In fact, I don’t see him standing up for anything. He just goes with the flow… I have zero interest in politics. I really just want to help.”