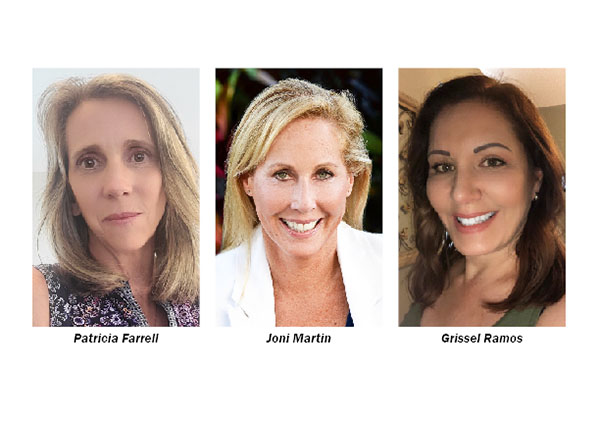 In this story, we are focusing on the candidates for ITID Seat 3, where incumbent Supervisor Joni Martin is seeking re-election. The responses of the three Seat 5 candidates — Patricia Farrell, who resides on 87th Lane North; Martin, a Hall Blvd. resident; and Grissel Ramos, who lives on 37th Place North — are presented here.

Background: Farrell is part owner of KP Farrell Inc., an athletic training facility recently opened in Royal Palm Beach under the named D1 Training. Born on Long Island, N.Y., she grew up in Miramar. She and husband Kenny moved to The Acreage in 2003. They have four children, ages 13 to 30. She worked for a construction company for some 30 years, and for the last eight years has managed a Palm Beach condominium building.

Why did you get into the race? “For a while, I’ve been thinking I need to get more involved in the community… I’ve been disappointed at what I’ve seen at some recent board meetings. It has been embarrassing,” she said. “I thought, ‘I can help here.’ With my history, with what I’ve done, I think it can be really beneficial. I’ve had to handle a lot of difficult situations.”

If elected, what would be your top three priorities? Number one, she said, would be to encourage more events, especially at Acreage Community Park, that would create a greater sense of community.

Number two, she said, would be to avoid “unnecessary legal battles,” adding that she would work with other entities to head off such confrontations.

Number three, she said, would be to work with other municipalities in the area, such as Westlake, to improve traffic flow within the district.

Should the Acreage Athletic League enjoy a near monopoly on youth sports in ITID? Farrell noted that three of her children played youth sports under the AAL umbrella, but, “I think it would be beneficial to have another entity involved… [and] give people another option.”

Do you favor Palm Beach County’s plan to five-lane Coconut Blvd. from 60th Street North to Northlake? “It depends on whether State Road 7 is extended to Northlake,” she said. “If it is, I don’t see [the Coconut expansion] as necessary. But if they don’t do State Road 7, then yes, it probably will be needed.”

What can be done to deal with the long-delayed completion of the Corbett levee? “We need to get a professional engineer in here and get it done… in a cost-effective way,” she said.

Are you for or against incorporation? “I believe in incorporation. It would allow us to control how it’s done… and give us the ability to regulate the laws we live under,” she said, noting that would not be the case if the district were annexed by one or more of the surrounding municipalities.

In closing… “If you choose me, you’ll get an honest person who is not in it for my own special purposes,” Farrell said. “You get someone who really wants to represent the best interests of the residents.”

Background: Martin is a New York native who studied radio and TV production at George Washington University. She has lived in Palm Beach County’s western communities for almost 20 years and in the ITID area for six. A makeup artist with a background in retail sales, Martin is a single mother who has long been involved with animal rescue. She is seeking her second term on the board.

Why are you running for re-election? “I think we’ve made a lot of great changes to streamline and update the way the district works… We’ve got the best staff the district has had in a long time,” Martin said. “Four years on the current board has been an invaluable learning experience and given me very important background information on the district and the current issues facing our area… I want to continue to make positive changes for the future of the district.”

If elected, what would be your top three priorities? Number one, Martin said, is continuing to maintain and improve ITID’s roads and drainage. “We’ve tackled a lot of the old issues, and done a massive amount of work, especially since 2020,” she said. “We’ve streamlined things to be more efficient.”

Number two, she said, is also road related. “We need to add additional traffic-calming measures, such as more speed tables,” she said, noting that many of the district’s roads are being used as cut-throughs between major thoroughfares. She pointed out that unlike a municipality, ITID does not have the authority to put up stop signs or traffic lights, but she added that ITID is working on an interlocal agreement with Palm Beach County that would allow more flexibility.

Number three, she said, is continuing to update ITID parks and athletic amenities, especially with an eye toward safety and protecting ITID facilities. “Four years ago, there were no working cameras in any of our parks,” Martin said. “Now we have 70 cameras throughout the district.” She said that while the enhanced video presence has helped curtail vandalism in the parks, it “continues to be a major issue for me.”

Should the Acreage Athletic League enjoy a near monopoly on youth sports in the district? “No, I don’t think any entity should have a monopoly on anything in the district,” she said. “We need more checks and balances… That’s something that should be examined going forward.”

Do you favor Palm Beach County’s plan to five-lane Coconut Blvd. from 60th Street North to Northlake? “Absolutely not. We have to do anything we can to stall them,” she said, adding that the obvious solution is to connect State Road 7 to Northlake.

What can be done to deal with the long-delayed completion of the Corbett levee? The unfinished levee “is definitely a danger to our community. It’s something that has to be completed,” she said, explaining that it’s a multi-jurisdictional task that requires good communication and good relationships with a variety of governmental entities. She said that ITID has hired a lobbyist to seek state money and is applying for grants to gather the remaining $6.8 million needed for what is now projected to be a $10 million project. “I think we’re in better shape going forward than we’ve been in past years,” she said.

Are you for or against incorporation? “At this point, the issue is not yes or no,” Martin said. “It needs further clarification and explanation.” Martin said she hates to see the level of conflict the issue has created in the community and that ITID needs to restart the discussion from scratch. “There’ll have to be much more transparency for me to ever support it,” she said. “And I certainly don’t want to see any sort of annexation from municipalities around us.”

In closing… Martin cited the four years of knowledge and experience she has gained as board member and said, “I want to help the district grow and move forward, and deal with the encroachment all around us… I’m very much concerned with protecting the area and representing what residents want.”

Background: Ramos, who was born in Cuba and grew up in Miami and California, returned to South Florida where she has held administrative positions with a major credit card company. She and her husband moved to the ITID area in 2006 and has since cared for her daughter and her mother, both of whom had health issues. Now that their situations have changed, the mother of five and grandmother of nine said she’s ready to become more involved in the community.

Why did you get into the race? The 2016 presidential election and the advent of COVID-19 increased her interest in politics, she said. “It also became clear to me how important local politics are. I started thinking, ‘I can be a positive, impartial voice for the people.’ I know it sounds corny, but that’s who I am, what I want to be. I want to represent the people, not my own opinion,” Ramos said.

If elected, what would be your top three priorities? Number one, she said, “would be to do anything I can, big or small, to protect our way of life and our citizens.” That would include protecting and improving ITID’s roads and drainage system, she said.

Number two would be managing costs. “People are getting hit from all sides with higher gas and food prices, tax increases,” Ramos said. “We can’t allow our [ITID] taxes to get out of control.”

Number three would be to bring the board together. “A lot of what we see going on now is very toxic. It’s painful to watch,” she said, adding that her experience at the administrative level of a major corporation would help her create a better environment among board members. “You have to work with each other… It doesn’t mean we can’t disagree, but it doesn’t have to turn nasty,” she said. “We can and should be working together for the community’s good.”

Should the Acreage Athletic League enjoy a near monopoly on youth sports in the district? “We need sports in our community. I support the AAL. They give wonderful service in many areas,” she said. “[But] I believe we live in a country where competition is healthy. Parents should have a choice without having to go outside the community.”

Do you favor Palm Beach County’s plan to five-lane Coconut Blvd. from 60th Street North to Northlake? State Road 7 needs to be pushed through to Northlake before any consideration is given to expanding Coconut, she said. “We’re putting the cart before the horse,” Ramos said. “I see both sides of it, but I feel for the homeowners on Coconut.”

What can be done to deal with the long-delayed completion of the Corbett levee? “I don’t like kicking the can down the road. It has to be completed,” she said. “I’d like to make it a priority… [but] I realize there are a lot of other projects on the table.”

Are you for or against incorporation? “I realize the community has to grow. It has to evolve… [but] developers are fundamentally changing our way of life. Now we don’t have a seat at the table. We don’t have a voice. Incorporation may be the only way to get that seat and that voice,” she said. “We fell in love with the ‘Lox Life.’ We love our ATVs, buggies and boats. I want to protect as much of that as we can. If that means I’m pro-incorporation, then so be it… Either way, it needs to come to a vote so that we can put the issue to bed one way or another.”

In closing… “I just want to reiterate that I’m not in this for anyone. I’m not affiliated with anyone,” Ramos said. “I’m here as your neighbor and your friend, and to look out for you and your best interests… I’d like the opportunity to be your voice.”