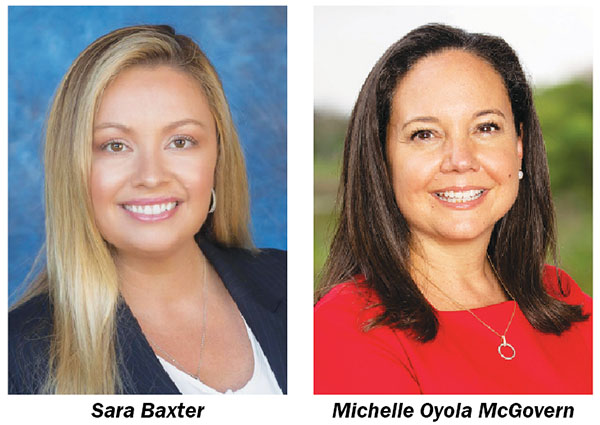 District 6 includes all of the western communities, along with the Glades area. While the election will be held Tuesday, Nov. 8, mail-in voting is already underway, and early voting begins Monday, Oct. 24.

Sara Baxter — Baxter is a second-generation Floridian. An Acreage resident, she graduated from Palm Beach State College with a bachelor’s degree in business administration. Together with her husband, Baxter owns an automobile repair shop called Foreign Auto Specialists on Belvedere Road. In real estate, she works with Continental Properties.

“I’m a wife and mother of three boys and a small business owner,” Baxter said. “The story of my life is being able to overcome challenges and to work with the resources available to me and make them the most effective.”

Baxter said she decided to run after facing what she feels were unnecessary challenges while opening and operating her small business.

“I have come across many challenges from trying to find a space to open our small business, all the way through the zoning and planning processes,” she explained. “I wanted to get into this race to help our economy improve, and that starts with the growth and development of new small businesses and making the process simplified.”

Baxter said she wants to use her experience as a small business owner to help better manage the county budget.

“People are struggling. They are having trouble affording their gas, FPL bill and groceries,” she said. “The county can do a better job at alleviating some financial burdens from them by not increasing our county’s budget, which they currently passed to increase it by 13 percent over last year.”

During the final stretch of the campaign, Baxter said she is working to get in front of as many voters as possible.

“I have been talking to the residents and finding out what their issues are, so I can address them should they elect me their next county commissioner,” she said.

Her campaign themes include reducing costs and better infrastructure. “I want to improve the infrastructure, specifically in the unincorporated areas of Palm Beach County, improving roads and reducing congestion,” Baxter said. “I would like to avoid overdevelopment of our western communities. I would also like to identify wasteful spending and prioritizing the budget instead of increasing it.”

For example, she is not in favor of the affordable housing bond program that the county placed on the November ballot for approval.

“Nobody wants to scale back, but people are struggling,” Baxter said. “It’s not the time to ask our residents to pay more toward a $200 million general obligation bond.”

She is, however, a supporter of the Palm Beach County Sheriff’s Office and said the county needs to pay its deputies better. “We need to keep great sheriff’s deputies here and increase their pay to get on par where they want to stay here,” she said.

“A lot of people who cannot afford to live here are moving up to northern counties,” she said. “The changes I would like to see would help the people who currently live here. To help with affordable housing would be to give the people who do not fall under the homestead exemption some tax relief, so they don’t have to pass down the cost increases to their renters. That would be a better way to solve affordable housing than asking residents to keep building more units.”

Baxter believes that she has the right type of experience to best serve residents on the county commission.

Michelle McGovern — McGovern advanced to the general election ballot after winning a three-way primary with nearly 57 percent of the vote.

A Palm Beach County native of Puerto Rican heritage, McGovern worked for former U.S. Sen. Bill Nelson for 18 years as his state director. She now works for Baptist Health. Married to Wellington Councilman John McGovern, she is the mother of two teenage daughters.

McGovern said that she is running on her long record of experience.

“I served as Sen. Nelson’s top aide for 18 years, and for my entire career, I have volunteered in the community and have a record of success,” she said. “I helped bring the first rape treatment center to the county, expedited the dyke around Lake Okeechobee and served on the Wellington Education Committee. I have the experience that allows me to hit the ground running on day one.”

She said it was this unique experience that led her to run this year.

“The opportunity came about, and when thinking about it, I realized that I have been doing a lot of public service in this district, and I know this district well,” McGovern said. “I know that I have the experience. I also feel strongly about bringing a Latina perspective to the county commission.”

She noted that voting is already underway, with vote-by-mail ballots arriving this week.

She explained that her campaign themes remain the same as the primary election.

“I’m really focused on the issues that voters care about right now — affordable housing, public safety and transportation. Water is a big issue for me. I have a background in water policy,” McGovern said.

On the county commission, she will focus on those issues.

“I would like for us to put a real dent in the affordability issue in Palm Beach County,” McGovern said. “People need to be able to live where they work. That includes teachers and first responders and janitors.”

She believes this will require a multi-pronged approach.

“If the housing bond passes, that helps to create more inventory,” McGovern said. “I think it needs to be multi-faceted. We need to be thinking outside the box on housing issues, such as rethinking old strip malls. We need to bring about more housing opportunities for everyone.”

Regarding public safety, she said, “We cannot take our public safety for granted, and that is something I will always have my eye on.”

“Every time we build, we need to make sure access to transportation is available at the same time,” she said. We need to extend State Road 7. Meanwhile, the commute from east to west and west to east is a struggle for everyone.”

“Women are the decision makers in this country, not just this county,” McGovern said. “We need to be helping them in the issues that matter the most to them. Whether that is access to affordable daycare or opportunities for good-paying jobs, we need to think about those problems from a woman’s perspective.”

Water issues are also crucial for the county’s future, she said.

“We cannot keep our eye off water issues, whether that is water storage or clean water. It is our most precious resource,” McGovern said.

She noted that the county was in the middle of a drought before Hurricane Ian. Now, too much of that excess water will be lost because the county does not have enough opportunities to store it.

McGovern believes that voters should support her because of her many years of local experience.

“I think that experience matters,” she said. “I have a record of service in this community, and I am asking for their vote to allow me to continue to serve.”