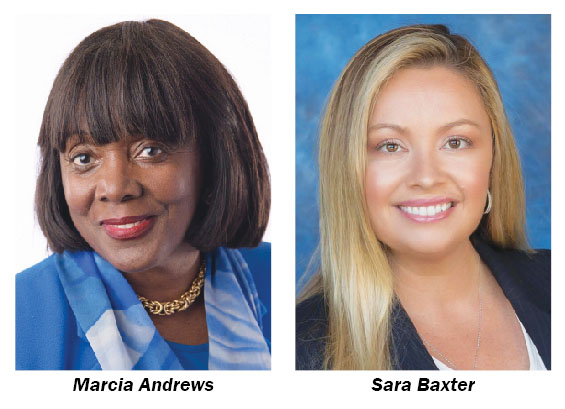 Voters granted longtime District 6 School Board Member Marcia Andrews a fourth term on the Palm Beach County School Board during the general election on Tuesday, Nov. 8.

Andrews and Showalter advanced to the general election from a five-candidate primary in August. Andrews nearly got the 50 percent needed to win outright at that time. As the returns were coming in on election night, Andrews said she was proud to see her continued support from residents.

“It made me feel so happy that they continue to believe in me,” she said. “I work for the people. To see votes coming in from parents and voters all over the district, it brought a feeling of gratefulness.”

Andrews, who was elected to the board after a long career with the school district, noted that she meets with Superintendent Michael Burke at least once a week and will continue to focus on the key issues that she campaigned on.

“Keeping our children safe is a big issue for me, as is mental health and academic success,” she said. “Every child needs to be happy and successful as they move through their school years here in Palm Beach County. When they graduate, I want there to be a path for them, either through college or a career.”

Andrews noted the concerns from some during the pandemic that the school board was not taking enough input from parents, and stressed that she will continue to work with local communities to gather input and seek out additional avenues for parental involvement.

“I will continue to listen to parents around the district,” she said, adding that she regularly meets with local groups. “I will look for any new formats to meet with parents to remind them that the schools belong to them.”

Andrews thanked the residents for their vote of confidence in her.

“The students mean everything to me,” she said. “Every child is special in my heart and soul, and I will be available for the students to help them with their success.”

It was a squeaker of a race for State House in District 93, which includes Wellington, where Democrat Katherine Waldron narrowly defeated Republican Dr. Saulis Banionis. Waldron took 33,824 votes (50.65 percent) to edge past Banionis, who took 32,962 votes (49.35 percent).

While all three state constitutional amendments failed to meet the 60 percent threshold to pass, the two Palm Beach County ballot questions did pass.