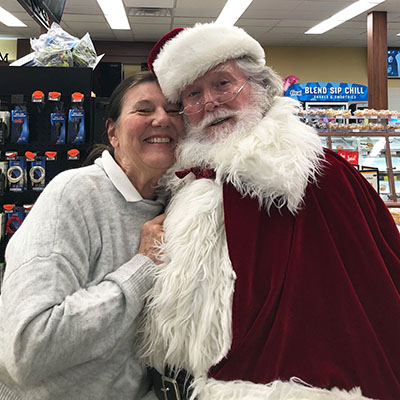 Listen to this, kids: I saw Santa Claus! Not the Santa’s Helper kind, the real, honest-to-goodness Santa!

I was in historic and charming Cedarburg, Wisconsin, visiting my mother on her 94th birthday, when I pulled into a gas station — and there he was! Barely remembering to put the car into park, I leapt out yelling, “Santa! Santa! Santa! It’s me, Debbie!” to which he replied, “Ho! Ho! Ho!” in a jovial and robust sort of way.

If that isn’t proof that he was the real Santa, I don’t know what is.

So I ran over to the gas station door and held it open for him, to which he replied, “Oh! thank you!” Just like Santa would have. When he smiled at me, I took that opportunity to say, “See? I’m nice despite what you’ve heard.” He didn’t comment on that, but he didn’t “ho-ho-ho” either, so I think I’m good.

Then, even though it was none of my business, I asked, “What are you doing here, Santa?”

I mean, I wouldn’t have asked except that there is a life-size gingerbread house just a few blocks away, right in front of city hall, and you’d think that that is where you’d see Santa, not at a Kwik Trip. But the sun had set, and the gingerbread house was closed, so, just like any six-year-old, I had to ask. What was he doing here?

“I’m here to check out the plumbing,” he said.

Did you hear that, kids? Santa Claus went to Kwik Trip to check out the plumbing! You know what that means, don’t you? That means that, somewhere in the back — in the bathroom or near the utility sink — the pipes had sprung a leak! And the manager of that gas station — even though it’s Christmastime and people are buying liquid refreshments to beat the band — the manager probably didn’t have enough money to get it fixed. And, just like you and I, when we don’t have enough money for something we want, we write to Santa!

Now, you know that December is a very busy time for Mr. Claus, but when he got that manager’s letter, he knew that plumbing requires a lot of pipes and union connectors and S-bends and P-traps (no pun intended), so before filling up his sleigh with the wrong stuff, he thought he’d better zip down to Cedarburg to see exactly what it was that he needed. Santa is so thorough!

While Santa was back there, checking things out, I started to get worried that no one would believe me. So when he came out, I asked him if he would let the clerk take our picture, and he agreed! (That’s him in my picture box this week.) Then I waited outside so I could watch him climb up to the roof and get into his sleigh but — wouldn’t you know it? — after the clerk took my picture with Santa, all those people who came in to buy liquid refreshments wanted their picture taken with Santa. So, I never got to see him leave. Instead, I walked all around that gas station, looking up, trying to see the reindeer. I couldn’t see any, but I heard a lot of prancing and pawing of each little hoof, so I know they were up there.

And the next time I go to Cedarburg, I’m going right back to that Kwik Trip, and I’m going to ask them if their plumbing is working OK, and when they say, “Yes. Why?” I’ll just wink at them. Santa answered their manager’s wish…

And I hope Santa answers yours, too. Merry Christmas!