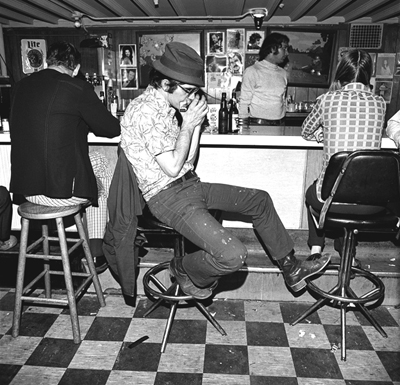 A fitting description of the Norton Museum of Art’s new summer exhibition “Clubs, Joints and Honky-Tonks: Photographers Experience the Music Scene” would be “the music seen.” The exhibition opened Thursday, June 21 in conjunction with the museum’s rocking Art After Dark Summer Soulstice party celebrating the summer solstice. “Clubs, Joints and Honky-Tonks” will run through Sept. 30.

Curated by Tim B. Wride, the Norton’s William and Sarah Ross Soter curator of photography, “Clubs, Joints and Honky-Tonks” features work by photographers who have immersed themselves in the places, spaces and energy of concerts, shows and spontaneous live performances. More than 75 images provide a long-overdue insight into the waves of performance, participation, adulation and energy that migrate toward the stage from audiences and, indeed, from the venues themselves. There will be plenty of illumination into the worlds of rock ’n’ roll, country music, hip-hop, and the blues, including images and essays from photographers Jeff Dunas, Lynn Goldsmith, Henry Horenstein, Elliott Landy, Moby (who as a performer had a unique perspective from center stage) and David Scheinbaum, as well as Heavy Metal Parking Lot, the 1986 video documentary by Jeff Krulik and John Heyn about Judas Priest fans.

“All too often in most music imagery, the overriding visual emphasis is placed upon the notoriety of the performer rather than the performance and energy of the music,” Wride said. “The photographs that dominate ‘Clubs, Joints and Honky-Tonks’ shift the focus of the experience away from the dominating celebrity and personalities of the performers toward the often overlooked participation of the listeners who give the music meaning — and the not-so-passive spaces and places in which performances take place.”

“Clubs, Joints and Honky-Tonks” opens with works that document one of the great revolutions in music, performance and audiences — the iconic images taken by Eliott Landy, whose visual record of the Woodstock Music & Art Fair in August 1969 inspired generations of music utopians.

“Each of the artists featured in the exhibition brings his or her unique pictorial sensibility as well as their own understanding of the music genres they have chosen to portray,” Wride said. “The interplay between the artists’ vision and the character and style of the music provides a fertile opportunity to expand our awareness of the potentials of intertwining the visual and performing arts.”

Among the other participating artists in the exhibition are:

• Santa Fe-artist and educator David Scheinbaum, whose unlikely intersections into the worlds of hip-hop and house music cast a classical eye upon an often-anarchic experience. With a sensibility that recalls that of the great jazz images of Roy deCarava and his penchant for experimentation and interpretive styling, Scheinbaum unleashes in his images the energy and barely restrained chaos of the nightclubs he prowls.

• Californian Jeff Dunas’ photographic odyssey “State of the Blues” is the source for the stunning and evocative suite of images that recalls the straight-forward simplicity of Walker Evans, and the sensuous tonalities and sly observations that have made Dunas’ more widely known celebrity works so idiosyncratic. His images of the humble spaces and unassuming venues that marked the route of the genre from its southern roots to its northern boundaries are elegantly rendered and meticulously charted, but also seem to channel the plaintive wail of the music itself.

• A radically different odyssey is charted in the vast seas of audiences pictured from center stage by musician and performer Moby. From his privileged position as a touring frontman, Moby’s expansive views afford an unadulterated experience of communal energy while freezing the momentary experiences and character studies of multitudes of individual audience members.

• Henry Horenstein’s homage to the faces and spaces of country music — a body of work that provided the impetus and partial title for the Norton’s exhibition — leads us on a journey of quite a different kind as do the raw insider perspectives of the rock ’n’ roll scene chronicled by Lynn Goldsmith.

Of these artists and their varied approaches, Wride explained that, “In all of the works that are featured in ‘Clubs, Joints and Honky-Tonks,’ there is a sophisticated, yet seemingly effortless merging of music genres and performance with the strategies and techniques employed by the photographers. This complex interweaving and reconciliation of performance, environment and image-making could only be achieved by photographers whose understanding and passion for the music is matched by the creativity and courage of their talent.”

The Norton Museum of Art is located at 1451 S. Olive Ave. in West Palm Beach, and is open from 10 a.m. to 5 p.m. Tuesday, Wednesday, Friday and Saturday; 10 a.m. to 9 p.m. Thursday; and 11 a.m. to 5 p.m. Sunday. It is closed on Mondays and major holidays. General admission is $12 for adults, $5 for students with a valid ID, and free for members and children age 12 and under. Special group rates are available. Palm Beach County residents receive free admission the first Saturday of each month with proof of residency.