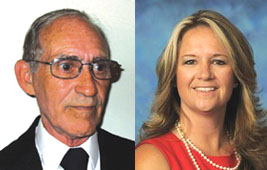 Acreage resident Ken Hendrick is challenging incumbent Michelle Damone in the race for Seat 4 on the Indian Trail Improvement District Board of Supervisors.

The race will be on the November general election ballot, and the winner will claim a four-year term on the board, which manages drainage, roads and parks in The Acreage.

Damone serves as president of the board, which is a designation chosen annually from among the five supervisors.

In speaking with the Town-Crier this week, Hendrick went over a litany of concerns he has with how ITID is being run. For example, Hendrick said he can’t understand why three mowers purchased a year ago have sat unused.

“These are the type that hook up to a tractor, and the mowers are still sitting in the same place as when they bought them, and yet they’re outsourcing the mowing to other companies, and they’re not doing the mowing themselves. I’d like to know why,” Hendrick said.

Hendrick said he has been told the district was offered training by the manufacturer, John Deere, but that has not happened. “The person who would come out and give the seminar would be from John Deere itself, and they’ve never taken advantage of that,” he said. “To this date, no one has ever contacted John Deere about how to use that equipment.”

Further, Hendrick also disagrees with the outsourcing that is taking place. “They’re outsourcing so much stuff out of our community when they could be doing it themselves, or outsourcing it to someone inside the community,” he said.

Another gripe he has is that horse trails are not being maintained. “There’s hundreds of trails around here. I went by, and they have screen line going across the trails, a post sticking up out of the trail, brush on the trails, and the people with the horses have to ride the horses on the road,” he said. “Some time ago, when [former Supervisor] Mike Erickson was in office, it was voted on that the board maintain the trails. Nothing has ever been done. More attention is being paid to garbage in somebody’s yard than the horse trails. Garbage in yards should be handled by Palm Beach County Code Enforcement, not Indian Trail.”

He added that he felt that the outsourcing of the mowing of the swales is excessive because 90 percent of them are maintained by the property owners. “They’re only mowing the areas where there is a vacant house,” he said, adding that he thinks the mowing should be charged to the homeowner or the bank that holds the title.

Hendrick, 72, is married with one grown daughter. He has lived here since 2002 and has a home-based sign business. He is also active with the Acreage Rotary Club. He said he has no personal issues with Damone specifically and intends to run a clean campaign.

Damone said she is pleased with the progress ITID has made in the past several years.

“This will be my third term, and one thing I’m proud of is that I still feel as passionate for the position as I did the first time around,” she said. “I started with Indian Trail as a parks advocate. We’re approaching the expansion of Acreage Community Park, which has been in discussion for more than a decade. I’m very proud to be a part of the expansion. I’m looking forward to getting together with all the organizations to develop a program for the community center.”

Damone is also proud of the fiscal responsibility the district has shown after years of turmoil. “We now have a solid board of supervisors,” she said. “I’m proud that we were able to hire the caliber of district administer in Tanya Quickel, and to have our reputation in the community restored.”

She is also proud of the quality of the park system overall, such as Kidscape Park, which was recently remodeled and made more accessible to children with disabilities.

“I am proud of the situation that occurred when we developed Coconut Park, that one with the water retention, and I was proud to be a part of the team that developed that into one of the most used passive parks in the community. You see adults and young adults, and even see young children exercising at Coconut Park.”

While those are big projects, the small projects are also important, she said. “The thing that I’m most comfortable with is the constituency I have met along the way, and the small tasks we have accomplished, even when it’s finding funds to pave a road or when we add sidewalks to our roadway system so that children have safe paths to walk on,” Damone said.

She is also proud of her involvement with Nicole’s Law, approved by the state requiring children under 16 to wear a helmet while riding a horse.

“The people of the western communities were able to be part of a law that was implemented throughout the State of Florida,” she said. “I am very proud of Nicole Hornstein Equestrian Park and the expansion that we have done over there. I’m looking forward to the opening of Hamlin House so that equestrians have a place to meet when they’re doing their horse shows.”

Damone said she still wants to work on safer trails throughout the community and interconnectivity for the equestrian community.

She is also happy that The Acreage finally has its own library. “Just to be able to partner with the county and be able to provide the library — that was over a decade in the making,” Damone said.

Aside from the Seat 4 race between Damone and Hendrick, the November ballot will also have incumbent Carlos Enriquez facing off against challenger Gary Dunkley for Seat 2.