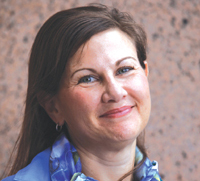 Epstein, 46, who lives in Palm Beach and is a nurse, became deeply involved in mortgage issues when she separated from her ex-husband several years ago and her home went into foreclosure.

“I gained recognition as a citizen sleuth and financial fraud investigator for both the fraud in mortgage-backed securities as well as the foreclosure fraud on real estate documents,” Epstein said. “It’s not just foreclosure, there’s satisfaction of mortgages and other documents in our public records that have anything to do with foreclosures, based on the fact that Wall Street used homes as the basis for a big gamble, and the fallout from that is this massive fraud that we’re seeing on the back end in this real-estate market.”

Epstein said the situation has affected municipal employee pension funds and county investments because they were heavily invested in those funds. This is why she decided to run for county clerk.

“There has been a lot of activity and a lot of congressional hearings, and investigations and political movement and law enforcement movement both positive and negative, but to this day there has been no real, meaningful solution at least for the families in this community and my state,” she said. “For families in states where the property values haven’t plummeted as much as our state, there is some relief with the $25 billion settlement, but I don’t think it’s going to help the families in my state because of the plummet down to 50 percent, 60 percent of the value of their property.”

Epstein said she attended the county budget meeting Tuesday where officials were happy that property values appeared to be slightly higher. She believes that is because foreclosures slowed while banks tried to fix mortgage documents after the story gained public attention.

All county and local governments depend on property values — the revenue stream that pays for public services and schools, Epstein said.

Epstein said that Bock, the two-term incumbent, has noted that handling foreclosures is just a small percentage of what the clerk’s office does. “That’s actually a grave misrepresentation,” she said. “That’s why I’m running, because there has been no meaningful response. There’s been no elected official in my county, in my state except for [former Congressman] Alan Grayson, who has come out and said publicly, ‘This is wrong; this is fraud.’ There are victims here, and all of us are victims.”

Epstein added that the county’s depository, Wells Fargo, has many properties in foreclosure, a number of which are in disrepair with code violations.

“We should be able to say to our own depository institution, ‘You are making money off of banking fees by being our depository institution. Here is a listing of properties in our county that really need some work. Do it.’ We took a hit last year on code enforcement staff, and we’re trying to beef that up because of these problems with these bank-owned properties,” she said.

Epstein continued that other banks have agreements with county agencies that she feels should be used to leverage them to maintain their foreclosed homes. “Vacant properties pose a danger if the pools aren’t secured, if they turn into crack houses,” she said. “We have leverage we’re not using, and we’re cost-shifting that to our dwindling resources of code enforcement.”

She said the clerk’s office can address the issue because it sees the foreclosures and which banks are doing them. “We have that data,” Epstein said. “We can work with the other constitutional officers. We can work with the Palm Beach County Commission, we can educate our citizenry, and I can educate the media. I have a much better position as opposed to just a citizen in the community. I have a position to actually implement policies and do things, and these are just a few of my ideas.”

Another issue in the campaign, she said, includes the clerk’s office holding funds that were to go to the Office of the Inspector General from municipalities until a lawsuit brought by 14 municipalities is resolved. Epstein pointed out that the clerk is withholding all the revenue until the lawsuit is resolved. “She believes it is her duty to withhold the funds of all 38 municipalities, not just the 14 that are currently named in the lawsuit,” she said.

For more information on Lisa Epstein and her campaign, visit www.lisaforclerk.com.