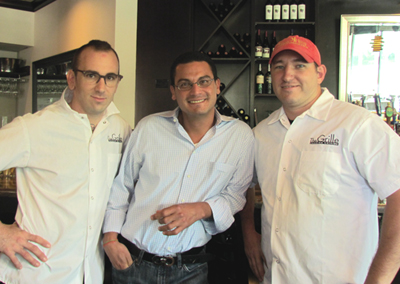 Members of the Wellington Village Council agreed this week to extend the hours of operation for the Grille Fashion Cuisine on South Shore Blvd. and sign off on a cocktail lounge designation for the business, but they also insisted on conditions to protect nearby homeowners.

At a meeting Tuesday, the council approved a conditional-use permit that will allow the restaurant to have a liquor license within 250 feet of residences.

Though the restaurant’s owners had requested to stay open until midnight from Monday through Wednesday and 2 a.m. Thursday through Sunday, council members were concerned about nearby residents.

“Noise restrictions are there to protect everyone,” Councilman Matt Willhite said. “I have some concerns about the residences in the area and the time frame.”

Instead, council members voted to extend the restaurant’s hours of operation from 11 p.m. to 11:30 p.m. Monday through Thursday, and from 11 p.m. to 1 a.m. on Friday, Saturday and Sunday. They also required that outdoor food and drink service cease by 11 p.m. every day, and barred outdoor entertainment.

Additionally, the Grille must undergo a yearly audit and prove that at least 51 percent of its annual income comes from food sales.

Director of Growth Management Bob Basehart explained that the business must have permission from Wellington to operate a cocktail lounge within 250 feet of a home.

“Commercial properties within 300 feet of a residential structure are required to close by 11 p.m.,” he added. “This conditional-use approval will allow the business to operate as a cocktail lounge.”

Basehart said that the Grille was requesting the conditional use because it hopes to fall under a state license that would allow it to make less than 51 percent of its daily profit from food sales.

Owners Dustin Parfitt and Juan Gando told council members that usually they make the bulk of their income from food sales, but that during busier months — especially around holidays — events, company parties and the added boost from seasonal residents have pushed alcohol sales higher.

“We’re not trying to break any rules,” Parfitt said. “We just want to be competitive with other restaurants. If we close at 11 p.m., everyone is just going to go [somewhere else], and they make money. We have to be competitive to make our money for the season and last through the summer.”

Last month, Wellington’s Planning, Zoning & Adjustment Board recommended approval of the measure with several conditions. The Grille would have to continue to operate as a restaurant and serve full-course meals the entire time alcohol is served.

It also must adhere to noise restrictions, have no outdoor entertainment and is prohibited from transferring the conditional-use approval to a new owner or business.

But staff did not recommend approval of the measure, Basehart said.

“Staff believes the proximity of the property… is way too close to residences to justify a nightclub or cocktail lounge,” he told council members. “Secondly, there’s a history of complaints from the property.”

Though he said he thought the Grille has done a good job in addressing complaints — many which came from when the property housed a different restaurant — he still had concerns.

Vice Mayor Howard Coates asked Basehart whether he thought the conditions would help cut down on noise. Basehart said he believed they would.

“We are not changing our recommendation,” Basehart said. “But we acknowledge that the conditions of approval substantially mitigate the concerns that we have. We have no strong objection to the approval of this application.”

Coates asked whether Wellington had expanded hours of operation for any other restaurants.

Basehart said that several locations, including Graffito South, the Players Club and the Gallery at the Palm Beach International Equestrian Center, had extended hours.

Village Attorney Jeff Kurtz also pointed out that the McDonald’s on Greenview Shores Blvd. is open 24 hours, and that the council also approved extended hours for Dunkin’ Donuts on Forest Hill Blvd.

Kurtz noted that the Players Club is subject to regulations by the village, as well.

Coates said he was looking to establish continuity in the way Wellington addresses similar requests.

“We have to have some consistency in how we address these issues,” he said. “They are literally all over the board. If we don’t allow this request, is it fair to this business that the Players Club is allowed to remain open as late as it is? We have a precedent where this is allowed.”

He pointed to the Dunkin’ Donuts. “You can literally jump from the roof of Dunkin’ Donuts into the community next to it,” Coates said.

Councilwoman Anne Gerwig asked how the restaurant owners had addressed complaints. Basehart said that code enforcement continued to visit the restaurant and that noise regulations were not violated again. “We haven’t heard a complaint since,” he said.

During public comment, the crowd was enthusiastically in support of the Grille.

Alexander Zilo, representing the Equestrian Forum, said that the changes would keep people in Wellington.

“Instead of going out to Palm Beach or Clematis, they will stay local,” he said.

He also spoke highly of Parfitt and Gando, specifically for creating a safe environment.

“We know from our own children that they check IDs very closely,” he said. “I feel comfortable having my daughters go to his facilities.”

Speaking to council members, Gando said that he and his partner are particularly concerned about the safety of their guests late at night. “We pay cab companies to stay at our restaurant,” he said.

Gando added that having the conditional use was integral to being able to have the state license — which cost $80,000 — and to be competitive.

Both Gerwig and Willhite said they thought 2 a.m. was too late to be open.

“I think that 1 a.m. on Friday and Saturday nights is acceptable,” Gerwig said. “And I believe they should close at 11 p.m. on weeknights.”

She also expressed concerns about the noise caused by outdoor dining if it were to continue late at night. “That was the problem,” she said. “It hasn’t been the indoor noise. It’s people outdoors, and they’re yelling.”

Gando said he would agree to provide extra buffering and stop serving food outside at night.

Councilman John Greene made a motion to allow the conditional use with the conditions imposed by the zoning board, as well as disallowing outdoor entertainment and adjusting the hours of operation from 7 a.m. to 11:30 p.m. from Monday through Thursday and from 7 a.m. to 1 a.m. on Saturday and Sunday.

Additionally, the Grille would be subject to an annual audit and a requirement that the total annual food sales be at least 51 percent.

Kurtz explained that was not the same as the state requirement. “We won’t look at it on a day-by-day basis,” he said.

The motion passed unanimously, and Margolis asked whether the owners could return at any time to ask for further adjustments.

Kurtz said that the motion would have to be made without prejudice for that to occur, and suggested that the council reopen the motion.

“They cannot come back within a year for conditional use unless the motion is made without prejudice,” he said.

Greene amended his motion, and that also passed unanimously.