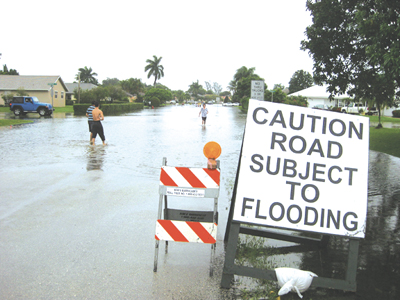 As floodwaters begin to subside, Wellington officials said they will continue to work around the clock to help those areas most damaged by the crippling rainfall from Tropical Storm Isaac.

Though northern sections of the village are drying out, areas to the south — mostly in the Wellington Equestrian Preserve — continue to be a problem, Deputy Village Manager John Bonde told the Town-Crier Wednesday.

“As bad as it was in the northern half of the village, it was far worse in the south,” he said. “We understand the frustrations our residents have, and we’re doing everything to mitigate those issues.”

Additionally, Wellington is continuing to address concerns regarding septic tanks and mosquitoes, which are often a problem following flooding.

“We’re trying to get water levels down so it doesn’t continue to affect the drain fields,” he said. “Wellington will be doing additional spraying for mosquitoes, and the county is doing aerial spraying.”

Roadways south of Pierson Road continue to be an issue, and it could be several days before the village returns to normal, Bonde said.

Among the most flooded communities were the Aero Club, Binks Forest, Meadow Wood and Oakmont, but none was hit as hard as the equestrian communities — especially Palm Beach Point.

“There is a significant amount of water there,” Schofield said. “This rainfall was beyond what the [drainage] system was designed for.”

He said, however, that there had been no incidents of homes flooding. “We have not identified a place where the actual living area was flooded,” Schofield said. “In some homes, the water is up on driveways or in the pool. In the Saddle Trail community, there have been some septic tank failures.”

The only community to have structural damage, he said, was Little Ranches.

“Some of those barns, especially those that predate incorporation, have several feet of water in them,” he said.

Schofield also quelled rumors that Wellington had shut off its pumps. “We’re still pumping at the maximum rate,” he said.

Bonde said that Wellington has made progress since the rain stopped Tuesday afternoon, and he hopes to see the community dry out soon.

“We’re looking at the weather forecast and we think it will be a good dry period with wind. We’re crossing our fingers, and barring more rain, things should be back to normal in five or six days,” he said.

Mayor Bob Margolis said Wednesday that he’d been on a tour of the village and felt Wellington was “doing better.”

“Pierson Road looks good except for a few pockets,” he said. “But the farms and barns out in the Equestrian Preserve are pretty much flooded.”

Wellington had an unprecedented 17 inches of rain between Sunday and Tuesday — far more than was dropped on the village during the hurricanes of the past decade.

“The 17 inches of rain has been validated,” Bonde said. “Twelve inches is a one-in-100-year event, but to have 17 inches… no one could have anticipated that.”

Margolis agreed. “This was the 100-year storm,” he said. “Everyone said to prepare for the worst and hope for the best. I don’t think I will see this much rain again in my lifetime.”

The so-called “100-year storm” for Wellington — a theoretical worst-case-scenario storm that governs building elevation and water control regulations — was anticipated to generate 12.5 inches of water.

“Homes are set at 100-year flood elevations, plus 2 inches,” Bonde said. “There’s nothing we could have done. We did prepare, we had water blowing out of here a week in advance, but we didn’t anticipate that sort of storm. Most residents have never seen this sort of storm.”

Bonde said that Wellington began to prepare for the storm early, lowering the water level in its canals as early as Tuesday last week. “The prediction at that time was that it was going to be 4 to 6 inches of rain,” he said.

But a large band from the storm sat over the western communities, dropping near-constant rainfall that overflowed canals and flooded roads and properties.

Schofield told council members that this storm brought more than double the rainfall of the most recent hurricanes.

“When Hurricane Frances came through in 2004, it brought 8.1 inches of water over four days,” he said. “[Hurricane] Jeanne brought 5.5 inches over three days, and [Hurricane] Wilma had 2.2 inches. Hurricanes typically move faster and never had this type of rainfall associated with it.”

Bonde said that Wellington had 10 pumps operating at maximum capacity. “They were working around the clock,” he said. “But we were getting inundated with rain faster than the system is designed to move water. We were losing the battle as it was coming into Monday night. By 11 p.m., the waters were still rising.”

Wellington was able to get permission from the South Florida Water Management District to turn on its emergency 11th pump station, which drains into the Arthur R. Marshall Loxahatchee National Wildlife Refuge.

“We have very rarely had to use it,” Bonde said. “I have been here 10 years, and we have never used it.”

Schofield said that Wellington has been draining an average of 700,000 gallons of water a minute since last Wednesday.

Bonde said that Wellington would take advantage of any emergency federal financing to make improvements to areas that had the worst flooding.

“Even if a storm like this never happens again, we want to make sure those areas are protected,” he said.

He said that Wellington is using this experience to improve its stormwater management. “We are mapping everything,” Bonde said. “We’ll use this data to discuss improvements we can make for the future.”

Margolis said that though no one could have expected this amount of rain, he believes Wellington was as prepared as it could have been. “We have to have some discussions about what we might do in the future,” he said. “Paul [Schofield] has some ideas. Some of our vehicles may need to be a bit higher, and we may need to increase the height of some of the roads. It’s going to be a learning experience.”

Bonde lauded Wellington’s staff for their hard work throughout the storm.

“I can’t say enough about how well our staff performed,” he said. “We had people refuse to go home because they wanted to help. That’s the type of commitment we have from our staff.”

Margolis agreed. “Our staff did everything it could and better,” he said.

Though Wellington’s outlook is bright, he noted that not everyone has had the same luck.

“I hope everyone gets through this safe and sound,” Margolis said. “Our hearts go out to those communities that continue to be affected by this.”

Above: The sign says it all on the 12th Fairway near Wellington Trace.