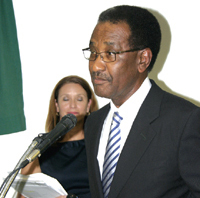 Amid standing-room-only supporters and eleventh-hour naysayers, the Loxahatchee Groves Town Council gave final approval Tuesday to comprehensive plan amendments and a resolution that will allow Palm Beach State College to proceed with the development of its fifth campus on a 96.7-acre site on Southern Blvd. known as the Simon property.

Much of the three-hour meeting was spent reading more than 100 comment cards both for and against the project, or listening to residents’ comments.

The resolution approved a master site development plan — a broad framework for what Palm Beach State intends to do with the property over the next 50 years, according to town planning consultant Jim Fleischmann.

In June, the council recommended transmittal to the state’s Office of Economic Opportunity with little public comment. The amendments were returned with no comments or objections from Tallahassee, Fleischmann said.

Bob Bentz with Land Design South, representing the Simon family, said the first comp plan change would allow the development of the southeast 21 acres of the site. Plans call for the developers to pay for standard paving on B Road from Southern Blvd. to Collecting Canal Road and open graded emulsified mix (OGEM) paving from Collecting Canal to Okeechobee Blvd.

During public comment, Marsha Newell asked how much the town would sacrifice in tax revenue if the council approved the changes.

Councilman Ron Jarriel said the use had been agricultural before the mixed-use designation was given a year ago, which garnered very little tax revenue. “With 21 acres of commercial, the taxes will be 10 times the amount we have gotten over the years,” he said.

Vice Mayor Jim Rockett made a motion to approve the change, which carried 5-0.

The next amendment brought the 75-acre campus property back to low-density residential and incorporated a special policy that will govern future development of the college campus. “This ensures that the town will have the opportunity to participate in planning,” Fleischmann explained.

Councilman Tom Goltzené said he was concerned about the planning guidelines, including the buffers. Since the applicant is not required to submit specific site plans with a comp plan amendment application, he used the right-of-way buffers on Southern Blvd as an example. The guidelines call for one tree every 60 feet at least 12 feet tall and hedges 30 inches tall. “I think we’re getting a real short shrift with what’s being proposed by the landscaping,” Goltzené said.

Collene Walter with Urban Design Kilday Studios, representing the college, said they would have a detailed presentation, but the item under discussion was the comprehensive plan amendment.

Nina Corning asserted that if the council agreed to the amendment, it would no longer have regulatory power on the land. She also asserted that the plan would allow a potential student body of 138,000. “Once you approve this, you can’t go back,” Corning said.

But attorney Brian Seymour, representing the college, said the number Corning was referring to is full-time teaching equivalents, not individual students, pointing out that Miami-Dade Community College, the state’s largest college, does not have that many students. “Traffic concurrency limits the number of students,” Seymour said.

Indian Trail Improvement District President Michelle Damone said she anticipated her daughter would be attending the college if it is built. “I’m actually very jealous of your community,” she said. “If only I could have a college instead of all that commercial we have. I think the location is perfect.”

County Commissioner Jess Santamaria said the campus would be good for the community. “I actually encouraged [PBSC President] Dr. [Dennis] Gallon to select this site. The people who will benefit the most are your children and grandchildren,” he said.

Rockett made a motion to approve the amendment, which carried 4-1 with Goltzené opposed.

Town Attorney Michael Cirullo pointed out that the 4-1 vote was sufficient under the town charter requirement for super-majority approval of comp plan amendments.

The council also approved a resolution for the master site plan.

Seymour said the resolution has provisions requiring the college to work with the town, following guidelines in the town’s comp plan.

Gallon pointed to the school’s history of developing campuses with respect to the environment.

The Lake Worth campus is 114 acres that was given to the college by the county in 1955. “It was quite barren, and there was not much in the area,” Gallon said. “We have taken great pains to develop as it is today. It is one of the most well-preserved areas in that location.”

He said the Palm Beach Gardens campus would be the nearest model to the way the college would like to develop the Loxahatchee Groves campus because it already has a lot of foliage on it. “It’s been well-preserved and has good boundaries,” Gallon said. “That is what we hope to duplicate on this campus.”

Jose Murguido of Zyscovich Architects, representing the college, said the abundant foliage on the property will give the college a running start. “It has wetlands, cypress knees and great edges,” he said. “That will create the connection to the community. It has a rich ring of buffers, and a lot of material is already there. The idea is to preserve it.”

Walter, who is a registered landscape architect and land planner, said one primary goal is that the site design incorporate natural areas. “Starting from the outside and working in, we will look at more than what the town code requires,” Walter said. “We want to be sure it fits in with the community.”

Murguido also pointed out that the master plan is a 50-year plan and the college intends to begin development on the south end. “For all intents and purposes, the land will remain virgin for a long, long time,” he said. “It will be consistent with the rural vista guidelines. The important thing is the spirit and vision that it carries to preserve the beauty of the town.”

Goltzené said he was disturbed that the master plan had no specifics on how the site would be developed. “They don’t have any idea at all what they’re going to do,” he said.

Rockett said it was clear to him that college representatives had listened to the town’s suggestions and made the changes that it could. He said he had driven up to see the Palm Beach Gardens campus, was impressed and added that he’d also noticed the healthy commercial community there.

Lung Chiu, inspector general for the Palm Beach County School District and a member of the town’s Finance Advisory & Audit Committee, said that as a 12-year resident, he supports the project. “I believe this is the best thing that has happened to Loxahatchee Groves,” he said. “I can tell you my family of five wholeheartedly support this project.”

Mayor David Browning said he disagreed with those who oppose the college because it would not contribute to the tax base. “There are a lot of churches in Loxahatchee Groves that do not benefit me, but I’m not going to say there’s nothing in it for me,” he said.

Darlene Snowball said she was 100 percent for the college. “My son could be going to this college instead of Palm Beach Gardens to get his engineering degree,” Snowball said. “I would go back to school myself as soon as this college is built.”

Goltzené said he was going to vote for the resolution but that he would have preferred a larger buffer to the north than the 50-foot one in the master plan.

“I had other ideas of preservation,” he said. “All I can do is trust them that they will do what they say.”

The motion, made by Rockett, carried 5-0.