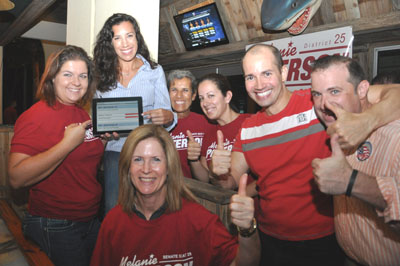 “I appreciate the opportunity, and all the voters who came out and voted for me,” Peterson told the Town-Crier Wednesday. “I am looking forward to representing Palm Beach County in the state senate.”

Peterson said that while the race was closer than expected, she is proud of the campaign she ran. “We went to all the editorial boards,” she said. “We were very transparent with who I am and what the issues are.”

But, she said, her eye has been set on the general election from the beginning.

“I think we always had our eye on November and on job creation in the county,” she said. “We’ve taken a pretty large approach. There are so many different needs in different areas of the county.”

The top issue for all areas is jobs, she said. “We have got to get people in Palm Beach County back to work, and create an environment where small businesses can grow and thrive, Peterson said.

She noted that Palm Beach County has a high home vacancy rate, which continues to be an issue for her. Another issue she is focusing on is homeowners’ insurance.

But all of these issues tie back to one thing: jobs.

“If we can get more jobs here, we can get people in homes,” she said. “We can make the insurance market more competitive and see more realistic rates.”

She also wants to focus on helping the Glades area.

“We need to get an enterprise zone out there,” she said. “We need to get jobs out there by stimulating businesses to invest, then have job training available for citizens.”

In the rest of the county she said she’d continue to focus on building infrastructure.

“When I took office in 2008, we were in a global recession,” he told the Town-Crier Wednesday. “Coming out of it, we need to make sure Florida is in the best position to take advantage of our global economy.”

He said he hopes to pass the Student Global Education Act, which would offer incentives to university students to take courses in Mandarin or Portuguese.

“Most of our domestic trading partners are from China and Brazil,” he said. “Yet we have a work force that doesn’t speak the language.”

Abruzzo said he also hopes to help business start-ups by passing a bill that would allow new startup companies to pay no corporate income taxes for three years.

“What are you doing in your first three years as a business owner? You’re reinvesting into your business,” he said.

Abruzzo stressed that he has a proven track record over the past four years. He has gotten 20 bills passed, many of which support business in Florida. He also noted that he has been a champion of bringing an inland port to the Glades area.

Senate District 25 takes in all of western Palm Beach County, from west Boca Raton, north to parts of Palm Beach Gardens, taking in all of the western communities and the Glades.

In the race for U.S. Congress in the newly drawn District 18, voters set up a race between U.S. Rep. Allen West and businessman Patrick Murphy.

District 18 takes in parts of Royal Palm Beach, Loxahatchee and The Acreage, as well as northern reaches of Palm Beach County and all of Martin and St. Lucie counties.

Above: Melanie Peterson (second from left) and supporters celebrate the election results Tuesday night at Flanagan’s in Wellington.