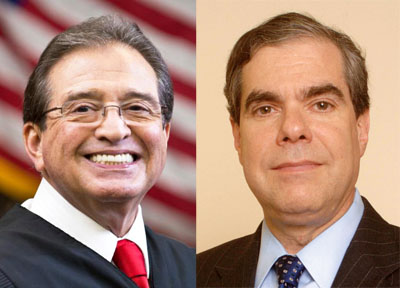 Circuit Court Judge Ron Alvarez (above left) faces a re-election challenge from attorney Jaimie Goodman (above right), who hopes to take his place on the bench.

Both Alvarez and Goodman are up for the Group 9 seat on Aug. 14. The election is nonpartisan and open to all Palm Beach County voters.

Goodman, 54, of Jupiter, was born in Queens, N.Y. He received his bachelor’s and law degrees from Cornell University. He has more than 25 years of courtroom experience and 29 years of litigation experience in state and federal courts.

After graduation, Goodman worked for five years as in-house counsel at General Motors in Detroit. In 1993, he opened a private practice catering to civil rights victims in employment discrimination cases, moving his practice to West Palm Beach in 1999.

In 2010, he ran for election to the Circuit Court Group 33 seat and came in second in a four-way race won by Lisa Small.

Goodman decided to run because Alvarez will not be able to serve his full term due to the state’s mandatory retirement age, meaning the governor will appoint a new judge in his place. “He’s required to step down with less than one-third of his six-year term served,” Goodman told the Town-Crier.

This is a problem, he said, because voters don’t get a voice. “Under the Florida Constitution, voters have the right to elect their circuit court and county court judges,” he said. “I don’t believe in the appointment process. I believe voters should decide.”

Goodman said that he would be a hard worker who listens to those who come before him. “What’s important is that everyone gets a fair shake in the courtroom,” he said.

Goodman noted that his campaign is entirely self-financed, something he decided to do in order to maintain independence. “My campaign does not accept contributions from attorneys or anyone else,” he said. “People’s faith in an independent judicial system is very important to me.”

He said voters should choose him because he will be a fair, impartial and ethical judge. “I hold myself to a higher ethical standard,” he said. “I care about our community, and I am the only candidate in this race who can serve a full term.”

Alvarez, 67, is a native of Indiana. He earned his bachelor’s and law degrees from Indiana University. In 1972, he moved to Palm Beach County and began working with a private firm doing jury litigation.

He later opened his own practice, where he remained until 1992 when he applied to the Judicial Nominating Committee. He was appointed a circuit judge in 1993.

Alvarez has served on the bench for 19 years, with 13 of those years spent in the juvenile division, something he considers his passion.

“You can really help people,” he said. “I never give up on my kids, no matter how much trouble they have or how many times they come before me with issues.”

Alvarez has been an advocate for juveniles in the court system, and championed a program that brings therapy dogs into the courts to help ease stress. He said he’d like to expand this program.

“It makes an amazing difference,” he said. “The kids walk in all stiff, but after a few minutes of interacting with the dog, they relax. If a child has to testify, we bring the dog and handler up there to provide support.”

Though he will have to leave the bench in October 2014, Alvarez said he hopes to continue his work as a senior judge.

“I still have a lot to accomplish,” he said, noting that he’d like to see a mental health court for juveniles as well as equal plea offers given to youth that are offered to adults charged with drug crimes.

Alvarez said voters should choose him because of his experience and passion for his job. “I am the most competent and qualified candidate,” he said. “I have the expertise, and I don’t have blemishes on my record.”