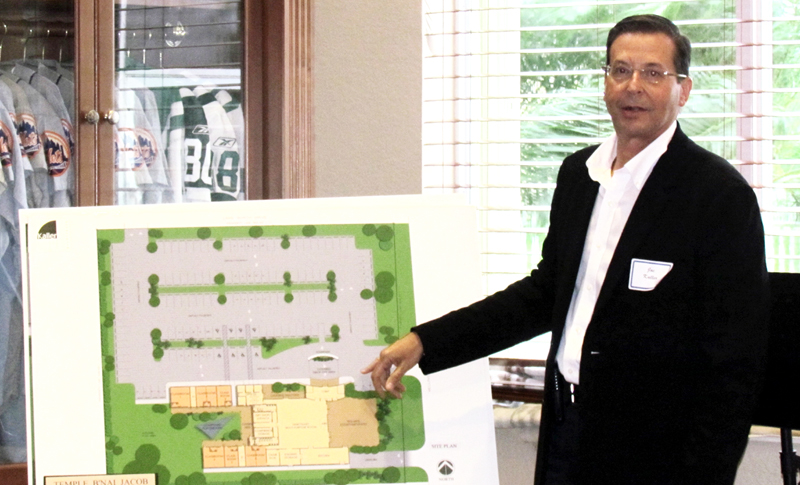 After five years in the community, Temple B’nai Jacob is moving forward with plans to build a new synagogue.

More than 40 temple members gathered on the stormy Sunday afternoon of Aug. 26 for a reception at the home of Eve and Bruce Sauer to review and discuss the plans with building committee members and architect Joseph Kaller.

The congregation is highly anticipating the 13,500-square-foot facility. The new building is projected to be more than six times the size of their current facility, which is a leased storefront inside the original Wellington Mall.

The new location is at the corner of Lake Worth Road and Barefoot Lake Drive between the Isles and Wellington Shores communities. Initial funding for the project was donated by a generous supporting member, who prefers to remain anonymous.

Temple B’nai Jacob is a Conservative temple founded five years ago by a small group of young Jewish families as Congregation B’nai Avraham.

“We started with three children in our Hebrew school, and now we have over 60,” Rabbi David Abrams said. “Within five years, we really blossomed a lot, and we really outgrew our first location.”

Mel Kohan was one of the founding members of the temple. He became involved because he saw the need for a Conservative congregation in Wellington.

“All the places I’ve lived before in Connecticut, Parkland and West Palm Beach, all had many types of synagogues, and I felt that we needed one here in Wellington,” he said.

Kohan contacted the United Synagogue of Conservative Judaism’s regional office. “I spoke with the director, and he said that they also realized demographically that Wellington was a good place to start a new Conservative synagogue,” Kohan said. “We began by having meetings in Wellington, and people showed up, and soon enough we were having Friday night services.”

Advisory Council co-chairs Brad and Shana Chase remember the first temple meeting, which was at their home in Wellington. “The rabbi was there, and that was before we even had children of our own,” Brad recalled.

Now, five years later, at 135 member families and growing, the synagogue is running at full capacity, as more and more people join. “People are starting to take notice of everything that we do,” Kohan said.

At the reception, building committee leaders discussed the importance of the facility to the temple and its members, and explained the first phase of the development project, which includes a capital campaign to raise more building funds.

“This is our kickoff dinner to officially open the campaign and get all the members involved,” Solomon said. “This is kind of like our plea for help from everyone to help us get this going, because it is going to happen.”

Kaller presented the first mock-up of the building and answered questions. “The whole process has been wonderful,” he said. “Working with the committee and the members has been great, particularly putting everyone’s ideas and needs into the design.”

This is a tremendous improvement, said education director and committee co-chair Andrea Cohan. “The children are very important to our temple, and there will be a lot of space for our education programs to grow,” she said.

After committee members make all the necessary improvements and revisions, the site plan will go before Wellington officials for approval.

Solomon is hoping that the new synagogue will be a place for members to learn and grow. “We want this to be a place where we can pass on to our children the same religious education we received when we were children,” he said.

Morry Silverman, co-chair of the building committee, is campaigning to get members to volunteer and donate their time and money to assist in the development of the new synagogue. “It’s not easy asking people to help out,” he said. “It’s something I feel uncomfortable doing, and I know a lot of people are, but we have to do it.”

The facility will cost $2 million to build, and the temple has raised almost $1 million. A groundbreaking is planned for spring 2013, and completion is expected in the spring of 2014.