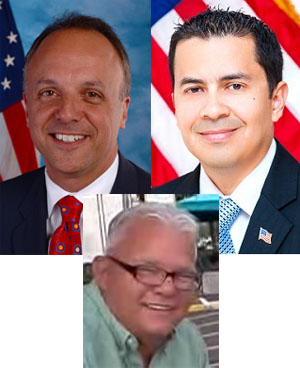 Like the 19th Congressional District that Deutch currently represents, the new district trends Democratic. So much so, the Republican Party is not even fielding a candidate to challenge Deutch.

However, two candidates without a party affiliation, Cesar Henao and Michael Trout, are on the ballot. Henao argues that the American people are suffering because members of Congress are not working together, while Trout advocates strict term limits on federal officials to return control of the federal government to the people.

The new district covers all of Wellington, in addition to large parts of the South County area. Previously, Deutch only represented a tiny sliver of Wellington.

“I think what people want in this congressional election is someone who is able to get things done even in this difficult partisan environment,” Deutch said. “I’m proud that since going to Congress, and in the past two years as a member of the minority in the House, I have passed significant legislation.”

As accomplishments, he listed bills to crack down on the Iranian nuclear weapons program, help homeless veterans and address the situation of contaminated Chinese drywall. “Every one of those is bipartisan, and if it’s possible to work together to get things done, I work hard to find a way to do it,” Deutch said.

In fact, he has introduced a bill that would do just that. Deutch also supports the Affordable Care Act and keeping Medicare largely unchanged. “With respect to Medicare, the Affordable Care Act saves $716 billion by cracking down on fraud, reducing overpayments to insurance companies and encouraging the coordination of healthcare,” he said, adding that it would also encourage coordination of care to cut costs by eliminating duplicative efforts.

Deutch also supports cutting the cost of prescription drugs to extend the life of Medicare.

Deutch also led efforts to expose errors and fraud in the recent voter purge in Florida. “The most important thing that we can do, I believe, to restore confidence in the American people is to ensure the integrity of our elections,” he said. “That’s why I called out the governor when he tried to purge tens of thousands of eligible voters from our voting rolls. That’s why I have called for a bipartisan panel to investigate the charges of voter registration fraud, and that’s why I have introduced a constitutional amendment to overturn the Citizens United [decision] and get corporate money out of our political system.”

As a member of the Foreign Affairs Committee, he has focused on national security, particularly on the threat of a nuclear-armed Iran. “I have sponsored key pieces of sanctions legislation. I have tried to stop the Iranian nuclear weapons program,” Deutch said, calling it “the most significant national security issue we face today.”

Deutch has also taken an active role on animal-related issues, including the prevention of horse slaughter. He’s been working with State Rep. Joseph Abruzzo. “It’s an issue that he has worked on in Tallahassee and I have worked on at the federal level,” Deutch said. “It’s a black mark on the country the way we still permit horse slaughter, and we’re going to try to end that.”

Cesar Henao — Henao, 35, is a native of Columbia who came to the United States at age 12.

“People are tired of the two-party system and the do-nothing Congress,” Henao said. “I think it’s my duty as a citizen to actually give back to the community as a representative of the people.”

Henao’s study of political science allowed him to work as an intern in the House of Representatives in 2007, which he said gave him insight into the way the system works. “I’m not a Washington insider, but I’ve been there,” he said. “When you work in a congressman’s office, you learn the dynamics of how Congress works, the staff, the requirements of how a law gets introduced.”

Married with two children, Henao has lived in Greenacres since 1990. “I went to middle school and high school in the district,” he said. “I have lived here most of my life.”

Henao said the people he has talked to are tired of partisan politics. “They’re tired of congressmen not doing anything to solve the problems that we have,” he said.

The main issue is jobs or better jobs. “How do we get people back to their normal levels and the work that they either studied for or enjoy doing?” he said.

Henao would like to create a skills gap program to provide high school certification for students in technical programs who do not want to or cannot afford to go to college. “Many high school students are not graduating with a real skill that would allow them to do some of the jobs, especially technical jobs,” he said.

Henao said he feels like David challenging Goliath in running against Deutch, who is backed by the Democratic Party.

“Just because he’s part of the machine, part of the establishment, doesn’t mean that he can’t be beaten, and the American people are tired of that kind of politician,” he said.

Henao feels for the people who have been hurt by the housing collapse. “The government bailed out Wall Street, they bailed out the banks, they also bailed out the auto industry,” he said. “The people they forgot to bail out were the American people.”

To inspire parents to be more supportive of their high school students’ schoolwork, Henao also would establish a $500 tax credit for parents of students who maintain a 3.5 grade point average or higher with good behavior.

“Being an independent candidate, I don’t have to ask permission from my political party to bring ideas that people in the district are actually fighting for,” he said. “A lot of the Republicans and independents and even Democrats are supporting our campaign because they feel disenfranchised.”

Mike Trout — Trout, a resident of western Boca Raton who has never held public office, describes himself as a “progressive independent candidate.”

His main concern is the home foreclosure crisis, but he thinks there are many issues that need to be fixed. “[The foreclosure crisis] is the real bleeding-in-the-street issue,” Trout said. “We just really have to put a stop to that. In 2005, there were 50,000 foreclosures in the whole country. By 2008, it was up to a million… and it looks like we still have more waves coming. It’s not getting better despite the pseudo-remedies that have been put out there.”

Trout favors a constitutional amendment imposing term limits on all national elected offices with the goals of returning control of government to the people. “You should go and serve your term, serve your people well and then move on,” he said. “You’re going to get to that office with your best ideas on the first term anyway.”

He pointed out that former Congressman Robert Wexler held his seat for seven terms, which Trout thinks is too long. “Robert Wexler abandoned his congressional seat to go take another job, and when he did that, Ted [Deutch] abandoned his Florida legislative seat to run for Wexler’s seat, which caused two special elections,” he said.

The change would create more time for officeholders to actually work for the people, rather than fundraising for reelection, he said. “You pay a congressman $174,000 a year to work for you full-time, not to be campaigning,” Trout said. “That time is fatiguing and taking away from his best mental abilities and physical abilities to do the job.”

Trout said he believes there is a disconnect between members of Congress and the communities they serve.

“The average household income is $49,000 a year, and a congressman is making $174,000 a year, so there is a socioeconomic disconnect there,” he said. “My suggestion is that you pay a congressman based on what the people make, so if in your district the average income is $49,000, it’s $49,000 times two because they have to have two households, one in Washington and one at home.”

If the constituency’s income goes down, the representative’s salary would go down proportionally, he said, adding that merit raises could be available for those who do the job well. “I want everybody to hear the idea,” he said. “It’s well-received when I talk to people about it.”